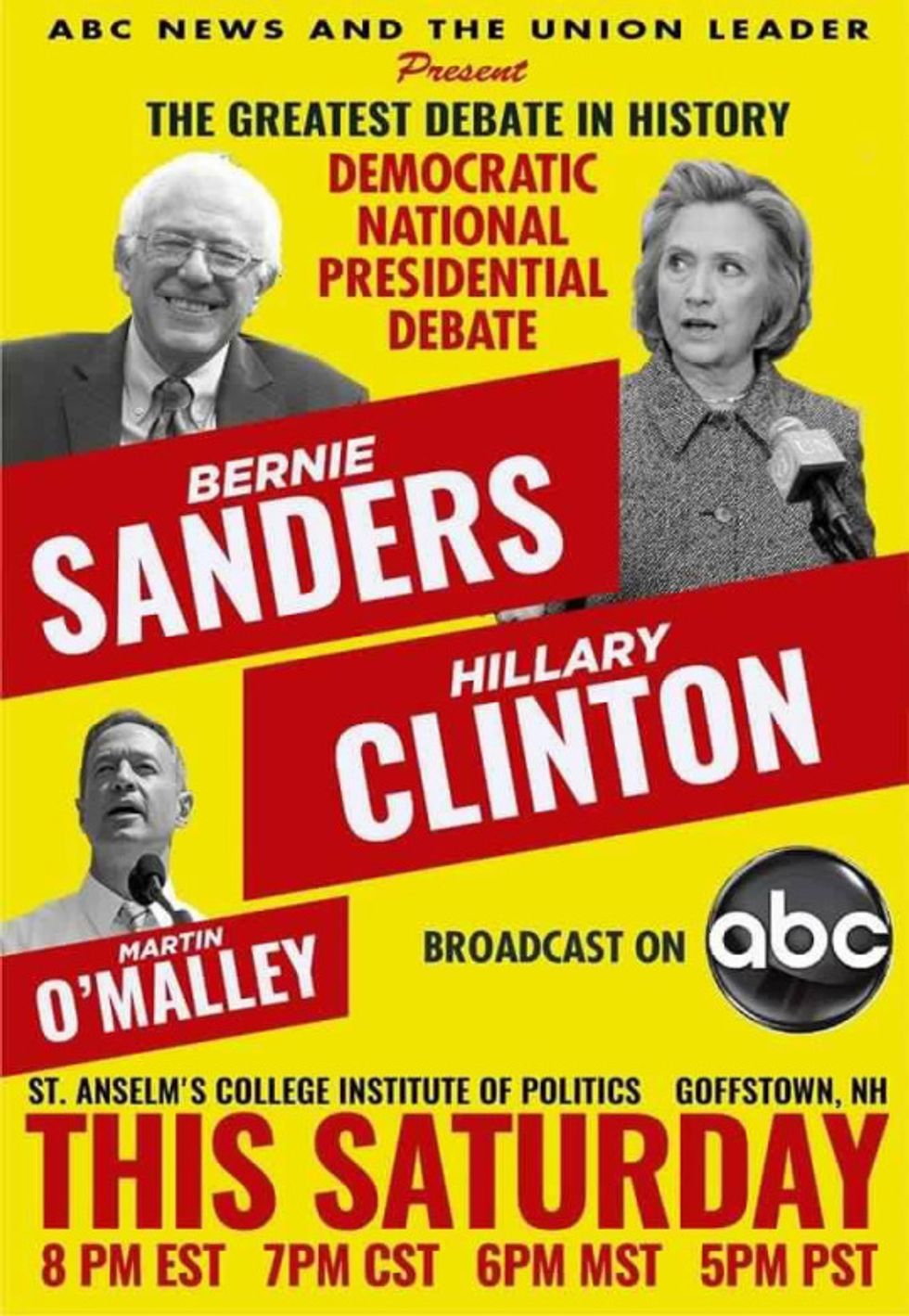 Are you all ready for the most important televised debate of the 2016 election? It should be sometime in the spring, we think. In the meantime, here's this sad bit of programming that both Bernie Sanders and Martin O'Malley have been pointing at for months as Exhibit A in the case that the DNC has been trying to keep their campaigns from getting any attention. Sure, a third of the country is off seeing that new Buck Rogers space movie, another third is packing/shopping/traveling for the Sacred Baby Festival, and whoever's left is probably watching whatever people watch on a Saturday night (f'ball or porn or both). But come Monday, we happy few, we band of Wonkers, can proudly say, "I watched the third Democratic Debate this weekend," and people will look at us and ask, "Oh, was that on? Huh." But we can feel quietly superior for our dedication to the grand pageant of American Democracy, now can't we?

And by god, we can be proud that nobody at this debate will be pledging to exclude Muslims from America, or bickering over who can most effectively convert Middle Eastern people into radioactive dust, or competing to scare the snot out of us. So let us be glad, and preview this debate in the time honored Question and Answer format that has served us so well in the past:

What time is the debate?

It starts at 8:00 p.m. Eastern, which is 5:00 p.m. Pacific and other times elsewhere. Just look at the poster up there. There will probably be some talking beforehand, though possibly not as much as you would find on a cable network.

Where is the debate?

It's on the talking-picture box on the ABC television network, check local listings blah blah blah. The debate itself will take place at St. Anselm's College in Goffstown, New Hampshire, that mythical land of Hobbits.

I don't do TV. Will this thing be livestreamed?

Don't you get all superior with us, little miss or mister. TV is good for you. But the debate will indeed be livestreamed on ABC. That would also be the link for weirdos who want to see every last scrap of spin room antics. Maybe Martin O'Malley will sing!

Will DataBreachGazi be an issue in the debate?

[contextly_sidebar id="ueaZjUBAS8zVd8B1kzWHzGf59NMJtoER"]Given the number of Wonkette readers apparently willing to strangle each other completely dead in the comments sections in each of the pieces we've run on the story, we'd guess this kerfuffle may actually increase viewership by hundreds nationwide, if only to see whether Hillary Clinton says, "Bernie, we're tired of hearing about YOUR damn emails, too." Which won't happen, probably, but we'll be watching for some variation on the theme anyway. While Sanders campaign manager Jeff Weaver has been all over the teevee accusing the DNC of rigging things in Clinton's favor (like, let's say, scheduling a debate for a time when it will be lucky to match a rerun of Matlock in ratings), Weaver says his candidate plans to stay above the proverbial fray (which really is the only kind of fray there is. Have YOU ever seen a real fray?):

He is a very issue-oriented candidate. Always has been, always will be," Weaver said. "He will, given the opportunity, talk about the substantive issues facing middle class and working class people. Period. That is what he will do.

Needless to say, Weaver immediately added that the DNC screwed up its data management and some staffers simply couldn't help themselves from helping themselves, but that's all fixed now:

Now, if the issue is raised, I think what he will say is that the DNC dropped the firewall between the candidates, some young staffers on our campaign, inappropriately took advantage of that and may have looked at some Clinton data. One of them has been fired, others are being investigated. There may be more discipline handed out to employees as a result.

Also, there was a slight weapons malfunction, but uh... everything's perfectly all right now. We're fine. We're all fine here now, thank you. How are you?

Team Clinton is still pretty pissed that those punk kids in the Sanders campaign went looking through their voter data; spokesman Brian Fallon accused the Sanders staffers of acting "like kids in a candy store" who "went hogwild" downloading data that could tip off the Sanders campaign to Clinton's strategy. There may have been some other clichés in the statement, too, but we were only skimming.

Will this help Martin O'Malley?

Yeah, sure, lots, why not? And maybe Lincoln Chafee will hop back into the race, too!

Did you see the new Star Wars yet?

We liked the parts where the spaceships went "whoosh!" and "pew-pew-pew!" (damn, sorry about the spoilers!)

Will Wonkette be liveblogging the debate?

Sadly, we will not, because the previous Saturday debate, while fun and (yawn) fascinating, got really low pageviews, and it wasn't even competing with a major holiday. But Yr Dok Zoom will be right there in the comments with you all, riffing along like we're all in the front row of Mystery Science Theater 3000. Except for the part where our GF is bringing over Chinese takeout and we are already so hungry for that.

Wouldn't it be cool if MST3K liveblogged the debates?

Yes it would. Crow T. Robot would make a good president. Until he signs that executive order giving him the power to decide who lives and who dies.

Who'll be singing the National Anthem?

You're just going to quit halfway through and watch Doctor Who on Netflix, aren't you?

It'll be our little secret.

Will you embed Santa Claus Conquers the Martians so we can watch it after the debate?

Wouldn't dream of it.

UPDATED QUESTION: Why aren't they getting any questions about the economy or rogue cops?

Could be some doofus forgot to mention this is a designated foreign policy debate. Yeah.