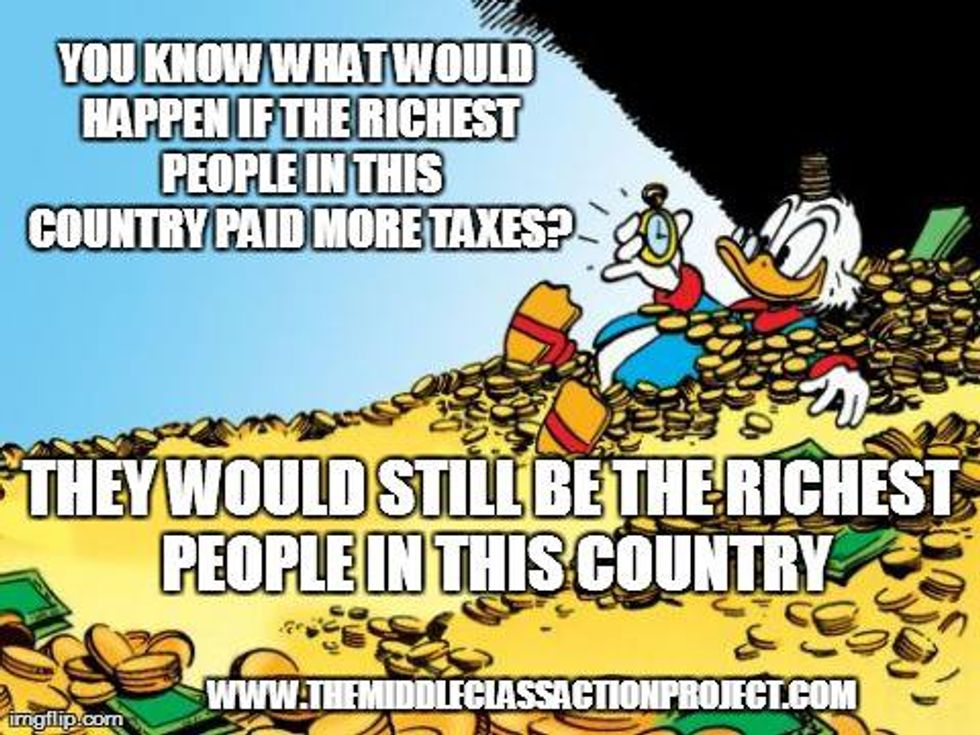 Looks like it's time for another of those post-election reinvention crazes that political parties are so big on. A bunch of top Democrats, perhaps noticing the rave reviews that Elizabeth Warren has been getting from The Base -- that's why they made her Queen of the Democrats -- are mulling over the possibility of rebranding the party with a more overt We Luv Middle Class And Wall Street Sux message. Tell us more, WaPo's Lori Montgomery and Paul Kane:

The centerpiece of the proposal, set to be unveiled Monday by Rep. Chris Van Hollen (D-Md.), is a “paycheck bonus credit” that would shave $2,000 a year off the tax bills of couples earning less than $200,000. Other provisions would nearly triple the tax credit for child care and reward people who save at least $500 a year.

The windfall -- about $1.2 trillion over a decade -- would come directly from the pockets of Wall Street “high rollers” through a new fee on financial transactions, and from the top 1 percent of earners, who would lose billions of dollars in lucrative tax breaks.

Eat the Rich! Sounds good, let's pass that and make it work, the end.

Oh, except of course there's the trivial detail that Republicans own Congress, so this proposal is really more like one of those nifty concept cars from the Detroit Auto Show: It looks pretty flashy and some of the features may make it into a production vehicle someday, but you're not going to be seeing it in your dealer's showroom anytime soon. Still, maybe it'll be more of a 2006 Camaro concept than a Lincoln Futura (which became the Batmobile). What we are saying is that we really like cars a lot. And also we like progressive policy proposals, which Van Hollen is actually serious about, at least as a design concept for the 2016 elections:

“This is a plan to help tackle the challenge of our times,” Van Hollen said, previewing a Monday speech at the Center for American Progress. “We want a growing economy that works for all Americans, not just the wealthy few.”

The proposal has gotten a thumbs-up from Nancy Pelosi, and Van Hollen says that administration officials were also "receptive" to the idea. And of course, Paul Ryan already hates it, which is enough for us to say it deserves our support. A spokesman for Ryan, Brendan Buck, dismissed it, saying, "Just as the sun rises in the east, Washington Democrats propose another massive tax increase," which means of course that a massive tax reduction for the wrong people is not welcome if it has to be paid for by a pittance from the richest. Obviously, the smart money is on the innovative Republican strategy of cutting taxes a lot more at the top, so everyone will get a tax cut when they become rich.

Some of the specifics sound terrific, and who knows, maybe after a couple years of the GOP clownshow in Congress, they could get traction:

To spur employers to increase pay, the plan would target corporations, prohibiting companies from deducting executive performance bonuses in excess of $1 million, a benefit worth $66 billion from 2007 to 2010. To claim the deduction, companies would have to demonstrate that workers had shared in the company’s good fortunes by increasing wages about 4 percent, on par with inflation and productivity growth.

Wow, so if everybody does well, the guys at the top get a tax cut? There's a kind of jiu-jitsu logic there: Give the CEOs a reward for achieving a progressive goal.

Ah, but then there's the communistical strategy to pay for the plan. It would be covered by limiting tax breaks for the 1 percent, and by imposing a .1 percent fee on all stock trades, which would no doubt bring the economy screeching to a halt. Also, just consider what a huge re-ordering of the national economy this would involve:

All told, the package is about a third of the size of tax cuts enacted under President George W. Bush. It would transfer about 0.6 percent of national income, or gross domestic product, from millionaires and Wall Street traders to about 150 million American workers, with the paycheck bonus alone reaching at least 100 million workers.

“We believe our economy grows faster when all paychecks are rising,” Van Hollen said. The plan, he said, “would put meat on the bones” of promises Democrats have been making to voters for a long time.

Since being Mary Landrieu style corporate shills didn't work in November, so maybe the party is listening to Liz Warren and getting back to its roots. Or maybe this is the kind of base-reinvigoration effort that both parties do after a midterm whooping. Either way we like it, and would love to see Democrats actually take this and run on it. Considering the hard work Wall Street has put into shifting wealth from the middle to the top since the Reagan administration, we're pretty sure a proposal to transfer just over a half of one percent of their wealth downward will be greeted as the second coming of the Bolshevik revolution, of course.

Not that we'd have a problem with that, comrade.