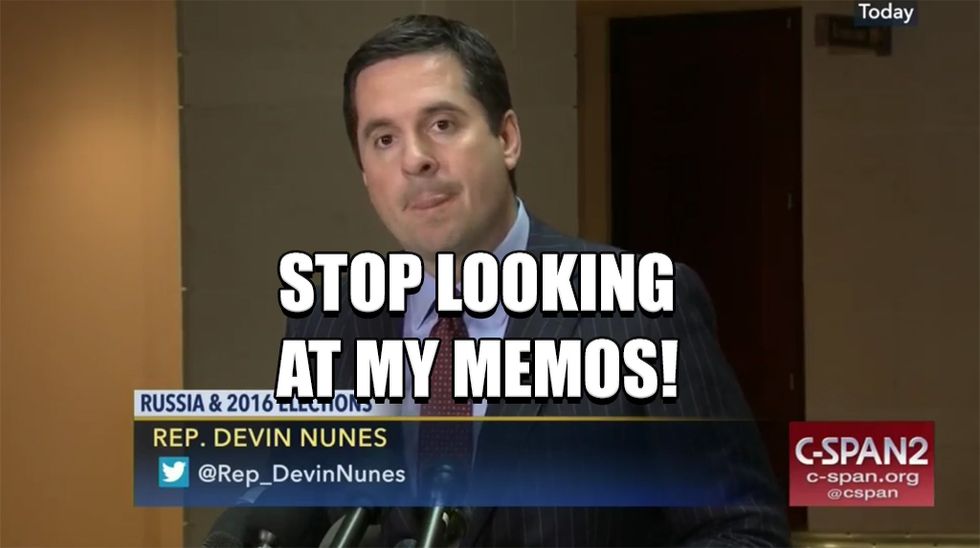 The Not Russian fiancée of George Papadopoulos says that her boo will be the John Dean of Trump-Russia. Just think, we still don't even have pee hooker tape, let alone Trump's taxes!

Congress voted to end the shutdown, and the bill was signed by Trump, extending government funding through Feb. 8, after Mitch McConnell "promised" to entertain DACA dreams.

Progressives and liberals are pissed at Chuck Schumer after he agreed to accept McConnell's pledge, prompting Schumer to ask if they had any better ideas.

Believe it or not, Republicans are more to blame for the Shithole Shutdown than anyone after McConnell and the White House repeatedly refused to even talk to Democrats in the moments leading up to the vote, prompting Trump to call McConnell "a good negotiator."

One of the reasons Senate Democrats were loathe to accept the CR was they contained MORE super rich tax-cuts aimed at kneecapping Obamacare, and conveniently giving Republicans a phony talking point to entice olds just before midterms.

Just before the Senate voted on the CR, Republicans and the Trump administration tried to slip in a provision that would remove transparency regulations on intelligence agencies, potentially allowing administrations and intel agencies -- who're we kidding, it's all for Erik Prince -- to conduct their own secret wars for funsies. It was shot down at the zero hour.

During the Senate CR negotiations, Susan Collins made everyone use a "talking stick" until it was "forcefully delivered" and broke a glass shelf.

In an apparent attempt to punish China, Trump has slapped tariffs on washing machines and solar panels. So that's terrific.

Trump's voter fraud commission was so concerned about Mexicans that it bought data that specifically ID'd people with Mexican-sounding last names, completely skipping people with names like "Burrito Jones."

Interior Secretary and grifty bastard Ryan Zinke approved of a road through an Alaskan wildlife refuge, but he promises that it'll only be used in the event of big oil emergencies.

An ethics watchdog has filed complaints and is calling for an investigation into Trump's Stormy affair, because that right there is some crooked shit.

After hearing that Trump ALLEGEDLY bought $130,000 worth of silence in his Stormy affair, Mike Pence called it "baseless allegations" while the Family Research Council's Jesus freak-in-chief Tony Perkins noted, "We kind of gave him—‘All right, you get a mulligan. You get a do-over here," as Trump isn't a godless heathen like Obama.

Maryland Democrats have another reason to ignore Chelsea Manning after she attended an "alt-right" party hosted by Mike Cernovich that included Lucian Wintrich, Gavin McInnes, and James O’Keefe.

The Pennsylvania Supreme Court has scrapped the state's gerrymandered congressional map, telling legislators to shut up and redraw the map within three weeks or the court will do it for them. Experts say the case is unlikely to go to SCOTUS, and that it may be a win for Democrats.

A federal jury found that former sheriff David Clarke didn't violate a man's free speech for detaining him when he shook his head at him. So that's good then.

UK regulators have decided Rupert Murdoch's plan to merge Sky and Fox are not in the public interest.

Puerto Rico wants to privatize its electrical utility in order to pay off some of its massive and unsustainable debt.

A commitment by Comcast to follow net neutrality expired, and now they're challenging the last rules holding them back.

Montana just became the first state to force net neutrality, with Gov. Bullock issuing an executive order telling butthurt telecoms, "If you want to do business with Montana, there are standards on net neutrality you will have to follow."

A new bill introduced by CA Rep. Anna Eshoo would block laws that ban cities and towns from building their own Internet infrastructure to compete with the big bullies at Comcast and Verizon (AKA, municipal broadband).

Since Trump's corporate-sponsored FCC refuses to investigate mass fuckery on its comment system, some nerds crunched the numbers and found that only 17.4 percent of comments were real, and they overwhelmingly supported net neutrality.

ICYMI: Here's how a web security company went from protecting the Turkish sex trade and Eurovision to punching Nazis off the Internet for being "truly awful human beings in the world."

And here's your late night wrap-up! Stephen Colbert talked about the shithole shutdown; Jimmy Kimmel chatted with a White House spokespuppet; Seth Meyers took A Closer Look at the Women's March; The Daily Show wondered what Trump would sound like if he were an Egh-Rab; and Jordan Klepper explained Trump's super secret second shutdown.

And here's your morning Nice Time! Cheetahs and puppers! Yes!

You hate ads, we hate ads, give us money or else we'll give you ads.