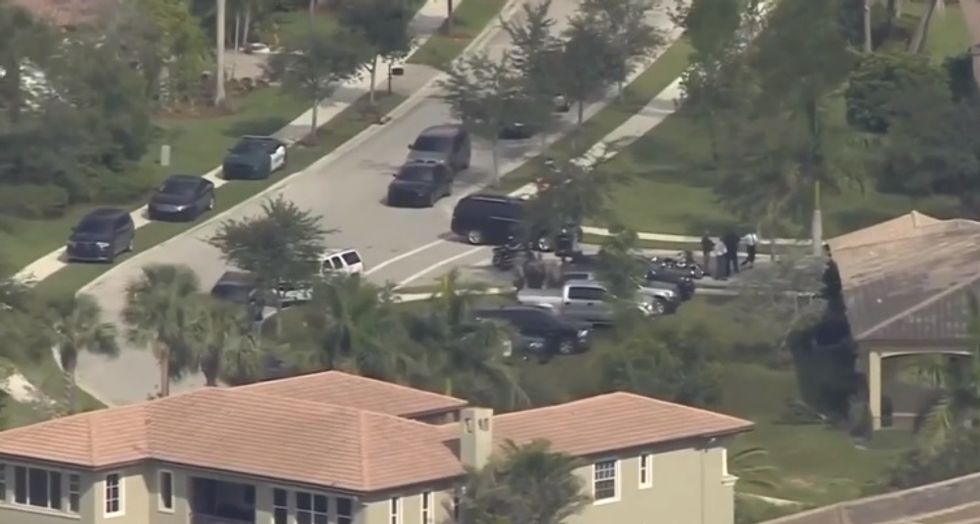 Usage tip: Hogg Swatted is very different from Hornswoggled, although both involve deception.

Teen activist David Hogg, one of the Marjory Stoneman Douglas High School students leading the "Never Again" movement to bring some sanity to US gun laws, was targeted by some idiot who far prefers insanity. An unknown person called Broward County Sheriff's Office this morning to report an armed break-in and hostage situation at David Hogg's family's home in Parkland, Florida, and a SWAT team responded. Video from local TV station WPLG included audio of 911 dispatchers discussing the possibility the call was an attempted "swatting" -- a deliberate attempt to file a false crime report in hopes that police might show up and intimidate or shoot someone. Sheriff's deputies entered the Hogg home, where, fortunately, nobody was home -- David Hogg and his mother were in Washington DC, where the teen gun-grabber was attending a ceremony to receive the Robert F. Kennedy Human Rights award, because liberals think mass slaughter is a bad thing and not just an acceptable price for freedom.

Nobody was hurt in this attempted swatting, but there has been at least one fatal example of the extremely dangerous "prank" that has grown in popularity with sociopathic behavior on the internet: Last December, a Kansas man was shot dead by trigger-happy SWAT cops after a random creep in California gave them his address during a heated argument about a "Call of Duty" video game. The man who was killed, 28-year-old Andrew Finch, had nothing at all to do with the game, but somebody in the argument posted his address, apparently picked at random, online, so he ended up dead. The 25-year-old in California who called in the fake 911 report, Tyler Raj Barriss, 25, didn't even seem to understand he'd done a bad thing, because after all, he never shot anyone. Barriss was charged in January with "involuntary manslaughter, giving false alarm, and interfering with law enforcement" (Finch's family has also sued the city of Wichita and the officers involved in the shooting). While those charges were pending, Barriss managed to get himself a federal indictment for calling in false bomb threats to the FCC during its vote on Net Neutrality, also in December. Barriss claims to have swatted over 100 people, because he is just that edgy a fellow.

Fortunately, rightwing "newspaper" the Washington Examiner played the Hogg story with all the seriousness it deserved, because he is a bad person who wants to take your guns:

Why take it too seriously, after all? It's only playing around and sending armed officers into a situation in which they're primed to use deadly force.

Gateway Pundit: Are Parkland High Kids AGENTS OF THE DEEP STATE? He Is Just Libeling!

Attacking survivors of a mass shooting might be a new low if Alex Jones hadn't already made it a business model.

Surprisingly, the Gateway Pundit, which helped spread fake reports that David Hogg was a crisis actor whose father, a retired FBI agent, was somehow involved in staging the Stoneman Douglass massacre, because the FBI hates Donald Trump, hasn't touched on today's swatting story yet. Probably waiting for some way of blaming it on liberals.

As Vox notes, there aren't any good solutions to end swatting, although it couldn't hurt if press outlets at least treated them seriously. The piece also notes that as swatting incidents have increased in California,

several California police agencies told the AP they’re taking more steps to gauge which 911 calls are real and holding back a bit before deploying their full resources, like a SWAT team.

If any good comes out of swatting, it could be these types of changes. There’s a lot of evidence that police are way too quick to deploy their militarized units. A Washington Post investigation found, for example, that police in Washington, DC, frequently raid the wrong homes on bad, little, or no evidence, terrorizing innocent people.

So there's a strange, weird silver lining, maybe: Our over-militarized police forces have become such deadly, hair-triggered weapons that trolls have found them a convenient means for committing domestic terrorism, and THAT -- not the hundreds of people shot annually by trigger-happy cops -- may finally help rein in the excesses of our over-militarized police who can be summoned with a phone call. At least until Donald Trump starts preemptively pardoning cops who kill unarmed black men.

Wonkette is ad-free and loves you.