Did James Comey Screw Hillary Because Of A Dumb Russian Spam Email? WHOA IF TRUE! 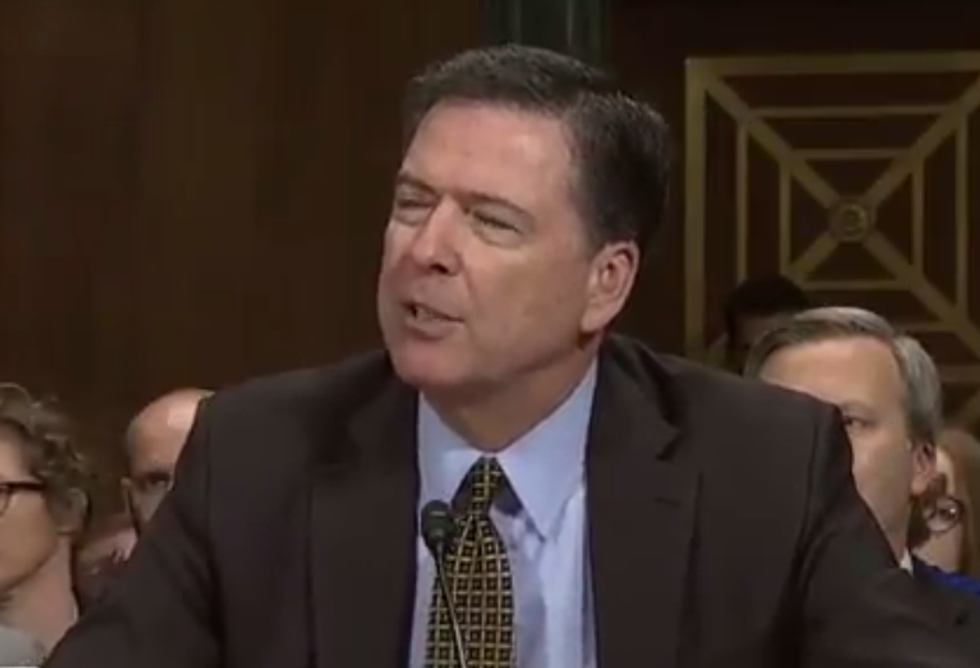 Has your weird boyfriend James Comey, who sometimes does bad things and sometimes does good things, but whom we think is GENERALLY a good guy trying to do the right thing, been caught being a total D-U-M again? Well, PERHAPS!

We've long suspected the Russian operation to influence the 2016 election was far more vast than us common folk really understand at this point, and in that spirit, the Washington Post has broken a very weird story that shows a new, exciting point of entry for Vladimir Putin and his band of merry thugs.

Back in 2016, during the primaries, the FBI received a document that came from Russian intelligence, that said dirty Democrats like then-Attorney General Loretta Lynch and DNC Chair Debbie Wasserman Schultz and other rando low-level folks were CONSPIRING to make sure the Hillary Clinton email investigation didn't go anywhere. The thing the FBI got, either in a candygram or a certified letter -- or maybe directly from the Trump campaign or one of its Russian buddies, then laundered by Rudy Giuliani or Erik Prince through the rogue New York FBI field office, we don't know, we are just spitballing -- was a description of an alleged email that allegedly said the following:

The document, obtained by the FBI, was a piece of purported analysis by Russian intelligence ... It referred to an email supposedly written by the then-chair of the Democratic National Committee, Rep. Debbie Wasserman Schultz (D-Fla.), and sent to Leonard Benardo, an official with the Open Society Foundations, an organization founded by billionaire George Soros and dedicated to promoting democracy.

In the supposed email, Wasserman Schultz claimed Lynch had been in private communication with a senior Clinton campaign staffer named Amanda Renteria during the campaign. The document indicated Lynch had told Renteria that she would not let the FBI investigation into Clinton go too far, according to people familiar with it.

When the WaPo reached out, both Wasserman Schultz and Benardo were like "I don't know her." Meanwhile, Lynch and Renteria were like "WHO?" In short, this supposed email is FAKE NEWS and Russian disinformation.

And lots of people in the bureau knew this! The WaPo reports that "[a]ccording to the FBI’s own assessment, the document was bad intelligence — and according to people familiar with its contents, possibly even a fake sent to confuse the bureau."

A FAKE, YOU SAY? Check this out:

[Some WaPo sources] recognized the dim outlines of a conspiracy theory that would be less surprising in Russia, where Soros — the founder of the organization Benardo works for — and Clinton are both regarded as political enemies of the Kremlin.

“The idea that Russians would tell a story in which the Clinton campaign, Soros and even an Obama administration official are connected — that Russians might tell such a story, that is not at all surprising,” said Matt Rojansky, a Russia expert and director of the Kennan Institute at the Wilson Center. “Because that is part of the Kremlin worldview.”

And yet this Russian document about a fake email was a key part of James Comey's decisions on how to handle the Hillary Clinton email investigation!

Last summer, Comey took it upon himself to do a big press conference, where he reported that the FBI wouldn't be recommending charges against Hillary Clinton, because "no reasonable prosecutor" would do something like that. He then proceeded to pontificate on why Hillary is nonetheless still the Pol Pot of emails. At the time he said he had to do that because of the Bad Optics of Loretta Lynch and Bill Clinton hanging out on the tarmac at the Phoenix airport and talking about their grandkids. Apparently the existence of this Fake News Russian dezinformatsiya (disinformation) also for some reason played a part in why Comey had to announce that he, the Good Clean Guy (unlike dirty Loretta Wasserman Clinton Benghazi), did not believe Hillary should be LOCK HER UP!-ed for her email crimes.

Is it because James Comey is a dumb who believes whatever dumb Russian lies Russians tell him? Or could it be something else?

The WaPo reports that some "senior officials" thought the document was important, whereas others knew it was bullshit. Is it possible the "senior officials" who believed in it like the Tooth Fairy were Rudy Giuliani-loving morons who hated Hillary? Was Comey pretty sure that if he didn't do the press conference, this thing would magically leak out and all of a sudden the news would be that evil Democratics were conspiring with Lynch to prevent Hillary from being executed for her AOL Free Trial Monstrosities?

We dunno. The WaPo notes that some "Comey defenders" they talked to still think the document is "legitimate" and might have been leaked by the Russians (like maybe through Wikileaks!), regardless of whether the things the document describes are true. Others in the bureau are like PFFFFFFT, they knew this thing was bullshit and they need to zip their traps.

We still believe that our current running theory of James Comey is correct, and that he's a smart guy, and we'd hate to think he was dumb enough to get taken in by this stupid Russian disinformation. Maybe he is! Or maybe he was simply backed into a corner.

But boy howdy, did you catch the part of this story where the Russians were throwing anti-Hillary propaganda DIRECTLY INTO THE FBI during the primaries? It's almost like they wanted to convince Trump fans AND ALSO TOO Bernie fans that the whole process was #RIGGED by the Deep State Powers That Be Establishment, and further solidify in their minds that Hillary Clinton is a criming crimer who gets away with crimes. They wanted this document leaked.

"But her emails!" indeed!