Did Jared Kushner Do Cyber Stuff With Russia? Maybe! 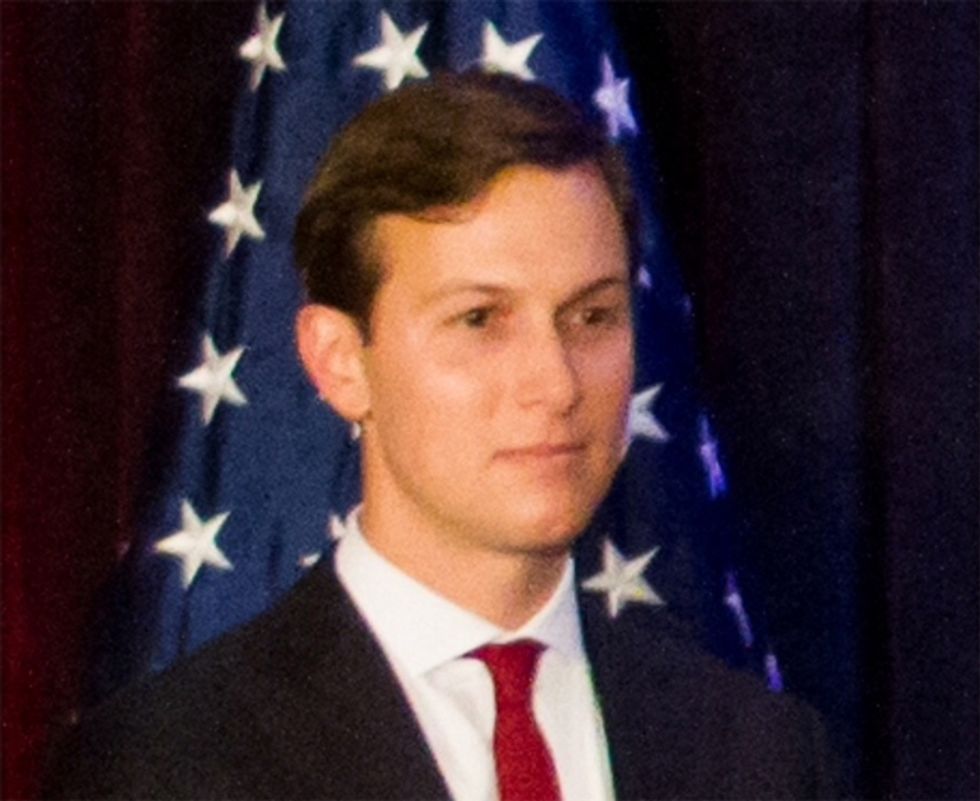 This is from his Russian Wikipedia page.For reals.

The digital wing of the Trump campaign is being scrutinized by investigators to see whether it helped Russia's propaganda operations during the 2016 elections, according to a story by McClatchy's DC Bureau published Wednesday. If there turns out to be anything to it, it could be far bigger than Donald Jr. talking to a Russian Lawyer lady about adopting some Russian babies, maybe:

Congressional and Justice Department investigators are focusing on whether Trump’s campaign pointed Russian cyber operatives to certain voting jurisdictions in key states – areas where Trump’s digital team and Republican operatives were spotting unexpected weakness in voter support for Hillary Clinton, according to several people familiar with the parallel inquiries.

The Russian propaganda effort directed both human commenters and internet bots to spread pro-Trump or anti-Clinton stories -- often fake news like the impending total collapse of Hillary's internal organs, or the #Pizzagate nonsense -- on Twitter and Facebook, and some investigators believe they specifically targeted voters in very close states, even down to particular congressional districts or voting precincts. Also, McClatchy reporters Peter Stone and Greg Gordon note that the Russian trolling effort was active against Trump's primary opponents, and in May 2016, as Trump was sewing up the Republican nomination,

That pushes back the timeline for Russian attempts to push Trump and damage Clinton to at least May of last year, before Don Jr. got that email offering him some yummy dirt on Clinton, courtesy of the Russian government.

The investigators are also looking at whether WikiLeaks had U.S.-based help in coordinating the release of particular chunks of pirated emails in response to developments in the U.S. presidential campaign. California Rep. Adam Schiff, Wonkette's sexy nerd boyfriend who's the ranking member on the House Intelligence Committee, says

[wonkbar]<a href="http://www.wonkette.com/609920/intelligence-experts-agree-russia-5-to-10-years-behind-in-meme-technology"></a>[/wonkbar]One of McClatchy's sources said Justice Department investigators think it's unlikely the Russians running the bot and troll networks would have had enough familiarity with trends in the American election to have "known ... which high-impact states and districts in those states" to target. This seems entirely possible, given the demonstrably inferior efforts of Russian diplomats at doing memes. The sources spoke on the condition of anonymity, which by Donald Trump's criteria means Stone and Gordon completely made the whole thing up.

Or maybe not, since Adam Schiff also says he wants his committee to determine whether any Trump campaign aides guided Russian deployments of fake news and leaked documents, and whether there was “any exchange of information, any financial support funneled to organizations that were doing this kind of work.”

Jared Kushner was at least nominally the head of the Trump campaign's digital media efforts. In 2015, he hired Brad Parscale, who ran much of the campaign's actual digital operations from Texas. Parscale, who collected boatloads of money from the campaign, is expected to testify for at least one of the several congressional committees investigating the election and Russia.

As of yet, nobody's saying there's a direct link between the Trump digital operation and Russian online propaganda/dirty tricks, but the Russians' seeming ability to target trolls and bots where and when they'd be helpful has raised some eyebrows:

Mike Carpenter, who in January left a senior Pentagon post where he worked on Russia matters, also has suspicions about collaboration between the campaign and Russia’s cyber operatives.

“There appears to have been significant cooperation between Russia’s online propaganda machine and individuals in the United States who were knowledgeable about where to target the disinformation,” he said, without naming any American suspects.

The same goes for Congressional investigators, like Democratic Senator Mark Warner, vice chair of the Senate Intelligence Committee. In a May interview with Pod Save America, Warner said,

"I get the fact that the Russian intel services could figure out how to manipulate and use the bots [...] Whether they could know how to target states and levels of voters that the Democrats weren’t even aware (of) really raises some questions … How did they know to go to that level of detail in those kinds of jurisdictions?”

The Russians appear to have targeted women and African-Americans in two of the three decisive states, Wisconsin and Michigan, “where the Democrats were too brain dead to realize those states were even in play,” Warner said.

Twitter’s and Facebook’s search engines in those states were overwhelmed, he said, meaning they couldn’t discern fake news from real news.

Go listen to the whole podcast, it's really some great political geek stuff.

So did Russian disinformation matter in the election outcome? We keep hearing the Russians didn't actually hack vote results, but the possible effects of their targeted troll and bot efforts is harder to measure. As Stone and Gordon note, the margins of Trump's electoral vote victory in three pivotal states, while HISTORICALLY HUGE, was narrow enough that if the Russians influenced a few thousand voters, it may have made a difference:

We're not saying the Russian disinformation effort threw the election. But it certainly looks like they were suspiciously good at sending out fake news where and when it could do maximum damage, and that Donald "She doesn't have the stamina to be president" Trump was awfully receptive to making use of that propaganda as well. Gosh, maybe someday we'll find out what was really going on. Until then, we'll just go with the assumption Hillary was being mind-controlled by Ukrainian operatives.

Yr Wonkette is supported by reader donations. Please click the "Donate" linky to help! The Russian bots are really not pulling their weight when it comes to donations.