Did Michelle Wolf Call Sarah Huckabee Sanders A 'Debased Redneck Motherfucker' Or Something? 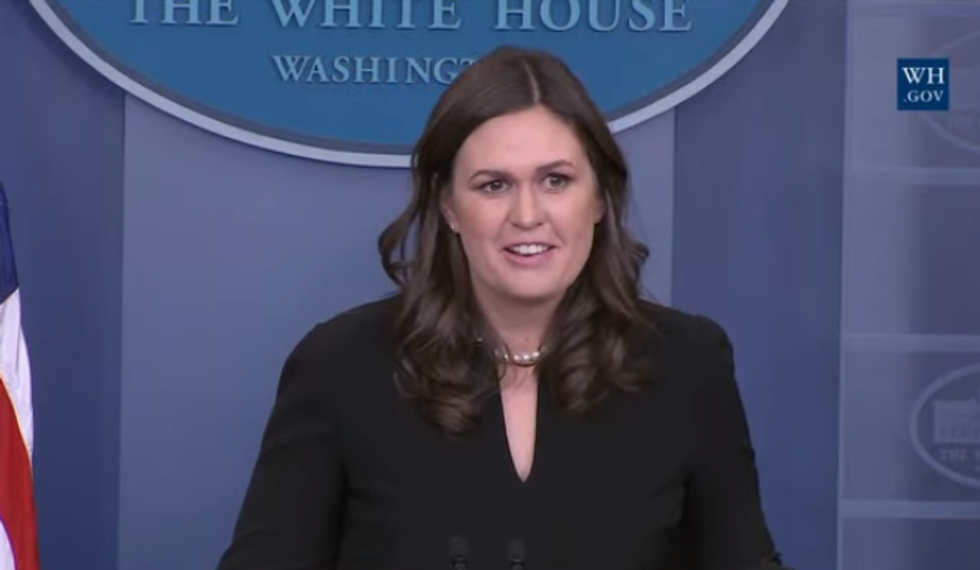 DO NOT MENTION HER SMOKY EYES

Oh, the pearls being clutched on behalf of Sarah Huckabee Sanders right now! Oh, the noble denizens of the Beltway coming forward to prove they can transcend political lines to stand up for every human's God-given right to never have her eye shadow referred to as "smoky," because everybody knows it's sexist to make jokes about a person's constant lying by referencing makeup. Oh, the "Morning Joe" hosts who are actually mad somebody made a really funny joke about how their own relationship is kind of like a "#MeToo that worked out," therefore they are imprinting their rage about that onto the Sarah Huckabee Sanders thing. It's almost like some of these people are so highly protective because Sanders is one of their most prized sources, the person who is "according to a senior White House official" more than any other. (Is that it, Maggie Haberman? Does Sanders just LIE LIE LIE LIE LIE from the podium and then immediately start whispering in White House Press Corps journalists' ears about what's really going on?)

Hey mags! All these jokes were about her despicable behavior. Sounds like you have some thoughts about her looks though? 😘 https://t.co/JRzzvhBuey

Oh, Matt and Mercy Schlapp, DC Republican power couple joined in the bonds of holy matrimonial conservative snowflake victimhood, loudly walking out of the White House Correspondents Dinner in a public show of "we're oppressed and we're not gonna take it anymore!" In fact they were so oppressed they went out and stood in the lobby for a little while, or maybe they went and got a cocktail at a regular American watering hole, before showing up at the NBC/MSNBC after-party, to schmooze. Today, they are on every TV network, he the president of the American Conservative Union and she the White House comms director, licking their wounds and saying it's NOT FAIR for journalists -- or comedians, we guess -- to call liars liars, because it will hurt reg'lar Americans' feelings.

With this kind of backlash, you'd think Michelle Wolf had called Sarah Huckabee Sanders a "debased redneck motherfucker" or something. But nah, Wonkette did that. After a week where she was just awful and dishonest even more intensely than usual, Sanders responded to Donald Trump tweeting fake Muslim torture porn videos by saying "the threat is real," and that the president is just trying to let us know about the scary bad Muslims, even if his tweets were literally all fake. We went hard at her because what she said was foul and disgusting and terrible, even for her. So naturally, in return, we got emails from debased redneck motherfuckers all across America threatening to kill our dog, which is weird because A) our dog? Really? Isn't that Sanders's brother's job? and B) we didn't even say anything about the press secretary's eye shadow choices.

We're pretty sure those emailers weren't defending Sanders in order to preserve their access to "according to a senior White House official." It's almost as if there's something else going on here, a difference between why the Andrea Mitchells of the world are going all in for that asshole and why "regular Americans" like the Schlapps are doing so. When we became the distraction du jour for Breitbart and The Daily Caller over our comments about Sanders, we theorized that part of it is that we, a City Southern, went after Sanders, who'd really like you to believe she is a simple Country Southern, but is actually part of a powerful GOP political family, as a "redneck." And indeed, much of the weeping and gnashing of teeth right now is of the "MEAN COASTAL ELITES RIPPIN' ON POOR SARAH, CHAMPION OF THE COMMON PEOPLE" genre.

We think part of it, then as now, is that conservatives have a collectively shitty sense of humor, don't really understand jokes in the first place, don't know what "sexism" is, and just in general are pretty stupid people. (And are also intellectually dishonest.) When Wonkette yelled at Sarah Huckabee Sanders without mentioning anything gendered even once, we were called "sexist." When Michelle Wolf goes after Sarah Huckabee Sanders for her constant lying, and creatively turns it into a joke about her "smoky eye," or makes a joke about how Sanders, in her role as White House spokes-liar, reminds her of Aunt Lydia, it is an ATTACK ON ALL WOMEN. Or at least, an attack on conservative women, because there is a DOUBLE STANDERT! where conservative women aren't allowed to be as racist and dishonest as a common Donald Trump without having mean liberals call them lying assholes for it. The world is truly unfair.

Thank goodness there are funny conservative comedians out there, to provide zingers from the other side of the political aisle:

What a horrid human being Michelle Wolf is. I’m going to read up on her over the next couple of days and I will have a few brutally mean jokes about her by Wednesday.

OK, they will provide zingers by Wednesday at the very latest. Got some very important bellyaching and crying to do before then.

Or maybe Steve Schmidt is on to something here:

The one thing no autocrat can tolerate, and this is especially true of our dime store Mussolini and his factotum, is to be Laughed at. Nothing cuts deeper than truth that pierces the lies and pretensions with laughter. Autocrats and their followers are always victims. Ask them.

Oh yes, he's on to something. What all these conservative whiners were confronted with at the White House Correspondents Dinner, up close and personal, is the reality that, even if they barely and with Outside Help eked out a "victory" in this past election, they still don't have the culture, and they never will, and they cannot stand that the majority of Americans see right through their hypocritical bullshit. (No smoky eyes clouding their vision!)

And the Maggie Habermans and Chris Cillizzas and Morning Joes of the world? They're not pissed about the Sanders jokes, they're pissed because they got dunked on Saturday night too.

They'll live through it.