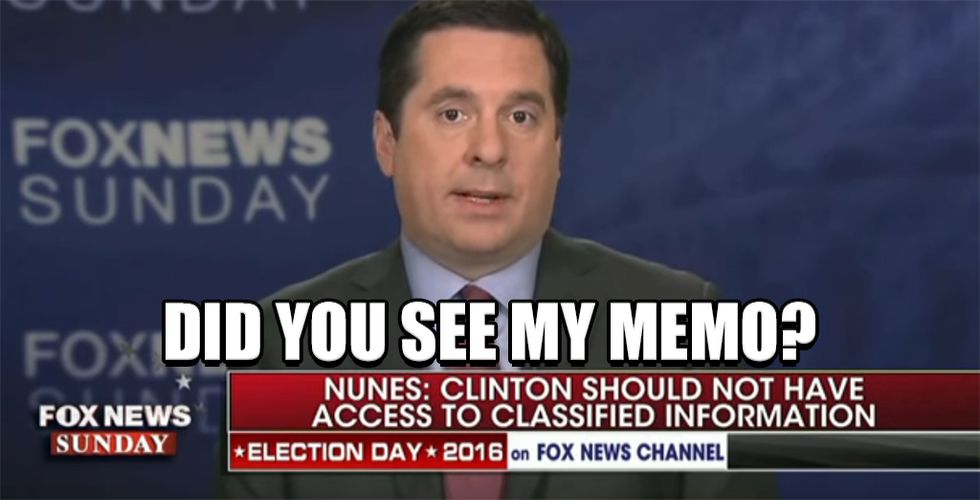 The House Intelligence Committee voted to release THE MEMO that Devin Nunes's staff wrote to throw shade and shit all over the FBI and intel agencies for investigating Trump-Russia fuckery during the 2016 election. [Morning Maddow]

The White House says we don't need to implement those mean Russian sanctions Congress passed last year in retaliation for a wide-ranging, multi-state cyber attack on our election system, since we already have sanctions from that time Russia denied invading Ukraine.

Instead of sanctions, the Trump administration is slutshaming Russians by finally releasing a list of Russian oligarchs and politicians who owe their fabulous lives to Vladimir Putin. (It's all of them. That's how it works.)

During tonight's State of the Union address, Trump will flash the names of donors across the screen of a livestream on his campaign website, but not projected on the well of the House behind him, they're saving that for next year.

The Muslim Bantravel restrictions on refugees from 11 Muslim majority countries has lifted after a 90-day security review found we only need X-TREME vetting on brown people Not American poors.

The SOTU is expected to focus on the economy, and see Trump bragging about his super-rich tax cuts, but his plans to dump trillions into the military and mysterious infrastructure projects are already drawing bipartisan skepticism from Congress.

Democratic and progressive groups are getting ready to fire salvos at grifty Trump officials, like Jared Kushner and Elaine Chao, who have already been engaging in shady public-private business deals expected to be announced during the SOTU.

The FEC is getting ready to lay the smackdown on social media ads that promote political candidates. It'll be interesting who Zuckerberg tries to blame this time.

The Koch Brothers are getting ready to drop $400 million in ads for Republican Congressional candidates, and that's aside from the big donors with open checkbooks already shoveling cash for ads on TV, the web, and mail boxes. Don't be surprised when racist olds start tweeting about Her Emails and chemtrails.

The rumor mill on the Hill is that central casting is sending David Bowdich to replace Andrew McCabe as Deputy Director of the FBI. Bowdich is a former SWAT sniper who specialized in combating non-white collar crimes and terrorism in the Los Angeles area.

Andrew Gellert has been tapped to be the US ambassador to Chile, and it just so happens that he's a VERY good friend and business associate of Jared Kushner's jailbird daddy. How convenient.

In the wake of a series of terrorist attacks in Afghanistan, the Pentagon is suddenly clamming up about war data, presumably because it makes Donald Trump look like a big, fat, international loser.

Somebody leaked a report that concludes Brexit will leave the UK completely fucked, no matter what Theresa May does. This morning MPs are demanding an official release of the document, but there's no actual system in place for Parliament to release the report.

Early this morning an appeals court ruled that the UK's mass surveillance laws were illegal. Known as the "snooper's charter," the court found it was too easy for police and public officials to concoct random reasons to investigate phone and digital records.

Sean Hannity was glitched off Twitter over the weekend, so one young woman did what anyone would -- create a fake Twitter handle and wait for Julian Assange to start bragging about dirt on Sen. Mark Warner.

The Trump administration wants to nationalize the expansion of 5g wireless, which is being hailed as a blessed curse from skeptical techies and infrastructure wonks who would love a new network in less grifty hands.

Verizon and Apple still think it should be illegal for you to tinker with your own gadgets and gizmos, so they're doubling down on "right to repair" laws.

And here's your morning Nice Time! It's a rare Galápagos tortoise hatchling!

Give us money and we'll give you cute critters with newses and 'splainers. WE SUPER SWEAR!