Didn't You Get The Memo, Park Police? Louie Gohmert Can Park Anydamn Place He Pleases! 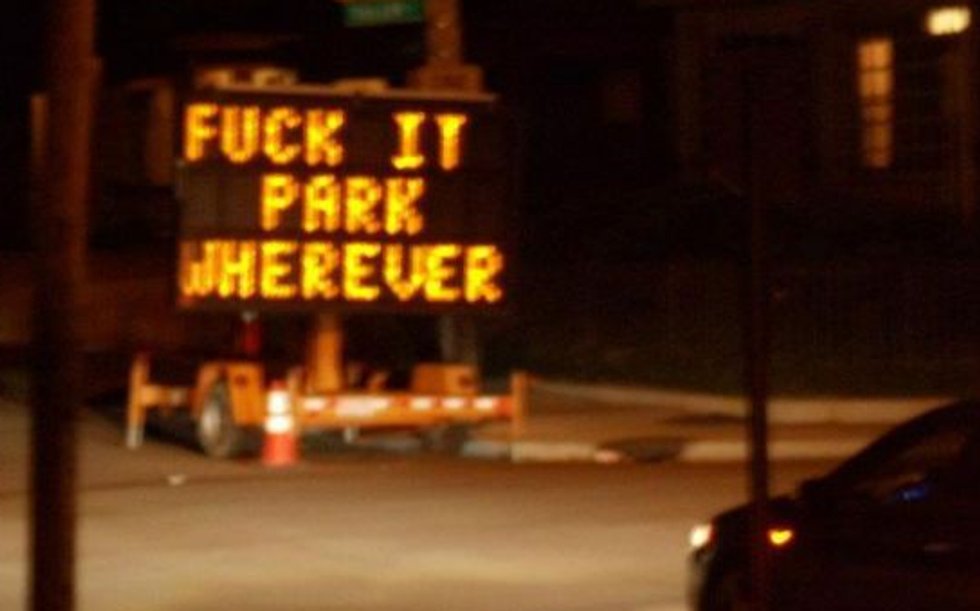 Solar-powered sex machine (BECAUSE HE IS BALD) Texas congressman Louie Gohmert got into a bit of a foofaraw (or perhaps it was arhubarb, or a snit) with some U.S. Park Police earlier this month when he attempted (successfully? Politico does not tell us the final outcome of this thing?) to weasel out of a parking ticket. Let us see what sorts of ego-strokery and competing demands to respect mah authoriteh went down!

Gohmert was ticketed around 11 PM on March 13 for parking his black Ford SUV in a spot reserved for National Park Service vehicles near the Lincoln Memorial, where he absolutely was NOT cruising for gay sex, why would anyone even think that? The congresscreep was totally on "official business" and he had his Congressional parking permit on his dashboard, so that makes him King Shit of Parking, you hear? Gohmert

told the Park Police that his congressional parking placard allows him to park in that spot, and he’s on the committee that oversees the agency.

Gohmert took the ticket off his windshield and placed it on a police car along with his business card with a written message: “Oversight of Park Service is my job! Natural Resources Thus the Congressional Plate in window.”

He was “rude and irate,” one officer reported. Another wrote that Gohmert was “ranting.”

“I was issued a ticket and I am a congressman and parked my vehicle in the NPS parking only because I have a Congress placard, see,” Gohmert told one officer, according to the report. “I am going to a meeting on the Hill and I am the one who oversees the National Park Services Natural Resources.”

Gohmert does NOT AT ALL sound exactly like one of those students who gets a "C-" on a paper and whines about how Daddy's taxes pay your goddamn salary, Mister Adjunct Instructor, so you better think about how you're treating me. No he does not. Louie Gohmert has important duties to Git Done, and if you piss him off he may slash your budget and maybe ground you forever, like he did to that other mouthy guy that he put on double-secret White House arrest a couple weeks back.

Politico contacted Gohmert's office for their version of the story, which is where the story turns into a veritable Rashomon of the Parking Spaces. According to communications director Kimberly Willingham,

The police report, which includes statements from three officers, makes no mention of apologizing to Gohmert or what happened to the parking violation. The Park Police did not provide an update.

Gohmert told an officer that he “did not have time to deal with the issue,” according to the report. The report says that Gohmert told officers “I left my business card with the ticket and I am not paying for a ticket” and drove off without further incident.

They just let him drive away after getting all shirty like that? No Tasers?

In any case, we honestly don't know whether Gohmert was being a total douchebag who happened to be right about his parking privileges, or a total douchebag with no justification whatever, because according to DC regulations, congresscritters actually can park “in any available curb space in the District of Columbia” when they are “on official business” and they display their Don't Ticket Me Bro, I'm In Congress" parking placard. BUT, sez Politico, "A Park Police spokesman and Capitol Hill source said a congressional plate would not allow a lawmaker to park in a reserved spot near the Lincoln Memorial."

What Your Wonkette wants to know is, when is Barack Obama going to stop with all this parking-spot fascism and let Our Children visit the White House again?