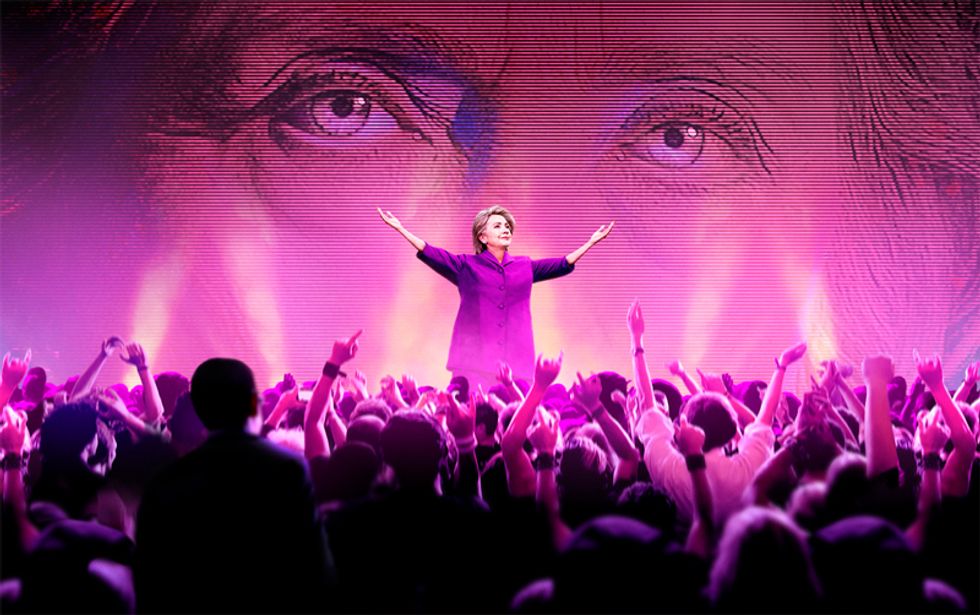 Big Sister Is Watching You

Here's what we learned by watching Dinesh D'Souza's latest "documentary," Hillary's America:The Secret History of the Democratic Party: Democrats did just about all the bad stuff in American history, and they're still doing it. As a recent Russian troll on Wonkette informed us, "Go see the new movie: 'Hillary'. It's an eye-opener. The DNC is a CRIME FAMILY against America!" The full title of the flick actually gets the main thrust of the thing backward: This is first and foremost a story about how terrible Democrats always have been and always will be, and only secondarily a movie about Hillary Clinton, who's just one more iteration -- perhaps the ultimate one -- of the party's evil agenda, which hasn't changed in literally 180 years.

The movie starts with wide-eyed Dinesh D'Souza wondering how it is that he, a simple immigrant rightwing propagandist who merely committed a felony violation of campaign finance law, could have been sent to prison for such a trivial thing. Clearly, it was Barack Obama personally getting revenge on him for making a movie exposing what a ginormous effete tyrannical fraud Obama was! “If you make a film criticizing the most powerful man in the world," D'Souza says soberly, "expect the empire to strike back." That was a clever film reference! Left out of the reeneacted courtroom scene is any mention of the minor detail that D'Souza pleaded guilty to the charges, or that he'd given $5000 each to four straw donors to fund a pal's losing Republican candidacy for the Senate. In the movie he simply says he was prosecuted for giving more money to a political campaign than allowed, a line that makes the hardened killers, con artists, and father rapers he's locked up with -- overnight only, for a soul-crushing eight months -- laugh uproariously. (The prison scenes, like everything else in the movie, are reenactments. There's very little documentation in this "documentary.") Innocent Dinesh learns all about crime schemes from another inmate, who turns him on to an idea that had clearly never occurred to D'Souza before: The biggest criminal gang of all is...THE GOVERNMENT! It makes Dinesh wonder: What if the Democrats are planning to steal America once and for all?

Deleted Comments: Democrats Did The KKK, So Wonkette's The REAL Racist

After his release from the hell of Overnight Prison, D'Souza goes to visit "Democratic Headquarters," where the telescreens all brag about Dems being the party of equality, but in a concealed basement room, the Dems keep all the dirty suppressed true history that they don't want you to know, except for how we're always doing Dear ShitFerBrains posts about it. We learn that from the party's inception under Andrew Jackson, Democrats have supported racism, slavery, lynching, segregation, white supremacy, and of course rape -- a scene of Andrew Jackson making one of his female slaves climb into bed with him is shown with D'Souza's hilarious voiceover, "What is it about Democratic politicians and vulnerable young women?" D'Souza points out that Jackson expelled the Cherokee tribe from their lands and sent them on a forced march to reservations, and solemnly says, "It was a trail of tears," as if no one had heard the phrase before. We learn the Civil War was not so much a conflict between North and South, but between noble freedom-loving Republicans and evil slavery-loving Democrats. Ever keen to add some economic preaching, he notes that not only was slavery brutal, it was theft of the slaves' own bodies and labor. You know, just like taxation. He blithely tosses off lies that are easily disproved, like "No Republicans owned slaves." Huh! Tell that to Ulysses S. Grant (who did, to his credit, free the one slave he owned in 1859).

The biggest problem with D'Souza's version of history of course, isn't the lies, but the very, very partial truths, particularly his pretense that nothing at all changed about the two parties after 1964 and the passage of the Civil Rights Act. Sure, we get a reenactment of LBJ's infamous (and dubiously sourced) line "I'll have them ni**ers voting Democratic for two hundred years." But we don't hear a word about Barry Goldwater's opposition to the Civil Rights Act -- he wasn't an overt racist, but like Rand Paul, believed the government had no business interfering in who private parties did business with. We're shown Woodrow Wilson screening Birth of a Nation at the White House -- complete with a hallucinatory ghost Klansman and horse jumping right out of the screen then out onto the White House lawn, with Wilson looking on, awestruck -- but left to assume that if there's one thing modern Democrats admire, it's those great ol' racists of the past. We like Wilson's idea for the League of Nations, but you'd have a hard time finding any modern Democrats who'd say, "Why, yes, we should bring back Woodrow Wilson's racial attitudes." At least not in public where a good decent Republican could hear us.

Yes, this actually is in the movie

Funny thing that D'Souza doesn't mention about the modern parties, though: If you hear a state legislator bloviating about how the Civil War wasn't about slavery, or that monuments to Nathan Bedford Forrest must stay in place to honor Southern Heritage, or that slaves weren't really mistreated much because it would have been irrational to whip one's property to death, chances are that idiot doesn't have a "D" after their name. Quick show of hands, Wonkers: How many of you are registered Democrats with Confederate flags (or decals of same) on your car? And why hasn't the KKK endorsed Hillary?

Needless to say, the words "Southern Strategy" are never spoken in Hillary's America, and D'Souza proclaims the very idea of the two parties having changed places "a LIE" -- with a little graphic made up of teensy pixels showing how many pro-segregation "Democratic leaders" actually switched parties. Only a few, therefore nothing changed, hooray, and in D'Souza's happy fantasy, the only reason the South eventually went Republican was that so many Southerners realized Republican policies created economic prosperity -- illustrated by a quick scene of an auto plant somewhere in the South. Non-union, of course, for prosperity. In a deleted scene that will probably make it onto the DVD, we get this succinct explanation of "which is the party of bigotry and which is the party of emancipation," in an interview with Vanderbilt professor Carol Swain:

See? Good guys all Republicans, bad guys all Democrats, and American History ended in 1964! Strange, though, D'Souza completely fails to give any credit at all to Lee Atwater, who helped run Ronald Reagan's 1984 campaign, managed George H.W. Bush's 1988 run, and chaired the Republican National Committee from 1989 to 1991. Surely a fine scholar like Dinesh D'Souza must be familiar with the great Republican strategist's 1981 interview in which he summarized the Southern Strategy and how overtly racist appeals came to be replaced by dogwhistles:

You start out in 1954 by saying, “Nigger, nigger, nigger." By 1968 you can't say “nigger" -- that hurts you, backfires. So you say stuff like, uh, forced busing, states' rights, and all that stuff, and you're getting so abstract. Now, you're talking about cutting taxes, and all these things you're talking about are totally economic things and a byproduct of them is, blacks get hurt worse than whites.… “We want to cut this," is much more abstract than even the busing thing, uh, and a hell of a lot more abstract than “Nigger, nigger."

Man must have been a secret Democrat, that's the only possible explanation. Considering all Atwater did to help consolidate Republican power in the 1980s, it seems incredible that D'Souza wouldn't have given him some credit for the achievement. (As a lapsed Catholic, we feel the need to point out Atwater's deathbed confession in which he was very very sorry for all the gross things he'd done.)

Finally, we get to the Hillary part, which feels like it's only about the last 40 minutes of the movie. It's the usual hodgepodge of crap about Hillary as a master manipulator, a power-mad disciple of the evil Saul Alinsky, bent on actually stealing America from the good people it really belongs to. What does Hillary want? Nothing less than to enslave us all on the Democratic plantation through the horrifyingly sneaky means of winning the 2016 election. We thought Barack Obama had already enslaved us, though. So maybe Hillary will enslave us even more, somehow. Oh, and also, since she enables all of Bill's philandering -- D'Souza casually explains that rape is simply something Democrats just do, you know -- Hillary actually is the real war on women. You've heard it all before, and the only original thing D'Souza adds to the usual stew of claims that the Clinton Foundation is merely a front for ripping off taxpayers and siphoning money to the Clintons in the guise of charity is his hilarious joke about Benghazi: He imagines the only reason Clinton "ignored" the frantic calls for help from the attack on the American compound -- D'Souza portrays her watching it live on multiple TV screens, then walking away -- is that "she couldn't figure out how to make a buck off of them."

Fortunately, the party of Lincoln (but not Lee Atwater, you just hush now) can still save America from Clinton's corruption and thievery just as long as it doesn't let her steal America in 2016. D'Souza reminds us that since Barack Obama made him a felon, he can't vote himself. But you good folks in the theater can, and won't you please save America from the relentless fraud and money-grubbing of Hillary? You know, by voting for the Republican candidate who brought us Trump University and a slew of other schemes (although D'Souza doesn't quite name him). Then, since apparently the movie needed another 10 minutes, we're treated to not one but three patriotic songs, plus some monuments and fireworks. You almost feel like you've saved America just by watching the movie.

Yr Wonkette would like to thank Our Girlfriend for sitting through this monstrosity with us, and for occasionally preventing us from laughing too loudly at the stupid thing. It will definitely be out on video/streaming by the end of the summer, and might make for some fine comedic viewing on election night. As for Dinesh D'Souza, we can only wonder what act of filmic brilliance he'll perpetrate next. Keep an eye on the comments at WND for a preview.