Disgraced Sheriff Joe Arpaio: Pardon Me, I'd Like To Be Senator 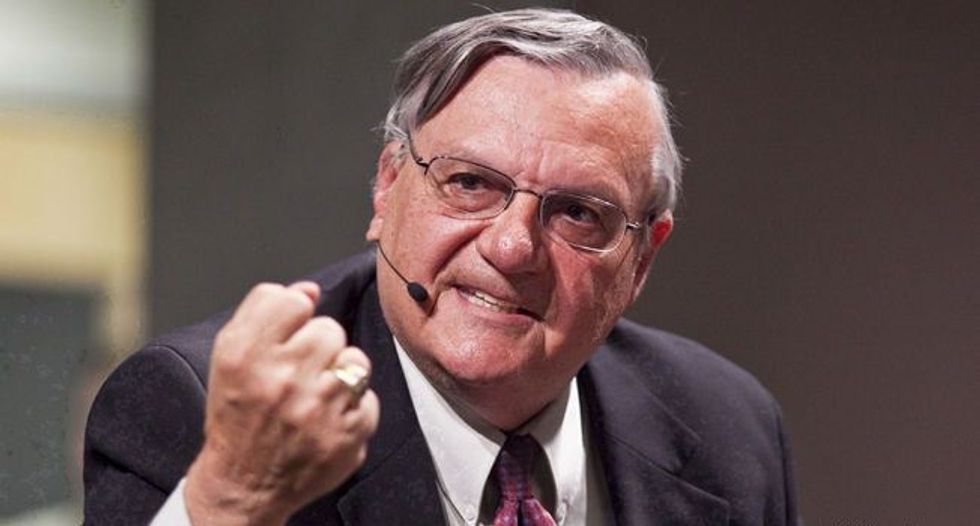 Guy needs a monocle and a Persian cat

Now that he's got a presidential pardon to brag about, former Maricopa County Sheriff Joe Arpaio is giving some thought to what's next in his life of petty revenge, self-aggrandizement, and feeding at the public trough. Hey, how about another run for office, and not just for Sheriff, but for something really big, like the U.S. Senate? After all, it's not like accepting a pardon is an admission of guilt just because the courts have treated pardons that way for over a century. It actually means an exoneration, because it just does! Heck, maybe once he's Senator Arpaio he can do something about eliminating the useless judiciary that kept getting in the way of his War on Mexicans.

Arpaio's just kicking around some options right now, since Donald Trump has conclusively proven Arpaio broke no laws by pardoning him for breaking the law:

"I'm sure getting a lot of people around the state asking me" to challenge Flake, said Arpaio, who served 24 years as sheriff before losing reelection in 2016. "All I'm saying is the door is open and we'll see what happens. I've got support. I know what support I have."

Arizona's Kelli Ward is clearly too crazy to serve in government. Obviously, she has a very good shot at becoming a U.S. Senator.

Given rightwingers' recent embrace of Trump and other weirdos like Judge Roy Moore, who's leading Alabama's run-off for the Republican primary, Arpaio may actually have a chance. After all, he's just about the only potential candidate who could possibly be loonier than Kelli Ward.

But isn't 85 a bit late in life to start seeking his first office beyond being sheriff of a rightwing county? You just shut your mouth, you... you... AGE DISCRIMINATOR!!!!

"Why do you say ‘wow'?" he admonished, adding: "They just say Sheriff Joe Arpaio comma 85 years old. Why do they always say that?"

Arpaio said he believes "there is discrimination against senior citizens, big time" and that "I'm proud to be my age. I work 14 hours a day. If anyone thinks my age is going to hold me back, I've got news for them."

"The bottom line is there's no way I'm going to go fishing. I have no hobbies," he said, declining to say how likely he is to seek office.

Sheriff Joe Arpaio Pays Out Millions For Loving Constitution Too Much, Jailing Journalists In Middle Of The Night

Or maybe he'll check with his agent and see what kind of money he can make on the rightwing lecture and ghostwritten book circuit. Man has a lot of balls, and some of them are still in the air. Plus, he still needs to find out where Barack Obama was born, get him retroactively removed from the presidency, and send him to jail. Or maybe he'll settle some scores, since abusing his power for the sake of revenge was as big a part of his career as sheriff as going after Messicans:

The ex-sheriff said he may sue journalists who have called him racist or misreported details of the case against him. He says his attorney is reviewing the possibility and that he was "surprised" by negative reaction to the pardon by Flake and Arizona Sen. John McCain.

Or maybe he'll take over the New Cruelty at ICE, finding new and creative ways to strand women and children in abandoned bus depots, during hurricanes. If anyone could top that, it's America's Tuffest Sheriff, Ol' Sheriff Joe.