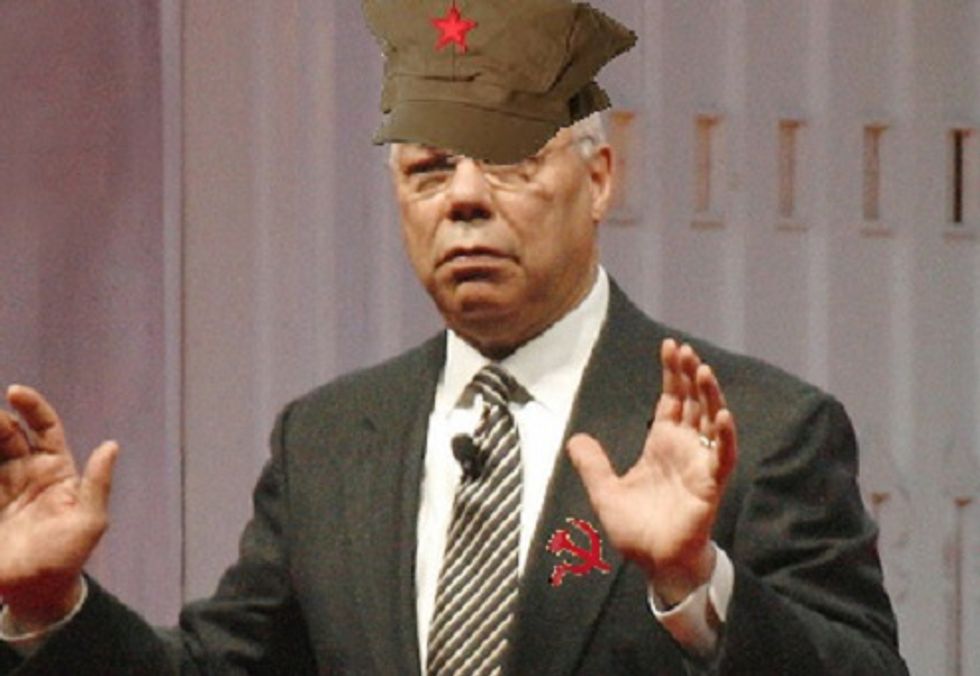 Remember when General Chairman of the Joint Chiefs of Staff Secretary of State Colin Powell was awesome (Powell Doctrine) and then he wasn't awesome (bullshit "testimony" at the United Nations about "WMD") and then he was sort of awesome (endorsing Obama) and then he becamea total dirty Nazi Marxist hippie commie from Commiestan because he said this Commie thing?

“I think universal health care is one of the things we should really be focused on, and I hope that will happen,” Powell said. “Whether it’s Obamacare, or son of Obamacare, I don’t care. As long as we get it done.”

Well, former Rep. Allen West (R-Torturer), someone who knows an awful lot about being a disgrace because he is a disgrace his own self and it takes one to know one, we guess, is none too pleased that Powell drank the ObamaHitlercare Koolaid and has become -- for the first time ever! -- a disgrace.

How is it that someone who wore the uniform of this great nation and stood on freedom’s ramparts against the enemies of liberty, communists and socialists, now embraces one of their fundamental tenets?

How indeed! What kind of a son of Obamacare who once wore The Uniform would dare support health care for all Americans when such a thing clearly flies in the face of the part of the Constitution that says health care for all Americans is BAD and WRONG and socialistical? And now Allen West has to have sads about his great hero becoming an aiding-and-abetting-er of the enemies of LibertyTM. He is most not pleased with you, Colin, and now he will have to burn his Colin Powell dolls and all of your records.

Sadly, General Colin Powell was a role model whom I once held in high regard. He has broken his oath to the Constitution, which limits government intrusion and invasion into the lives of American citizens. Therefore, I can no longer view him as the honorable man I wanted to emulate.

We hate to point out the minor technical detail that Allen West was already not able to emulate Colin Powell, on account of how he had to resign from the military for that time he did that torture to that Iraqi prisoner. But maybe Col. West also missed Powell's real point, which is that, having worn The Uniform, Powell knows exactly how effective really good government-run health care can be. The same health care that Allen West had, until he was drummed out of the Army for disgracing The Uniform.