Dissent Hasn't Forgotten About Iraq Like Some Of Us (Looking At You, Everyone In America) 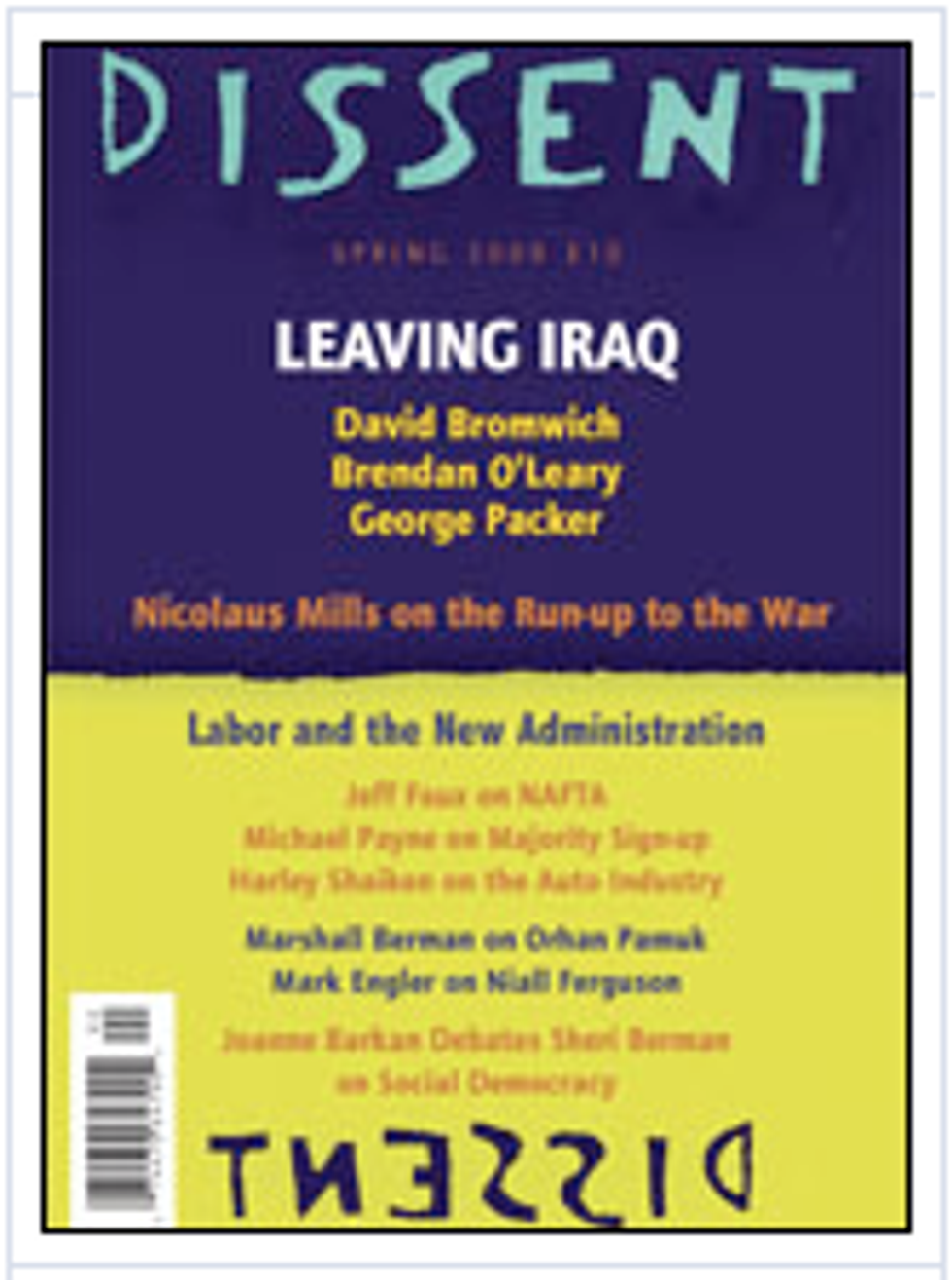 Hey and welcome to Thursday, a day for magazines! So, speaking of welcomes, remember Iraq? We were "welcomed" there in 2003 or thereabouts, right after—and because of?!—9/11. Turns out we liked it so much over there we never left. Ha ha. Well, to be fair,Dissent is still in an Iraq Of The Mind, what with their Spring 2009 Young Hollywood Iraq Package. Let's invade it!

"It Isn't Over": The New Yorker's George Packer (he is the other film critic, along with Anthony Lane) argues his titular declaration pretty well. For one, we're stuck there, at least for awhile—either sixteen or twenty-four months, depending on whether America is better friends with Obama or Petraeus, respectively. And two, we can't "win" in the, uh, non-pejorative sense of the word "win" (?) because we've already caused enough structural, political and collateral damages to sort of solidify this whole ordeal as a bad scene. That is why you never hear Petraeus, he does Army over there and elsewhere, use that word, "win." Still! When we do leave we should do so slowly, says George Packer, as to not cause even more disruption than this entire disruption of a war has already precipitated. Also, BONUS POINTS to Mr. Packer for writing an article about how the mission in Iraq is not, in fact, accomplished and not alluding to, invoking, or any other type of literary devicing "Mission Accomplished" so close to its sixth birthday. This is why they let you write the film reviews at the New Yorker magazine, sir. [It Isn't Over]

"The Persistence of Empire": David Bromwich, who holds the prestigious office of Professor of Internet Newspaper: News Blogs Video Community at Yale University, has a slightly theoried-out piece about empire and its motivations for occupying other countries. Turns out that not only is it not "selflessness" that inspires countries to occupy others, but actually no one even pretends that this is the reason, if you listen carefully. Turns out governments are orchestrating the system to be kind of double blind here, in which imperial powers know that invading another country with reckless abandon is kind of a lame thing to do and they know you know this but they also know you'll turn a blind eye anyway. Democracy!

"Departing Responsibly": Ooh, this one looks sobering! But actually it's kind of the most contrarian piece in the package (ignoring the Nicolaus Mills one which isn't online and therefore isn't a count-y one), in that it argues that not everything in Iraq is a complete disaster—like uh, the Constitution of 2005, our involvement with which essentially consisted of "letting it happen"—and also removing Saddam was overdue because sure, that's a thing you can say. In fact, that Constitution thing, the one that is a Success of the War and for which we're not even really directly responsible, is actually the best chance Iraq has of recovering from Saddam's—and later our own!—dismantling of its infrastructure. Still, we have overstayed our welcome—meta: full circle from post's preamble now—and departing responsibly involves listening to Joe Biden (an "out" Federalist) and Hillary Clinton (who loves Kurds), and doing exactly what they prescribe. [Departing Responsibly]