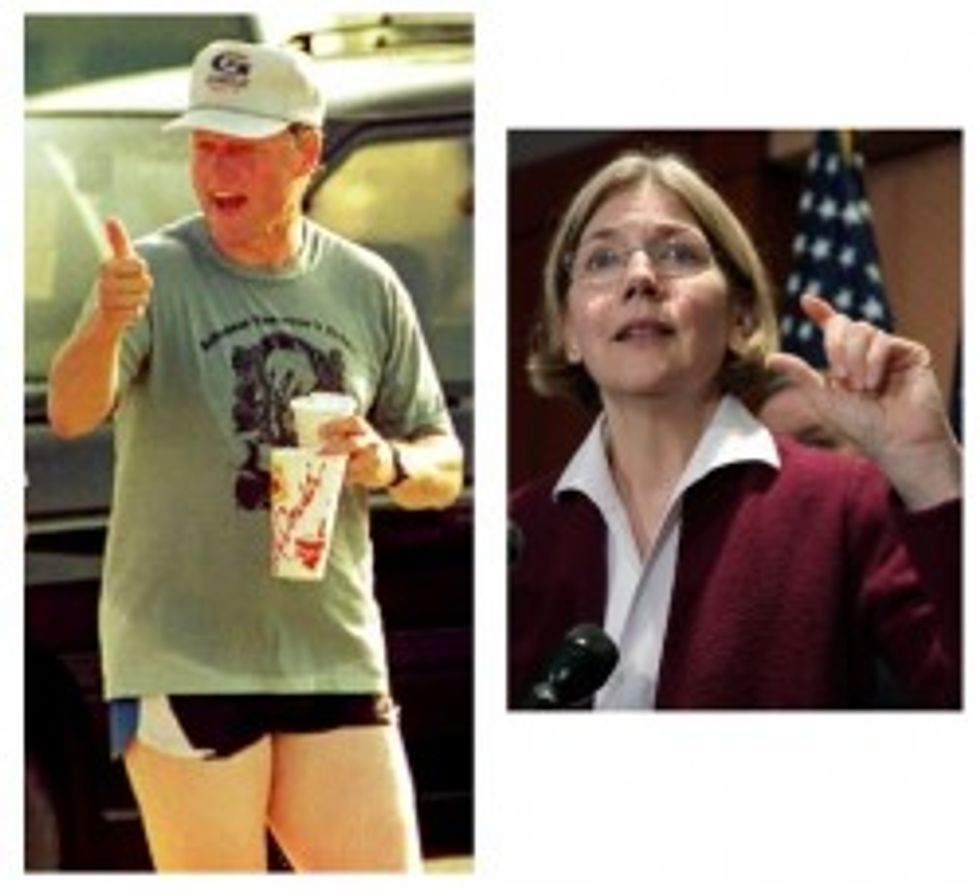 Welcome, Wonketteers, to the Now-Slightly-More-Godly DNC, Night Two! They are letting the new guy run the liveblog tonight, and the new guy does not even have cable! If there's any kind of over-the air signal, we will at least have PBS or something, otherwise, it's an NPR /DNC livestream blog.

9:20 There is someone speaking Spanish! Do we press "1" or panic now? Oh, it is a Spanish Lesson to say "forward" and "backward" in espanol. I feel smarter already.

9:30: Now we are buying a car online. Wait, this sounds like an ad. Ah, now we see -- A CEO is telling us that he built it, but that he needed roads and bridges and the government to be partners. He will not be invited to play in Galt's Gulch, will he?

9:32: It's the auto bailout. Ordinary but largely telegenic Americans are glad. And now, an Ohio UAW thug! As thugs go, she is pretty easy on the eyes. But watch out for her if you're selling trinkets at a teabagger rally.

9:40 UAW Head Thug! And he has very dubious stage presence, even if he's praising one of the good old progressive Republicans that are extinct today. He is saying things that we agree with, but we need a soda pop. We didn't know we would be liveblogging or we would have stocked up on beer. Mmmmm. Why doesn't anyone deliver beer? That would help the economy.

9:45 Walking across the room makes the digital antenna signal go kerflooey. Then it came back on when we sat down. No one can explain the science of this. We must pray. UAW head thug is saying more things that are good but anodyne. Sigh. Coke Zero will never be beer.

9:47 Randy Johnson was laid off by Mitt Romney, which is why he is no longer the Big Unit. Cindy Hewitt didn't even know who Mitt Romney was when he started running, and then she heard he ran Bain, which fired her. Why don't these people understand that that is just the way Capitalism works? They should borrow money from their parents. David Foster is a guy we would have a beer with (sob!)

9: 58 Luke Russert has shared his wisdom with us via the Twitterz:

Speaker at #DNC2012 suggests #Romney makes money with no moral compass. A stretch considering his tithes so much or fair game?

If you give money to your gay-bashing church while you throw people out of jobs, you can't really be all that bad.

10:05 Sandra Fluke is here, and the character-assassination drones have already been launched. She is bringing some grade-A angry here, and we like that.

10:08 We do feel compelled to point out that quantum theory suggests that both of those futures actually could exist in a multiverse. Star Trek would not lie about this.

10:12 David Brooks are you listening? Here is a man talking about how capitalism can be successful when it pays its employees a living wage. One might even think that the well-being of consumers has something to do with the economy, maybe? Aaaand now he's kind of rambling and losing us with this list. His talking points come in a bulk pack.

10:15 We will now just plain melt with love for Elizabeth Warren.

10:21 Um. We are supposed to be snarking, but damned if we aren't just rapt. Here is a woman who plainly and simply knows how to take a simple truth -- "The game is rigged" -- and back it up. This is some kind of class warfare, because she is pointing it out.

10:24 Why is she not stomping Scott Brown by 20 points? This is class warfare we can believe in.

10:27 (OK, that nervous tongue-over-your-teeth thing? Distracting. We still love you, don't worry. But it's a little schoolmarmish, maybe.)

10:30 "We build it together" -- that is a good reply. Somebody should have said that the first time around...

10:33 This is like that Price-Waterhouse thing at the Oscars, kinda. Only shorter.

10:35 Freakin' Fleetwood Mac just shook loose the recollection that there is still a half bottle of scotch in the kitchen.

10:37 Bill, you goddamn moderate sellout and zipper slave, you disappointed me, but I'd still vote for you, you crazy bastard.

10:39 This man gives good speech. Mr. Brooks, did you notice the logical case for an economic policy there? Oh, did you remember your scotch, too? Yummmm.

10:45 We want to go be cooperative with someone right now, if you know what we mean. And we think you do.

10:50 Bill is just having so much fun, and making this look easy. There should be, like, a Senior Presidential Tour where former presidents like Bill can do this from time to time.

10:55 Jim N from Wonkette's Sekrit Headquarters sez "this fucking guy is going to go on for 100 hours."

10:56 Bill is downshifting into Explanation Mode. OK, the scorekeeper thing was fun. At some point, like, say, Hour 50, "Let me tell you one more thing" is going to elicit only a sad, painful laugh.

11:00 We suddenly remember when the term "policy wonk" entered the national vocabulary.

11:03 Quoting commenter fuflans for truth: "and go ahead fact checkers: fact check away."

11:05 This is the most fact-based speech of either convention. Remember when facts were considered persuasive? We suddenly feel like going and reading something that presents a logical case for a proposition and deploys compelling evidence to support its argument. We fear that the impulse will pass, however.

11:10 You know what's weird? WE want to listen, too. Bill Clinton is reviving the ancient art of evidence-based argument, ladies and gentlemen. And it is serious.

11:15 "Now, let's talk about the debt..." Could we maybe have a bit of Romney-bashing, too? Because we are not used to this "thinking about facts" thing, we are so out of shape in that area.

11:18 We are just going to sit back and let the waves of facts and numbers wash over us. This man is making a strong case for Clinton 2016. No, no, settle down, that is silly. But wouldn't it be just SO FUCKING COOL if arithmetic could become a dominant theme of this election?

11:22 Commenter Callyson, quoted for truth: "No one can kick the GOP's ass over deficits better than Bill Clinton"

(With votes of course.)

11:29 Melissa Harris-Perry on the Tweetz: "Ok is it weird that President Clinton started the speech in his 60s but is apparently 40 at the end?"

11:33 Whoooo! Um, Wonketteers, was that good for YOU, too? Christ, we don't even smoke and we need a ciggy. Thank you for making my debut (really, one should be precise about these things) as a livebloggennator so damn much fun. OK, Bill helped. Goodnight, you filthly sluts!