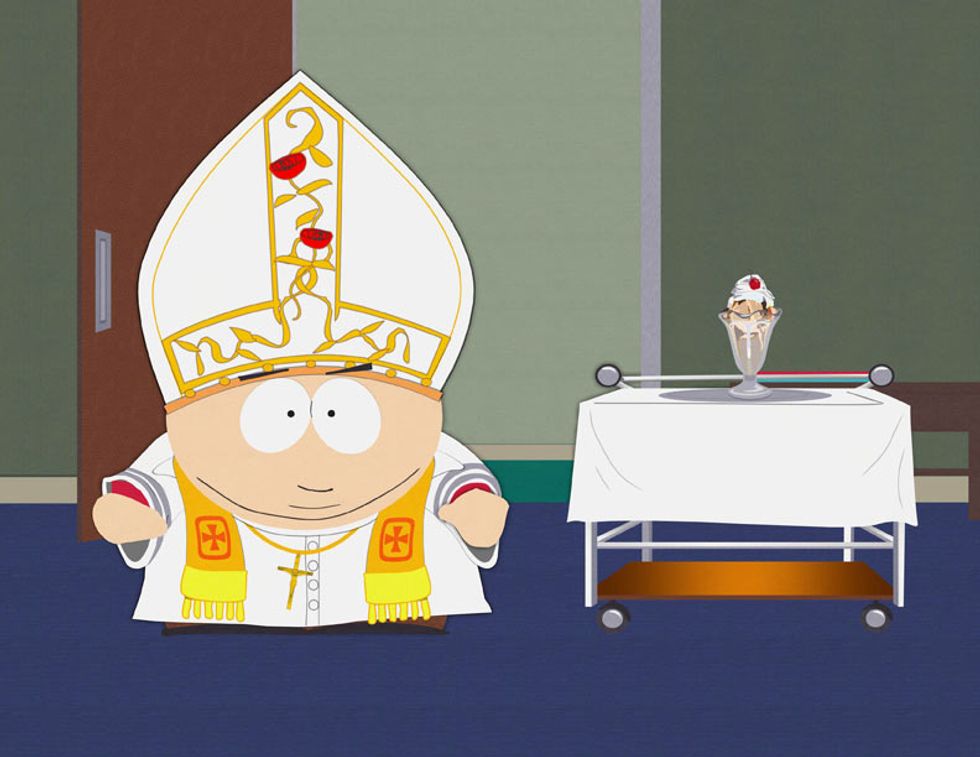 Not the actual pope.

So Pope Francis was flying back to Europe or outer space or wherever he lives, and some reporters decided to ask him about the most important issue facing America, which is Kim Davis, the yokel Kentucky clerk dragging a cross to Calvary, screaming "Y'ALL WAIT UP!" at Jesus and the two thieves, because she just cannot sign a civil marriage license. Of course, this has been translated from Popish to English, so maybe they got it all wrong:

So that sounds like he hearts Kim Davis! Now, to be fair, commie pope pulled a few bait-and-switcheroos while he was in the US and A. Like, remember when he chatted up Congress, and all the wingnuts got excited when he started talking about the sanctity of life, awwww yeah, he's gonna hit our G-spots and call for defunding Planned Parenthood! But then, sadface, he called for the abolishment of the death penalty, which made Ted Cruz very disappointed, because killing people is the real "pro-life" position, duh, stupid commie pope. And then later, wingnuts got excited again when the pope talked about "the family," and they just KNEW he was going to offer to go to jail in Kim Davis's place, but instead he talked about economics and the effects of poverty on the family. HMMMMM!

So MAYBE what he meant is that Christian government workers shouldn't be forced to participate in executions, and he doesn't give two papal fucks about Kim Davis.

Or maybe he does. Meh, New Pope is not perfect. He's doing a lot of good, but he still leads a Church that, institutionally, considers the homosexuals to be "intrinsically disordered." So there's that.

WONKETTE ASSESSMENT: Not his finest moment, but pull those rosary beads out of your asshole, Mike Huckabee, because first of all, they are not a toy, and also, the pope still doesn't seem to give too much of a fuck about America's wingnuts.

And now for some other Kim Davis news:

As you all SHOULD know, Kim Davis got the Award For Being The Best American Martyr Of America Award from the Family Research Council -- Josh Duggar's former employer -- at the East Coast outpost of the Folsom Street Fair known as the Values Voter Summit. And her husband came along, of course, because come on, Kim Davis alone in a hotel with a bunch of rabid right-wing men? Be still, their throbbing dicks. Of course she needed supervision. Anyway, Bubba or whatever his name is (it is Joe) knew it was a "Here's your one chance, Fancy, don't let me down" moment, and a MUCH bigger deal than just meeting Mike Huckabee, so he borrowed a shirt and tie from somebody, maybe one of Kim's gay friends:

And now compare that to when he met Huckabee:

Good job, Bubba! We know it takes time to get used to being married to a rightwing celebrity, but we're sure Tony Perkins has some self-loathing gay guys on staff, ready to give you a queer-eyed makeover whenever you're ready.

So here's a funny! During that very same Values Voter leather sex party, Kim Davis's very stupid lawyer Mat Staver, of the dishonest, very stupid Liberty Counsel, showed everybody a really cool picture of how 100,000 Peruvian Spanishes had dropped all their Peruvian Spanish business to go rally for Kim Davis and all the other American Christians currently being persecuted and Holocausted just because they love Jesus. Here is that picture:

Did this actually happen? Hahahahaha, of course not, Mat Staver is a fucking liar. Zack Ford at Think Progress committed an act of journalism:

The image seems to have first been tweeted the day before the summit by Matt Barber, also of the Liberty Counsel, who claimed, “Christians in Peru had a prayer rally for #KimDavis & American Christians. over 100K showed up. Amazing!” Staver posted the image a second time on Sunday, claiming that Peruvian Congressman Julio Rosas was responsible for organizing it.

There is not a single news story about a prayer rally taking place in Peru for Kim Davis. There is not a single post on Rosas’ Twitter or Facebook about such a rally, though he did send one tweet of support for Staver’s defense of Davis. And the image is almost certainly from a prayer rally known as “Jesús Te Ama Y Te Cambia” (“Jesus Loves You And Changes You), which did take place in Peru — over five days in May, 2014.

Mat Staver and Matt Barber don't care if it's true or not. All that matters is that they gave the fucking morons at the Values Voter Summit a tingle in their woo-woos, and convinced them that far, far away, in a country that might be in Asia, might be in South America, they don't fucking know, there are people who care about them and believe their struggle is real.

But haha, it's not true, nobody cares about them, the end.