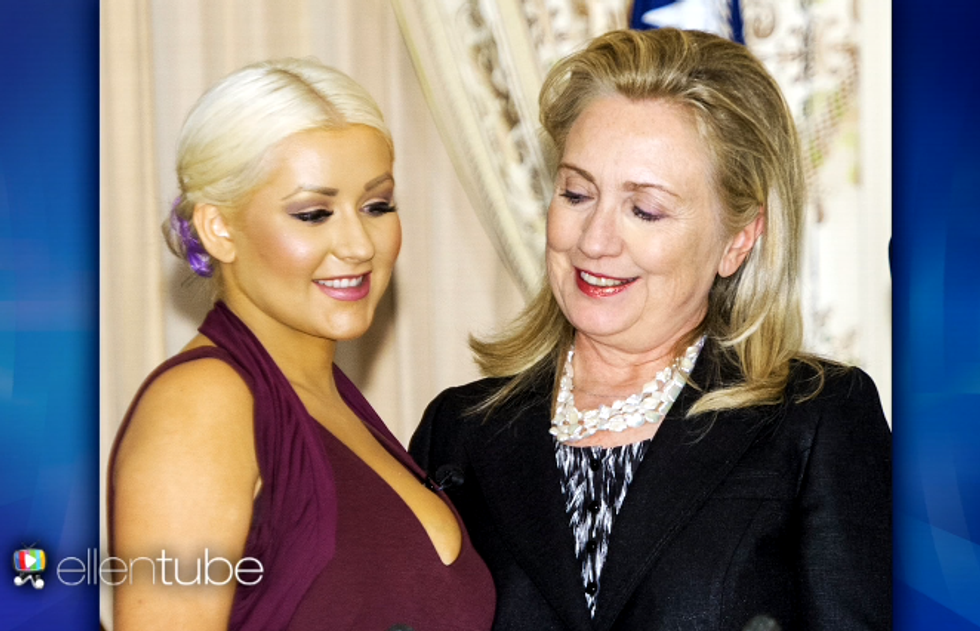 "She supports the girls." Actual quote Christina said, about Hillary supporting HER BOOBS.

UH OH, TIME FOR JOURNALISM EXPLORATION TIME. Christina Aguilera, the singer with the big shiny voice and also some boobs, was on the Ellen DeGeneres teevee funtimes hour on Monday, and she shared the picture above, of a certain lady who is running for president of America, gazing upon the sumptuous knock-knocks of Xtina!

Let's go to the tape:

ELLEN: I think the last time you were here, there was a picture of you staring, was it Hillary staring at you or you staring at Hillary?

XTINA: She was staring at my bosoms! She supports "the girls."

ELLEN: Yeah she does! You can't help but support those girls!

SO MUCH LOVE, FOR "THE GIRLS"! Now, we are not saying that this means Mrs. Clinton is a big old Hillzbian, because lots of people like boobies. We are A Gay Man, and we like them fine!

[wonkbar]<a href="http://wonkette.com/593301/new-york-times-just-suggesting-maybe-hillarys-getting-some-lesbian-ass-on-the-side"></a>[/wonkbar]And we are also not saying that this means all the New York Times's conspiracy theories are true, about how Hillary and Huma Abedin are secret lovers who paid for the Benghazi murders by cashing in rewards points on their joint Home Depot credit card account, which was all well and good until Huma saw this picture of Hillary doing sexxx eyes at Xtina's breastesses, at which point she stormed off in jealous anger, leaving Hillary alone THE WHOLE NIGHT Benghazi was going down. (UNLESS THAT IS REALLY WHAT HAPPENED.)

We are just saying that this is a really great picture of Hillary Clinton checking out a hot lady's upper bathing suit area, and obviously approving of what she sees.

As to whether Hillary actually loves Xtina's boobies more than she loves America, that was a silly trick question. She obviously loves them EQUALLY as much as she loves America, and we know this because Lady Liberty's got a nice rack too, the end.

[The Ellen Show via The American Mirror]