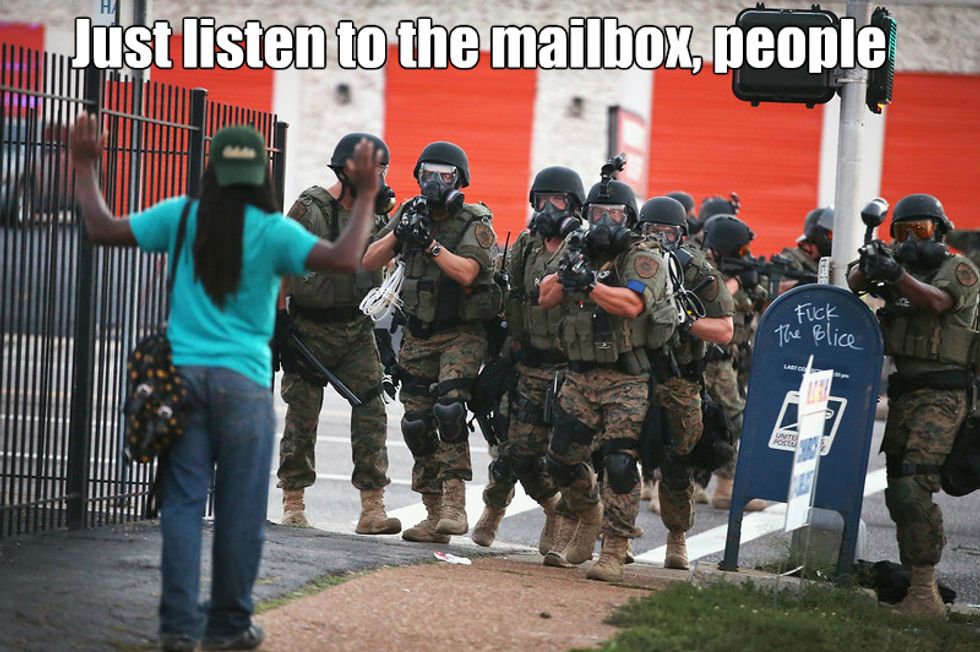 In news that proves once and for all that the Obama administration hates white people, the Department of Justice islaunching a civil rights investigation of the Ferguson, Missouri, Police Department. This new investigation will go beyond the existing investigation into whether Officer Darren Wilson violated Michael Brown's civil rights, what with all the killing of him to death. The DOJ's civil rights division will look at the broader history of Ferguson's Keystone Stormtroopers to determine whether there's been a pattern of abuses, which of course there has been, but they're going to do it all legal-like, instead of just reading the interwebs like a bunch of filthy bloggers. Wonder if they'll find anything? We're thinking that is just possible. For instance, there's this, from the Washington Post:

The Washington Post reported Saturday that five current and one former member of the Ferguson police force face pending federal lawsuits claiming they used excessive force. The lawsuits, as well as more than a half-dozen internal investigations, include claims that individual officers separately hog-tied a 12-year-old boy who was checking his family mailbox, pistol-whipped children and used a stun gun on a mentally ill man who died as a result.

And then of course there's also the notorious 2009 case where Ferguson cops arrested Henry Davis, an unlucky guy whose name matched that of a completely different person with an outstanding warrant, beat him while he was in custody, and then charged him with "destruction of property" for bleeding on their uniforms (and even that turned out to be bogus; the officers later admitted that their uniforms hadn't been bloodied).

And, of course, there's the tendency of Ferguson police to target blacks for traffic tickets, which often results in arrests and additional charges, while whites have to snort cocaine directly off their dashboards to be arrested, according to reliable source John Oliver.

Perhaps the DOJ investigators will want to talk to Mya Aaten-White, who was shot in the head after a Mike Brown rally in Ferguson but was never interviewed by police. But the cops were kind enough to take the bullet from the hospital, for safekeeping.

Reaction in the Wingnuttosphere has been mixed, so far. Glenn Beck's The Blaze completely fucked up its summary of the Washington Post story, suggesting that the new probe would focus primarily on "whether profiling and excessive use of force played a role in Brown’s death," but not mentioning that the investigation will look for wider patterns of abuse, because why would they want to actually mention something like that?

As of this morning, neither The Daily Caller nor Breitbart.com addresses the story on their first screen's worth of news. There's no mention of the DOJ investigation in Ferguson, although the Daily Caller does feature a piece on black conservative Jason Reilly's new book, Please Stop Helping Us: How Liberals Make it Harder for Blacks to Succeed.

At least the Stupidest Man on the Internet is addressing Ferguson this morning. Jim Hoft has this EXCLUSIVE STORY:

Missouri Sen. Roy Blunt (R-MO) told The Gateway Pundit on Thursday that police vehicles suffered $100,000 in damages during the Ferguson rioting. Much of the damage was from gunfire.

And, here we were told these were peaceful protests?

The piece emphasizes that there was looting and rioting, and adds, "According to Senator Roy Blunt at least half a dozen protesters were shot by fellow protesters in Ferguson." Also, too, Hoft reminds us, in boldface, that "For some reason the mainstream media ignored this information during the riots."

Does Hoft mention the DOJ probe? Not yet, although he does like to revise on the fly. Also, in the short time it took us to put the previous paragraph together, Hoft changed his headline from

Wouldn't want anyone to think that any blacks shot in Ferguson were "victims," after all. They are all looters and rioters.