Donald Trump Airs His Grievances: The Media (Who Are Probably Jooz) 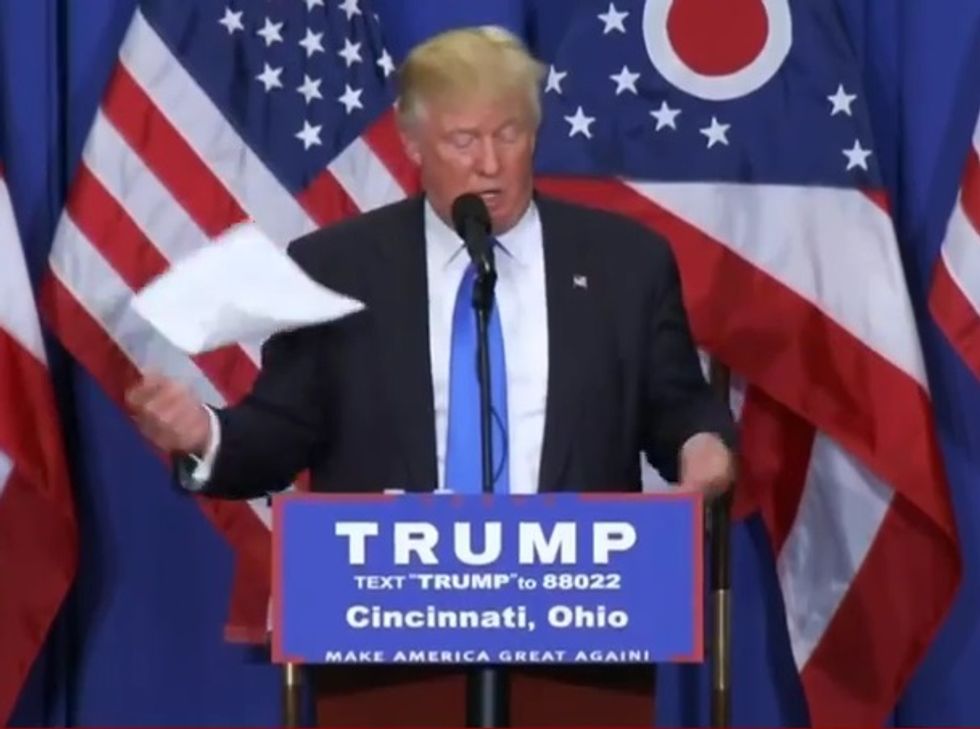 Who needs notes? Not Donald Trump

Donald Trump started his speech in Cincinnati Wednesday looking like he might finally take his advisers' advice, and focus on the FBI's recommendation to not send Hillary Clinton to the email Gulag. He even had a list of supposed lies that lyin' Hillary had lied about, but Trump really wasn't into it. After the first two or three, he said he wouldn't read all of it because he didn't want to "bore" his Hillary-hating audience with the reddest meat the Republicans currently have. After a few minutes, Trump literally tossed the list -- to cheers -- and launched into an unscripted rant that was even more erratic and unfocused than the typical Donald Trump "speech." Masochists can watch the entire painful mess here.

Once he tossed the notes, Trump's face really lit up, because now he was free to talk about the thousand injuries from the press that he has borne, and how very, very unfair everyone has been to him. He stared with a rambling gripe about coverage of his declaration of admiration Saddam Hussein's fine job of killing terrorists, and exactly as we'd predicted, he claimed the media completely ignored the fact that he'd said Saddam Hussein was a very bad guy. They didn't, of course, but Trump continued to insist that Saddam was simply the best at killing terrorists, when in reality he had a habit of slaughtering anyone he perceived as a threat, and then calling them terrorists. (As Chris Hayes noted the other day, Trump did get one thing right: None of Saddam's enemies got the luxury of a fair trial.)

Trump Definitely Not Racist This Time

Trump spent a ridiculous portion of the speech rehashing the story of his campaign's retweeting that anti-Semitic image of Hillary with a big red Star of David, which was absolutely only a sheriff's star, because she's in trouble with John Law, or maybe just a regular star that means absolutely nothing, and only a crazy person would think it was anti-Semitic, although of course Trump didn't mention the image originated on the gleefully racist 8chan, and was created by a Twitter user who just lurves anti-Semitic and racist memes.

Trump apparently doesn't actually know the term "anti-Semitism," since he never actually said it, but he kept picking at the tweet story like a scab. Trump turned to his travails with this beautifully Trumpian aphorism: "In life, when something's unpleasant, don't watch it...When people treat you unfairly, just turn your back go somewhere else. Or knock 'em on their ass!"

In Trump's retelling, the Tweet was selected by "one of my guys, who's married to a Jewish woman," and there was a star on the Tweet. "It's a star! Like, a star!" Ah, but "in the minds of the press, only," it was a Star of David. No way!

Trump then turned the tables on the dishonest media, claiming that if anyone thought it was somehow supposed to be a reference to Jews just because there was a pile of money behind it, then "They’re racially profiling, they’re profiling, not us, because why are they bringing this up?" Gotcha!

Next came the Listing Of the Jews, in which we learned that Donald Trump has many Jews in his family, and ergo cannot have a problem with the Jews, now can he? His son-in-law, Jared Kushner, is Jewish, and Rump's hot bangable daughter converted, too, and Trump's grandchildren are Jewish. And he loves them! So many wonderful Jews in his life.

But for some reason, only the dishonest media saw a Star of David, it's so sad. "These people are sick. I'm telling you, they're sick. They're sick." After a few more digressions from his digression, Trump returned to the star, and insisted he told a campaign worker,

"You shouldn’t have taken it down." I said. "Too bad, you should have left it up.' I would have rather defended it, just leave it up and say "That's not a Star of David, it's a star!"

Then Trump was on to some other dumb shit, explaining the how Hillary Clinton (and CNN) only created the weekend's fuck-tussle over the tweets to distract from the FBI investigation of Clinton's emails, and that the biggest victim of the decision not to prosecute was Bernie Sanders, who had been patiently waiting for the nomination to fall in his lap when Hillary was indicted.

Strangely, even though only the crooked media thought they saw a Star of David in the image created by and for racists and anti-Semites, Trump didn't condemn any of his idiot racist followers who thought the image was the funniest ever, and who sent New York Observer writer Dana Schwartz a ton of anti-Semitic tweets after she called attention to the tweet. Here are just a few of the ones she put in a slideshow:

Who knew? Trump's anti-Semitic fans must be a bunch of deluded journalists!

Trump also declared the issue completely over in a radio interview ("It's a star!") and in a tweet where Disney's graphics department also used a six-pointed star graphic:

Some clever Hillary Clinton staffer suggested that Trump really ought to simply Let It Go:

(Trump took that evidence from another racist Twitter user, who would ever have thought?)

And that seems to be where Donald Trump's brain remains: Frozen.