Donald Trump And Paul Ryan, Will You Two Please Just Have Sex And Get It Over With? 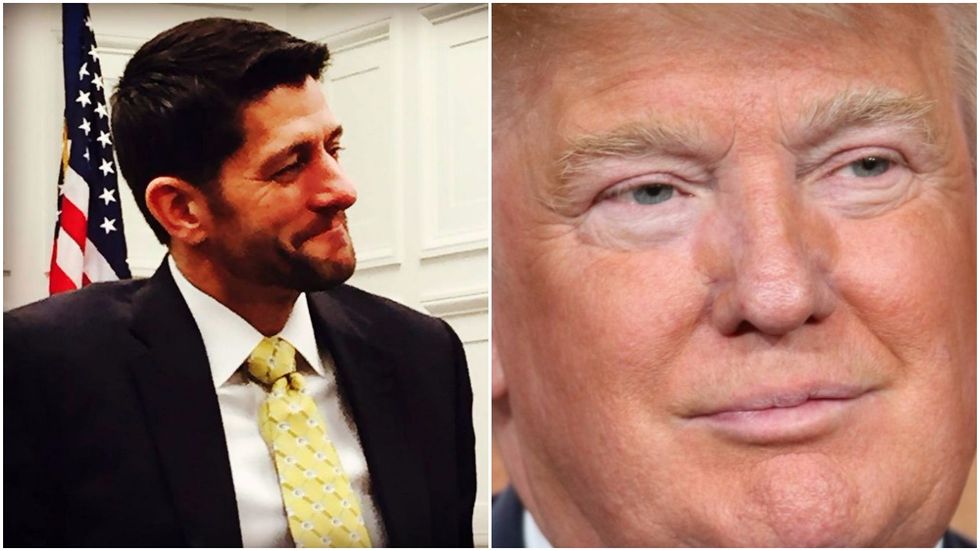 Look into each other's eyes.

There's a battle of halfwits going on right now, between presumptive Republican nominee Donald Trump and the pinchable face cheeks of House Speaker Paul Ryan. Ryan's been waffling back and forth on Trump, saying he doesn't like it for the GOP frontrunner to be such an unhinged egomaniacal racist, but never actually saying he won't support him. But then last week, he started dipping his dick in the Trump waters, saying, oh well, we "come from the same principles." Could there be love on the horizon?

Hard to say, because Paul Ryan has gone off script! He told the journalist called Jake Tapper that right now, he abso-tively posi-lutely cannot support Trump, because reasons, and he most certainly will not change his mind on that, until he does:

I'm just not ready to do that at this point. I'm not there right now ... I thought about this two days ago. I thought, actually, this thing was going to go to June 7 at the very least — probably to a convention, and so this is all pretty new for us. The bulk of the burden on unifying the party will have to come from our presumptive nominee. I don't want to underplay what he accomplished. ... But he also inherits something very special, that's very special to a lot of us. This is the party of Lincoln and Reagan and Jack Kemp. And we don't always nominate a Lincoln or a Reagan every four years, but we hope that our nominee aspires to be Lincoln- or Reagan-esque -- that that person advances the principles of our party and appeals to a wide, vast majority of Americans ...

BLAH BLAH high-minded bullshit about how the GOP is supposedly some sort of Noble Institution worth saving, AS IF, LOSER. (Also ... Jack Kemp???) But he's just not ready, you guys! He and Trump have only been on like three dates, and Paul Ryan's mom said people who "endorse" on the third date are sluts, so just ... give him time. And be gentle, OK?

Well, would you possibly believe that Donald Trump was not happy with this idea that he "inherited" the party, and that he took to Twitter to bitch about it? UNPOSSIBLE, we know, but that has happened:

And would you believe Trump is just real pissy, in general, about how Paul Ryan is being such a hard-to-get prick-tease, and that he bitched on Twitter about that too?

And would you believe Trump also went on the "Fox & Friends" dildo-brain hour, and made some more mouth-bitching?

“You talk about unity, but what is this?” Mr. Trump said. “With billions of people coming into the party, obviously I’m saying the right thing.”

"Billions" of people coming into the party? We don't want to be presumptive, but we wonder if maybe The Donald is not all that good at mathing.

Trump wants the last word at all times, so he also said in a statement that he isn't ready to support "Paul Ryan's agenda" either, so nanny nanny boo boo, Make America Great Again!

So now that Trump and Ryan are making rage-boners at each other, Republicans are putting together a little beer summit/coffee chat/circle jerk meeting for these two boys, so they can learn to help a buddy out and see into each other's eyes. RNC chair Reince Priebus is confident that Ryan, when he's ready and once he feels comfortable with Trump, will Do The Deed and endorse:

“I think Paul’s just being honest with how he feels,” said Mr. Priebus, who is close to Mr. Ryan, adding that he expects that the meeting between the two men will still take place and that the speaker will support the nominee eventually.

“He said he’s not there yet, but he wants to get there,” Mr. Priebus said.

[wonkbar]<a href="http://wonkette.com/595270/paul-ryan-grabs-his-ankles-for-gop-wingnuts-will-be-speaker-until-they-kill-him-too"></a>[/wonkbar]Awwwww! This will work. Because Paul Ryan, adorable man that he is, is a total wuss. He's always like "I DON'T WANNA I DON'T WANNA I DON'T WANNA, oh fine, I guess I will." He did it in the lead-up to becoming speaker of the House, and he will do it with Trump, WHEN HE'S READY.

The only question left is will the RNC provide lube, or will Paul Ryan have to bring his own, as per usual.