Donald Trump As Good At Killing Obamacare As He Is At Everything Else. Again. 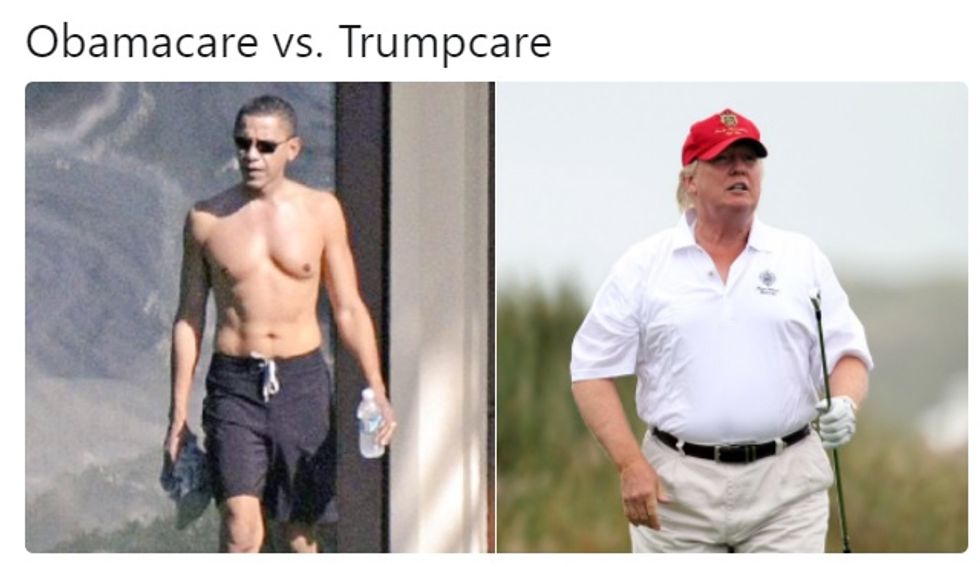 One of these isn't healthy a all

After the Senate passed the Republicans' Huge Taxcut Blowie For Rick Fuckwads Wednesday, Donald Trump was so excited that he shared a little secret, bragging that he had very stealthily repealed the Affordable Care Act without anyone noticing:

We didn’t want to bring it up. I told people specifically, be quiet with the fake news media because I don’t want them talking too much about it because I didn’t know how people --

Of course, repealing the individual mandate is different from repealing the ACA, too. It's definitely a terrible thing, and the CBO estimated killing the mandate will lead to 13 million Americans going without health insurance. And since it removes an incentive for younger, healthier people to stay in individual market plans, that means higher premiums for the older people who stay in the risk pool. The tax bill doesn't so much end Obamacare as just make it really crappy, and without enough healthy people in the pool to keep premiums stable, some insurers will definitely leave the market -- the very problem that Rs said was why the ACA was no good before they made it worse.

Senate Majority Leader Mitch McConnell -- who shouldn't be trusted on anything, of course -- suggested in an NPR interview yesterday that after spending most of this year failing to kill off the ACA, Senate Republicans were ready to "move on to other issues." South Carolina Sen. Lindsay Graham wasn't about to stand for such defeatism, so he took to the Twitters to proclaim Obamacare repeal today, Obamacare repeal tomorrow, Obamacare repeal forever! He was so proud of the great work he and other Republicans have done to prove the ACA can't work, by trying to wreck it, but he knows that the sacred mission of destroying health care for millions still hasn't been accomplished:

Huh. "Obamacare continues to crumble." YEAH YOU JUST SAID YOU PULLED A PILLAR OUT OF IT, YOU INSUFFERABLE ASSHOLE. We are definitely not referring anyone to Graham & Trump Architecture LLC.

Despite Republicans' continued insistence that Obamacare is dead and buried -- as they club it over the head and shovel as fast as they can -- Americans nonetheless signed up for health insurance plans on the federal ACA exchange in astonishingly high numbers this year. Team Trump slashed the promotion budget by 90 percent and shortened the ACA open enrollment period to just 45 days, but when enrollment at healthcare.gov closed last Friday, 8.8 million Americans had purchased or renewed plans. That's 96 percent of last year's enrollment of 9.2 million, in half the time. Over a quarter of the enrollees -- 2.4 million -- were purchasing health insurance for the first time.

Obviously, people want Obamacare and need Obamacare, even though Republicans have done their level best to throw up roadblocks and tell people there's no Obamacare anymore. As we've said before, it's like the end of "How The Grinch Stole Christmas" -- they just couldn't keep Obamacare repeal from coming this year. Let's have a round of that “Fahoo Fores, Dahoo Dores” song and carve the roast beast.

Seema Verma, Trump's head of the Centers for Medicare and Medicaid Services, had begged Congress over the summer to please repeal the ACA, because it's just the worst thing ever. Health and Human Services devoted money that should have been used to promote ACA enrollment to making videos about how the ACA ruins people's lives. The department slashed funding for ACA navigators to help people select plans and forbade HHS employees from attending open-enrollment kickoff events, because those events were "organized and implemented by outside groups with their own agendas" -- namely the agenda of enrolling people in ACA plans, which is no longer a HHS priority.

So after all that fuckery, how did Ms. Verma react to the news that people signed up for insurance in droves, with half of the enrollments coming in the last week of open enrollment? Duh -- she took credit for running a much more efficient operation than those Obama spendthrifts:

Fuck you, Seema Verma. You did everything you could to discourage enrollment but people enrolled anyway. Try to take away something people like, and they'll damn sure go out and get it. But please, don't go getting any ideas about what a terrific job you could do next year by limiting ACA enrollment to one week.

Trump and Company are trying to fuck up Obamacare, but people really, really want it -- and the numbers announced yesterday only cover the federal exchange. Many of the 11 states (plus DC) that run their own exchanges are still enrolling people until the end of January, and some areas affected by hurricanes also have an open enrollment extension. It's possible that once those state-run exchanges are added in, the total enrollment for 2018 may be close to the 12.2 million who signed up last year.

Not bad for a "crumbling" program. Obamacare was designed to be resilient, and there's every reason to believe it can be repaired and improved.

But first we have to get rid of the fuckers trying to pull down the building.