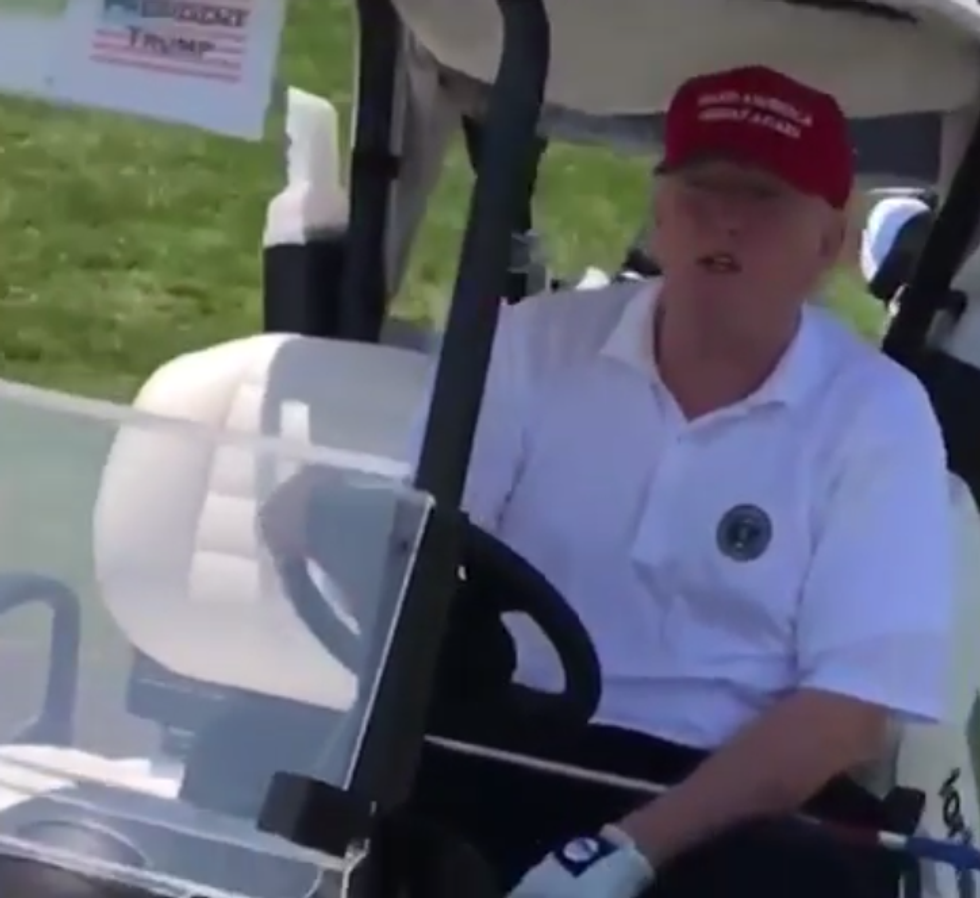 The Secret Service has run out of money for 2017 to pay its agents for all the hours they're protecting Donald Trump and his YOOGE family. This doesn't mean the Secret Service won't keep protecting them, of course, because thank Crom they can't just be laid off like common busboys at a Trump hotel. Rather, agents will have to keep working without pay, like managers of a Trump property, but with a far better chance of at some point getting a congressional appropriation to cover their back pay. Probably. The problem is simple: There are a lot more Trumps to protect, at a lot more places. And of course you have a president who travels far more than the previous guy, even though Trump complained constantly about Barack Obama's travel costs and golfing:

Of course, Obama never hit on the great idea of vacationing at places he owned, where the Secret Service gets the privilege of paying the president's business for the costs of protecting him. For example, Trump's visits to Mar-a-Lago and his Bedminster golf resort has cost the Secret Service some $60,000 for golf cart rentals in 2017 alone. You'd think maybe the Trump Organization would comp the golf carts for the people keeping the boss safe? We imagine there's some sort of ethics rule there requiring the Secret Service to pay but making it OK for the president to profit.

Saving so much money by making other people pick up the tab.

Funny thing: Back in March, the Office of Management and Budget turned down a Secret Service request for $60 million in additional funding it anticipated would be needed to protect the first family. Gotta be fiscally conservative, you know. But now, the allotted money is all gone:

Secret Service Director Randolph "Tex" Alles, in an interview with USA TODAY, said more than 1,000 agents have already hit the federally mandated caps for salary and overtime allowances that were meant to last the entire year.

"The president has a large family, and our responsibility is required in law," Alles said. "I can't change that. I have no flexibility."

The Obama administration had 31 people who received Secret Service protection, while under Trump, that's up to 42 people, several of whom are Trump's children, who do a hell of a lot of traveling. And to complicate matters, the overwork and constant travel have caused serious attrition in the service. Unless Congress steps in to provide funding, agents may not be paid for overtime they've already accrued. Normally, it would be a given that Congress would adequately fund the Secret Service, but this is a Republican Congress, so there's no guarantee they'll actually pay the bills. That Party of Personal Responsibility really is something.

Alles has been negotiating with congressional leaders to increase agents' combined caps for salary and overtime from $160,000 a year to $187,000 while Trump is in office. Even if that's approved, it still wouldn't be enough to pay 130 of the agency's top agents for time they've already put in. Hmm. Looks like Trump really is running the government like he ran his businesses.

All that unpaid overtime and stress, combined with scandals, has hurt Secret Service recruiting and led to attrition in the agency. We can see why; during the Obama administration, the Secret Service seemed to abandon its reputation for steely-eyed vigilance in favor of allowing weirdos to scale the White House fence and run inside, or to take an unauthorized ride in an elevator to chat with Barack Obama, while carrying a gun. Then there were the South American Prostitutes, whom the agents didn't even pay. So yeah, that would present a morale problem, and not just among Colombian prosties:

While about 800 agents and uniformed officers were hired during the past year as part of an ongoing recruiting blitz to bolster the ranks, attrition limited the agency's net staffing gain to 300, according to agency records. And last year, Congress had to approve a one-time fix to ensure that 1,400 agents would be compensated for thousands of hours of overtime earned above compensation limits.

Secret Service: The Rent At Trump Tower Is TOO DAMN HIGH

President Griftabuck can't seem to squeeze enough cash out of the Secret Service to make protecting his life worthwhile.

Here's a crazy thought: Maybe instead of preaching fiscal restraint when it makes no goddamn sense, Congress could actually pay enough to protect the goddamned president. And the goddamned president could stay in Washington now and then, just for shits 'n' giggles? And for that matter, maybe the Trump Organization shouldn't be trying to squeeze every last possible cent from the president's security detail? We don't like Donald Trump jetting off to Florida or New Jersey to go golfing all the time, but it would be nice if the people with the thankless task of protecting his flabby ass weren't the ones suffering for it.