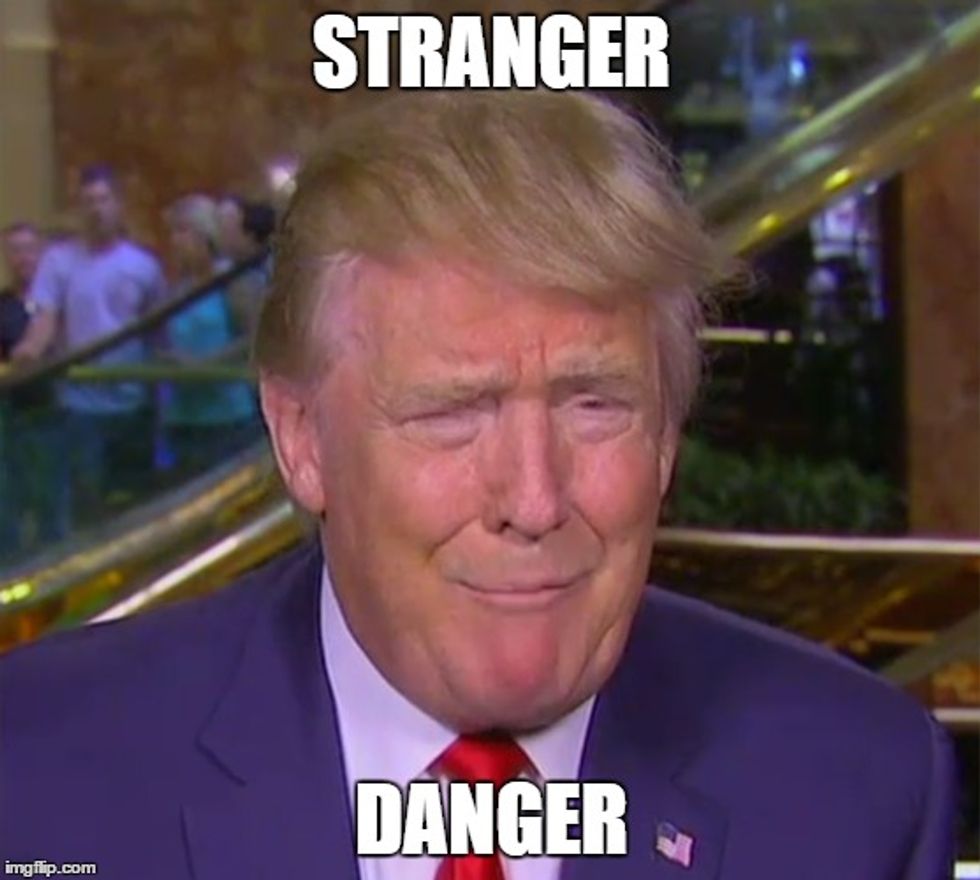 what your parents warned you about

Guess it's a day in Donald Trump's Cocktober, so let's talk about another time he was a pervert. We already told you this morning about how Trump had this naughty gross habit of using his power to walk in on Miss USA contestants and Miss Teen USA contestants, who were minor children. So our next natural step before we discuss Trump's groping allegations is 10-year-old girls, right? No, for real, how creepy is this?

Encountering a group of young girls at Trump Tower, the now-GOP nominee engages in small talk with one of the girls before saying, “I am going to be dating her in 10 years. Can you believe it?”

According to CBS, the clip first appeared in an "Entertainment Tonight” Christmas feature.

Awwwww, Christmas! The stockings were hung by the chimney with care, and Donald Trump is under the mistletoe doing orange sex slime to girls of all ages!

Look, we don't know what this ultimately says about Donald Trump. It's certainly not the first time he's said things about girl children -- we know that thing about how he patted himself on the back for NOT wanting to bang Paris Hilton when she was 12. We know when Ivanka Trump was 17, she made her dad PROMISE not to date anybody younger than her, because EWWWW GROSS DAD, don't date kids! We know Trump has always found his own daughter to be quite the looker.

Was Trump actually sexually attracted to this 10-year-old girl? Unclear. What's clear is that he views ALL FEMALES in direct relation to how much he desires to initiate sexual congress with them. They are either fuckable right now, will be fuckable in a few years, or they are gross fat slob pigs who bleed out of their wherevers at him, by asserting their agency as females.

Trump's a big fan of saying "Nobody respects women more than I do," which is of course a terrifying thought. Hell, back in 1993 when Trump was being slightly more honest, Howard Stern asked him if he respects women, and he said, "No, I can't say that either." It's in this Hillary Clinton ad!

What a lovely man he is.

So, how many more nasty allegations about Trump's behavior with women will come out between now and November 8? Place your bets in the comments, which are not allowed, but we're going to go with "eleventy-three million," which means we're all gonna need SO MUCH MORE brain bleach.