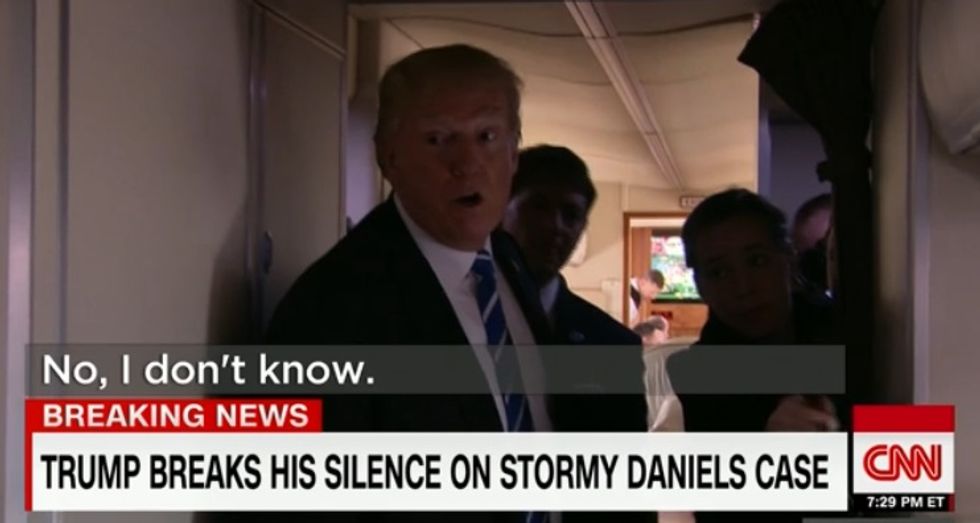 Pres. Trump tells reporters he did not know about $130,000 payment to Stormy Daniels before the 2016 election. https://t.co/iM43w2c8uapic.twitter.com/YS0RdqtWqJ

Donald Trump finally had something to say about l'affaire Stormy Daniels yesterday, and it was "No" -- in reply to a question about whether he knew his lawyer, Michael Cohen, had paid the porn actress $130,000. That may turn out to be one of the more legally damaging monosyllables he's ever uttered. After all, if he didn't know about the hush money, then clearly Trump's saying he wasn't a party to the nondisclosure agreement Cohen arranged with Daniels, and that's not going to help Trump and Cohen in their attempts to sue Daniels for $20 million for violating the agreement. The one Trump says he didn't know anything about.

Trump also said he didn't know where Cohen would have gotten $130,000 -- maybe from a paper route, a lemonade stand, or laundering money for Russians, we bet. And Trump certainly has no idea why Cohen was going around paying money to Daniels -- he's just generous that way, perhaps?

Reporter: Then why did Michael Cohen make it, if there was no truth to her allegations?

Reporter: Did you ever set up a fund of money that he could pull from?

Since they weren't getting any more answers from Trump, the media decided to go ahead and ask Michael, the attorney. Michael Cohen wasn't picking up, but Michael Avenatti, the attorney for Ms. Daniels, certainly was. So MSNBC's Ari Melber asked him a few questions. Avenatti was quite happy to offer a few comments on the matter, oh yes he was:

Melber asked, "If Donald Trump says he didn't make the payment and doesn't know where the payment came from, does that call into question whether there's a valid contract in the first place?" Avenatti was fairly delighted to address that matter:

First of all, Ari, let me say Merry Christmas to you. Because it is a very, very, merry Christmas here in our camp. This is what happens when you have an undisciplined client [...] We waited patiently, and lo and behold, Christmas has arrived.

The president's comments on Air Force One are serious for him, serious for Michael Cohen. How can you have an agreement when one party claims that they don't know anything about the agreement? I mean, these guys are making it up as they go along -- they don't know what to say from day in and day out, and our case just got a whole lot better.

Avenatti corrected Melber when he said Avenatti seemed happy: "Ari, I'm not happy, I'm ecstatic. Let's be clear about that." Very important to get those nuances in there.

Avenatti said again that if Trump knew nothing about the payment or why it was made, then there's no agreement, which means the nondisclosure agreement had vanished in a puff of logic, as did the threat to financially ruin Daniels, because how can you enforce a contract that one party says he knew nothing about?

To prove he's definitely Wonkette material (CALL US, MICHAEL!), Avenatti added that Cohen could be in big lawyering trouble if he really did negotiate an agreement that Trump knew nothing about. If Trump's being truthful (unlikely), then Cohen "went off on his own -- half-cocked, if you will -- and negotiated this agreement, made the payment, without any knowledge by Mr. Trump." Trump's statement, Avenatti said, had "effectively thrown Michael Cohen, now, under the bus."

Also, boy howdy is Avenatti looking forward to asking Donald Trump to repeat all this in a deposition, especially Trump's refusal to answer that question about whether he'd set up a fund for Cohen to use:

My understanding is that he denied a couple subsequent questions as to whether he has set up a fund from which this payment would be made or reimbursed. I find that quite interesting. And I find that certainly a topic that we're going to explore in connection with his deposition, which we're going to be making a petition for on Monday.

Later yesterday, in an interview with Lawrence O'Donnell, Avenatti was quite confident that if he can get depositions from both Cohen and the "president," their attempts to go after Daniels will fall apart completely:

So yes, things are getting pretty interesting. Might be time for Trump to up his game and send an aircraft carrier to the border with Mexico.

Are you a fairly regular Wonkette reader and have had a nagging little voice for some time saying “you should throw Wonkette a buck every month”? That is called your conscience. Listen to it! It's occasionally right!