Donald Trump Brags About Making Shit Up, Because Only Losers Need 'Facts' 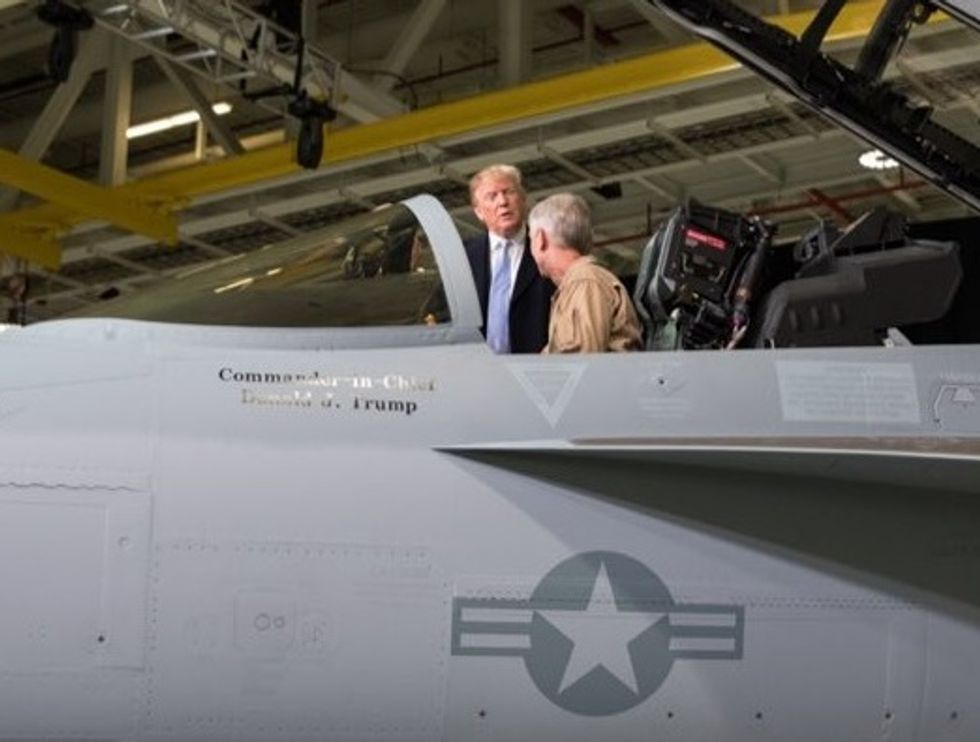 'It's got my name on it. You have to let me sit in it and pretend to drive.'

Donald Trump gave a closed-door speech to Republican donors in Missouri yesterday, but the Washington Post got its hands on a recording of the talk. Trump told a hilarious story about how he does diplomacy: by just making shit up, as long as it sounds tough. He seemed really proud of how he took that cocky Justin Trudeau down a peg with his genius for fast thinking:

‘Well, sir, you’re actually right. We have no deficit, but that doesn’t include energy and timber. … And when you do, we lose $17 billion a year.’ It’s incredible.”

So the point of the story, we guess, is that Donald Trump trusts his instincts, and you should too, because even though he didn't know, making shit up was the right choice because Canada is just killing us!!! Oh, except for the part where WaPo points out that Trump was still wrong:

But don't you see, that's only because we're so stupid! And wouldn't you know it, other "fact"-checkers explained that even when you include lumber and energy, we still have a trade surplus with Canada:

This morning, Trump, because he is an idiot, explained why he knows he's right: because Justin Trudeau is so reluctant to talk about the "fact" that Canada is the one with the surplus.

The speech only lasted 30 minutes, but Trump managed to cram a whole bunch of his other obsessions into it as well, like accusing all of America's allies of ripping us off because we're weak, insisting we need to end NAFTA already because everyone's laughing at us, and, what the hell, he was rolling, so maybe we'll just pull out all our troops from South Korea since they're ripping us off, too:

He said the country had gotten rich but that U.S. politicians never negotiated better deals. “We have a very big trade deficit with them, and we protect them,” Trump said. “We lose money on trade, and we lose money on the military. We have right now 32,000 soldiers on the border between North and South Korea. Let’s see what happens.”

“Our allies care about themselves,” he said. “They don’t care about us.”

Maybe we should nuke 'em when they aren't expecting it! That'd learn 'em! They all hate us anyhow, so let's drop the Big One now!

The speech was at least ostensibly a fundraiser for Republican senatorial candidate Josh Hawley, who'll be running against Claire McCaskill this fall, although Trump didn't talk about Hawley too much, because after all, the crowd came to see Donald Trump, didn't they? So instead he rehashed how he won the 2016 election, in case anyone hadn't heard. He also explained why Conor Lamb won the special election in Pennsylvania Tuesday: because Lamb campaigned by agreeing with Trump on everything. That doesn't happen to be true, either, but why would that hold Trump back?

“The young man last night that ran, he said, ‘Oh, I’m like Trump. Second Amendment, everything. I love the tax cuts, everything.’ He ran on that basis,” Trump said. “He ran on a campaign that said very nice things about me. I said, ‘Is he a Republican? He sounds like a Republican to me.’”

Lamb actually opposed the tax cuts for rich fuckwads, but to know that, Trump would have needed facts, and didn't he just tell you people he makes shit up?

Trump also offered this intriguing, if inexplicable, example of how sneaky the Japanese are when it comes to taking advantage of Americans, by being totally unfair to American imports.

“It’s the bowling ball test. They take a bowling ball from 20 feet up in the air and drop it on the hood of the car,” Trump said of Japan. “If the hood dents, the car doesn’t qualify. It’s horrible,” he said. It was unclear what he was talking about.

Where did Trump find that little fact about why no American cars are sold in Japan? (Incidentally, they are, but let's not get bogged down in facts.) He probably heard it from a guy who saw it on the news, and that made it a fact for him. And for all we know, maybe that urban legend had its start with the old David Letterman bits we thought of when we read the WaPo story: