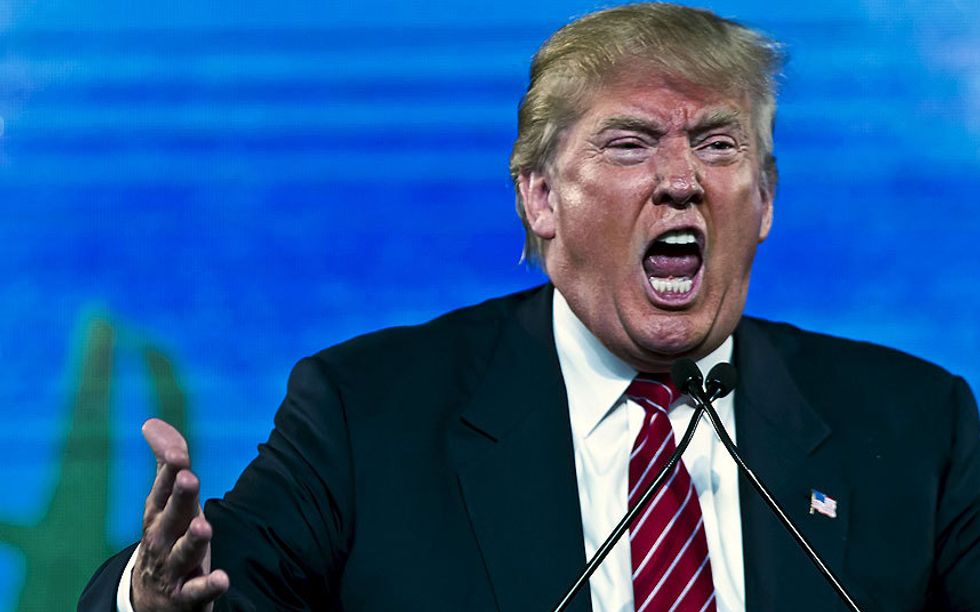 As you have probably noticed, Republican presidential contender (EXCUSE ME, presumptive nominee) Donald Trump is a very reserved man. A man who is very good at modulating the tone of his voice, and who most certainly never shouts or sounds angry. Thus, he was deeply upset and traumatized by Hillary Clinton's reaction to the way he very politely and nicely said that she was only getting by in this election by playing the "woman card."

"I haven't quite recovered — it's early in the morning — from her shouting that message," Trump explained on MSNBC's Morning Joe, whilst waving a lace fan in front of his face to keep himself from fainting, "and I know a lot of people would say you can't say that about a woman, because of course a woman doesn't shout. But the way she shouted that message was not — that's the way she said it, and I guess I'll have to get used to a lot of that over the next four or five months."

Yes, women do not shout. We all know that about women. No shouting. Ever. SHOUTING IS A MAN'S GAME, LADY! Like poker, which is why your woman card is useless against the TRUMP CARD. In Donald Trump's world, women are not supposed to shout, they are supposed to do beauty pageants and also maybe have line of hideous clothing and bedazzled shoes that seems to be taking over Marshall's these days. Certainly, they are not supposed to shout.

Probably they are also not supposed to be overwhelmingly beating him in basically every poll on earth either, which is another thing he is going to have to get used to over the next four or five months. Oh, and the fact that 70% of women -- who he maintains love him -- have an unfavorable view of him. Surely, by pointing out that Clinton is only doing well because she's a woman, and we as a people have it so easy, is going to make them love him even more.