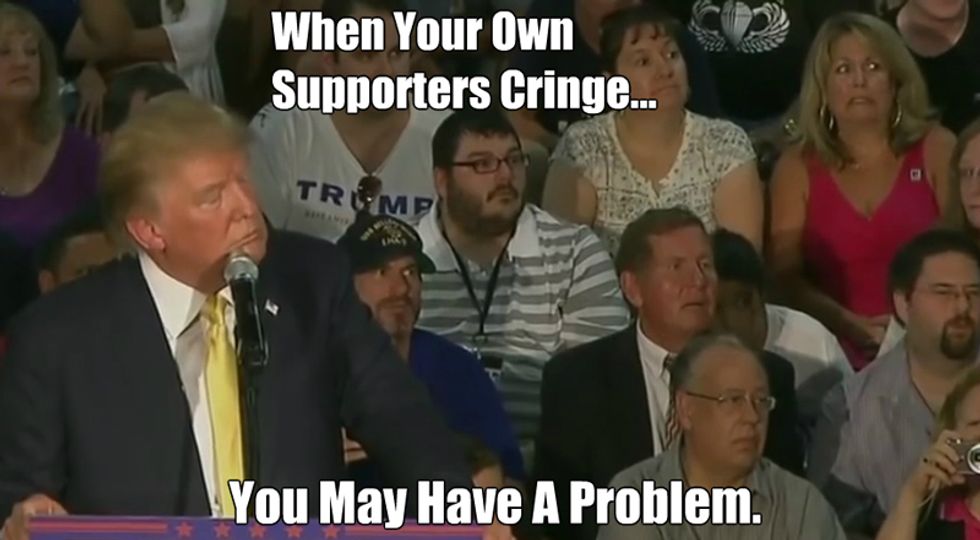 After vanishing for a couple of days to take care of an important "business transaction" (it did not involve buying a clue, we'll guess), Donald Trump finally addressed his failure to correct or even react much to a supporter's assertions last week that Barack Obama is a Muslim and "not even an American," and that there are jihadi training camps all over America. In a series of tweets, he fired back in typical Trump fashion, portraying himself as the real victim of all the meanies who thought maybe he had an obligation to tamp down his moron supporters' more insane tendencies. In fact, he liked them so much that he copied them and sent out another tweet of the whole string, for easy reading:

It's such perfect Trump: Donald Trump is the best, but he can never get a fair shake. And no, nobody except wingnuts would have complained about the moron questioner's free speech rights if Hairball had "challenged" him. Interesting word choice, isn't it? Trump could have said "corrected," but that would be too definite, now, wouldn't it? It's a pretty smart (and evil) strategy, though: deflect the criticism with blame, focus only on Obama while leaving the birther question open, and allow the bullshit about jihadi training camps right here in America to go "unchallenged." (Do we need to add that it's bullshit? It is definitely bullshit).

Trump stayed on message Sunday when he appeared on ABC's This Week, refusing to give a simple yes or no answer to George Stephanopoulos's question, "So for the record, was President Obama born in the United States?"