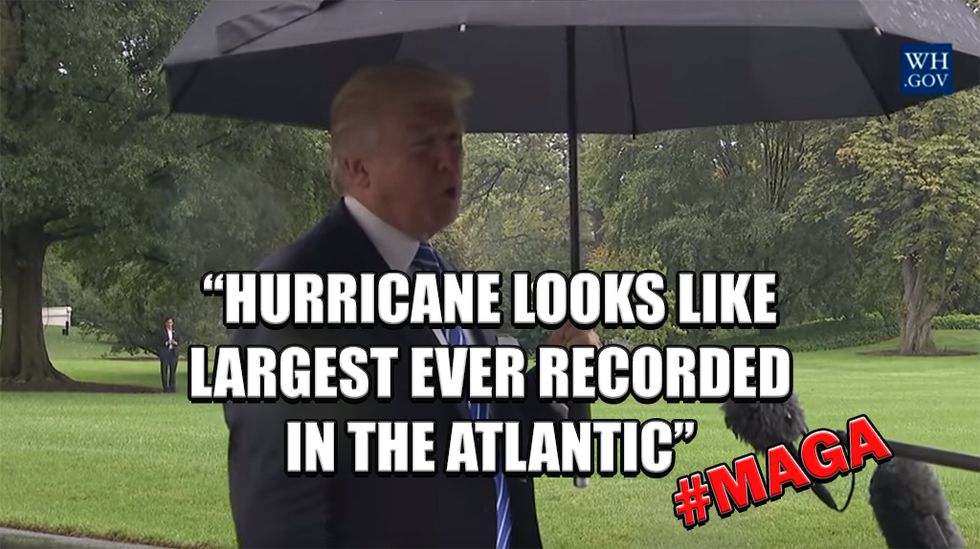 Obama never got such big weather!

The completely perfect winningness of Donald Trump continued apace Tuesday, with major reporting on two of last fall's huge hurricanes. Donald Trump gave himself a perfectly honest grade of "A+" on how well he handled both emergencies, because didn't you see him showing up and saying everything was great? He even gave the Puerto Ricans paper towels -- the really absorbent kind -- to clean up the place with. Unfortunately, the fake newsers at Politico say that nine months after Harvey and the miracle boat heroes, the federal government hasn't done a hell of a lot to help Houston's poorest neighborhoods, which seems awfully inconsiderate of the poor. Worse, a bunch of fake public healthers at Harvard estimate that the true death toll of Hurricane Maria in Puerto Rico is just a skosh higher than the 64 officially recognized storm deaths. According to their study, it's more like 4,600 dead, mostly due to lack of health care after the power went out and the infrastructure collapsed. No doubt Donald Trump is very ashamed of his early boasting now, huh?

Because we try to do journamalistic integrity now and then, the situations in Houston and Puerto Rico aren't entirely Donald Trump's fault: We learned FEMA was a mess after Hurricane Katrina, and while Barack Obama at least didn't hire a horse-show expert to run the agency, it still had big problems by the time Trump took office and proceeded not to give two shits about it except in terms of whether he was seen as doing a great job. As Craig Fugate, Obama's former FEMA director, acknowledges in Politico, FEMA programs just aren't equipped to help people who were already struggling before emergencies, and there's a whole history full of reasons and competing Congressional priorities behind that:

“It’s not a safety net,” said Craig Fugate, who [...] like other FEMA veterans, believes the current system is too confusing. “The system is really designed for the middle class. It’s not designed to take care of the pre-existing conditions.”

Unlike the middle class, most poor people are always just a car breakdown or a bad illness away from the streets anyway. An actual natural disaster can literally blow away nearly everything, and flood the streets to boot. In Houston, the Kashmere Gardens neighborhood, home to some 10,000 souls, about two thirds of them black, was built in a flood zone, although many residents had no idea, and also had no idea that to get any benefits at all from FEMA, they had to have flood insurance. Which is a cruel joke, since many couldn't afford flood insurance even if they knew they were required to have it (lucky them, they won't be jailed for not having it). Many people applied for disaster aid and were promptly denied, sorry, should have known about the flood insurance. And that's not all:

Other families, struggling with language issues and inexperienced with the federal bureaucracy, simply couldn’t cope with a system that even FEMA officials agree is too complicated. Still others fell victim to shoddy contractors who took their money and failed to make repairs.

Those who were lucky enough to navigate the bureaucracy got an average payout from FEMA of $4,300 — too little for some to make even the minimal repairs necessary to make their house habitable. And while more federal money is on the way to Texas, it may take a year or more after Harvey to reach communities like Kashmere Gardens, which are desperately trying to rebuild.

As Yr Wonkette is always saying, go read the whole thing. Mind you, the structural problems that led to FEMA doing such a rotten job of helping poor families don't get Donald Trump or Congress off the hook: FEMA has proposed some ways to help, but Congress would have to act. And any improvements would require leadership from someone with two things Donald Trump is utterly devoid of: the ability to understand the problem, and any interest in the problems of people who aren't him.

The other big hurricane story Tuesday was the release of a Harvard study that estimates the actual number of deaths in Puerto Rico caused by Hurricane Maria at around 4,600, based on in-depth surveys of a range of communities across the island and then extrapolated to the whole population of the island (the full study was published in the New England Journal of Medicine, but even the New York Times piece has a lot of methodological stuff for stats nerds to chew on). When compared to population and mortality statistics in 2016, the researchers reached their preliminary estimate of 4,645 deaths between the hurricane on September 20 and the end of December 2017. The researchers looked at the longer time period to include deaths resulting from the storm's disruption of medical services and facilities. They also warn their first number could be an underestimate -- more detailed surveys planned by the team could add hundreds or even thousands more deaths. Another separate in-depth survey, commissioned by the territory's government through George Washington University, will also try to fix a more accurate casualty count.

And again, these are deaths that occurred in the weeks and months after the storm, by the time FEMA and the Army were on the ground; the team found there were still significantly elevated death rates even in December 2017, two months after Trump had given himself the highest possible rating and taken credit for inventing paper towels and the term "Fake News." Lots of people still dying, but he had moved on -- why would he still be interested in a bunch of people who didn't vote for him?

Even the details of how the Harvard study was done are painful because they reflect just how bad things remain in Puerto Rico. The in-person surveys were done, as all important work is, by a small army of graduate students, which turned out to have a benefit that wasn't part of the analysis but mattered, goddamn it:

“It helped that a lot of them were psychology students, because they were going to be dealing with families in distress,” said Dr. Satchit Balsari, a research fellow at Harvard FXB Center for Health and Human Rights and one of the study’s senior authors.

The survey was also complicated by the same problems that everyone on the island has had to endure: Just getting to remote locations was a challenge, and in some cases, finding people to interview was difficult because the communities had been all but erased:

In part of Culebra, a small island off the main island of Puerto Rico, they arrived planning to interview 35 households. Only one person remained. “It was a bathroom and half a room,” said Domingo J. Marqués, an associate professor of psychology at Albizu University San Juan, who helped conduct the study with his students and who himself lacked power and running water for months after the hurricane. “All the other houses were gone.”

Longer-term studies will also have to be included in future work, since as one of the researchers noted, even by the end of the survey period in December 2017, the abnormally high rates of death "didn’t show any sign of coming down in the several months following the hurricane that we were looking at." Professor Marqués added that it's not surprising the government's official count of 64 deaths missed so many victims of the hurricane and the resulting blackouts:

“Even if they were really doing a good job, it was really hard unless you did something like we did — go talk to people on the ground,” he said. People, he added, “died alone in their houses. Nobody went there. Some of them were covered by a landslide, and months after they’ve not recovered the bodies.”

As the Washington Post points out, the new study blows away, as it were, Trump's own reasons for declaring -- in early October of last year, as deaths were still piling up -- Mission Accomplished. Trump said, in a presser with Gov. Ricardo Rosselló (mean Democrat and San Juan Mayor Carmen Yulîn Cruz wasn't invited), that he was tremendously proud of the tremendous response Donald Trump had personally overseen.

At least once somebody told Donald Trump he'd been yelling at football players instead of doing anything about three and a half million Americans hit by a hurricane. But after that, he was aces, because the official death toll when he visited was only 16, which was way less than the nearly 2,000 who'd died in New Orleans during and after Katrina:

Sixteen people, certified — 16 people versus in the thousands. You can be very proud of all of your people, all of our people working together. Sixteen versus literally thousands of people.

So since the actual death toll from Maria seems to be nearly triple Katrina's, surely Trump will at least revise his grade to an A-Minus, don't you think? Pfft -- long time ago, who cares, and Harvard's a bunch of liberal snobs who never voted for him anyway.

Don’t take for granted that the institutions you love will always be there, like democracy, a working government, and Wonkette. Click to preserve at least one of them!