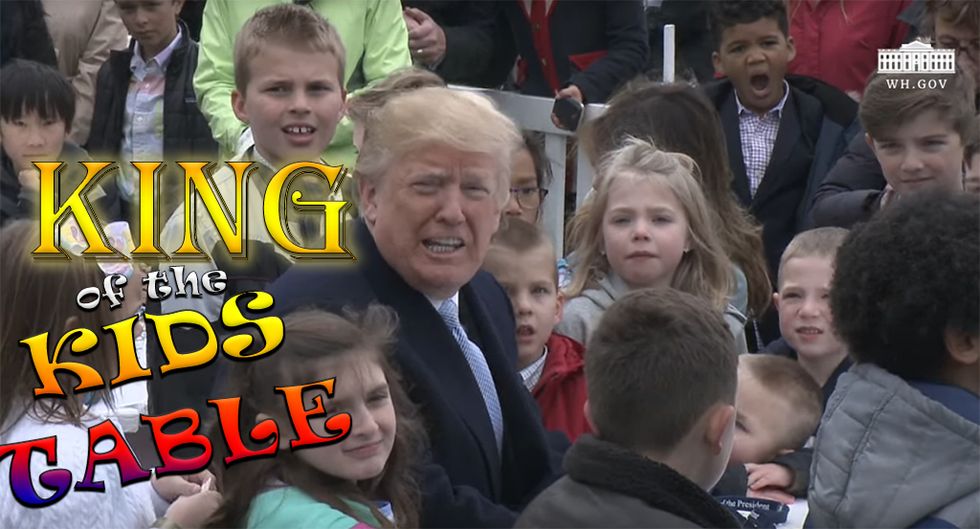 Robert Mueller has been given the greenlight to dig up dirt on Paul Manafort's Russian and Ukrainian fuckery. [Archive]

Trump's White House isn't denying that Trump invited Vladimir Putin to swing by for a sleepover when he congratulated the dictator for stealing his last election.

Jill McCabe is responding to threats and criticism that accuse her and her husband of being conspirators in an elaborate plot to ... whatever it is Trump thinks they did.

A GoFundMe page for Andrew McCabe's legal defense fund has stopped accepting donations after reaching over $530,000. In a statement, McCabe thanked people for the outpouring of support, and stated the money will be put towards "taking a stand against the unfair way [he has] been treated."

In responding to criticisms that she's the leakiest faucet inside Trump's White House, Kellyanne Conway said, "Leakers get great press. And one day...I will have my say. So that will be very, very fascinating. I will have my say."

Fearing a backlash from his base after failing to get Mexico to pay for his stupid wall, Trump's Justice Department is imposing quotas on immigration courts in order to speed up deportation processes. [Archive]

The DHS Office on Women's Health scrubbed information on breast cancer and reproductive health, as well as insurance info for poors who use Obamacare. Have you tried NOT getting cancer?

The EPA is moving to scrap Obama-era fuel efficiency and emissions standards after auto makers bitched about the lagging sales of gas-guzzling suburban war machines.

The guy who helped create the Trump tax cuts (for the super-rich) has been tapped to be Steve Mnuchin's number two at the Treasury Department.

Trump's lawyers, desperate to keep Stormy Daniels from getting up on the witness stand, are attempting to enforce arbitration clauses in their ALLEGED hush money contract.

Lawyers for Trump are also appealing a ruling by a state Supreme Court Justice that will allow a defamation suit by Summer Zervos to move ahead.

Someone in Trump's White House declared yesterday to be World Autism Awareness Day, even though Trump is an anti-vaxxer with a tinfoil toupée.

Scott Pruitt's temporary townhouse was the site of multiple GOP fundraisers while Pruitt was living there, but nobody invited Pruitt to the money parties while he lived there, so it's all good.

Trump's White House is investigating whether Scott Pruitt engaged in any kind of less-than-legal fuckery while living dirt cheap in the home of an energy lobbyist.

John Kelly WAS mulling over "You're Fired"-ing Scott Pruitt, but Pruitt's been such a loyal and effective minion that Trump wants to keep him around.

The FEC is poking around Ryan Zinke's former PAC after it failed to disclose $600,000 in small, nameless contributions last year -- contributions that seem to have been funneled into DC-based hatchet men.

A relatively obscure Florida man has oozed into the K Street swamp and bubbled up to become one of the most powerful lobbyists thanks to his 30 year connection to Trump.

Loudmouth attention whore Rep. Matt Gaetz brushed off the curious brown smudges from his nose and told Politico all about how Obama is the Soviet Satan, and how Trump is Orange Julius Caesar.

Democrats are rebuilding their political operations from the ground up by funding tech start-ups that focus on voter participation, online polling, activism, advertising and mobilization.

Connecticut Democratic Rep. Elizabeth Esty won't run for reelection. Rep. Esty is facing criticism for protecting a staffer accused of sexual assault and harassment while she simultaneously called for the heads of fellow Congressmen.

The Justice Department is suing California over a law that restricts Uncle Sam from buying and selling public land that could hurt state interests.

The Interior Department is rethinking plans to more than double the fees for entry into national parks after the public commenting system was inundated with people complaining that Ryan Zinke is a grifty asshole.

Teachers in multiple states are protesting against pathetically low wages and a lack of benefits, and they've adopted Twisted Sister tunes as their anthem. Rock.

The State Department is reporting a steep decline in the number of foreign visas granted to Not Americans, but it's unclear if people are avoiding the US, or if the US is telling people to get lost.

The United Nations is getting ready for John Bolton by bringing in a former Obama official to serve as the the undersecretary general for Political Affairs, but Not America is justifiably bitchy and skeptical.

A kid who ran to the cops in fear of MS-13 will be deported to El Salvador...where MS-13 reigns supreme. Thanks, Trump.

A new study has found that more than a third of college students don't get enough food and lack secure housing. The report cites the rising cost of college and the growing enrollment of low-income students, coupled with many schools' refusal to admit the problem.

There's growing concern in Washington's business and power circles that Trump's tweets are screwing up the tech sector, opening up deep wounds in the economy.

And here's your morning Nice Time! A ring-tailed possum couple!

We're 100% ad-free and reader-supported, and we could really use an extra cup of coffee right now!