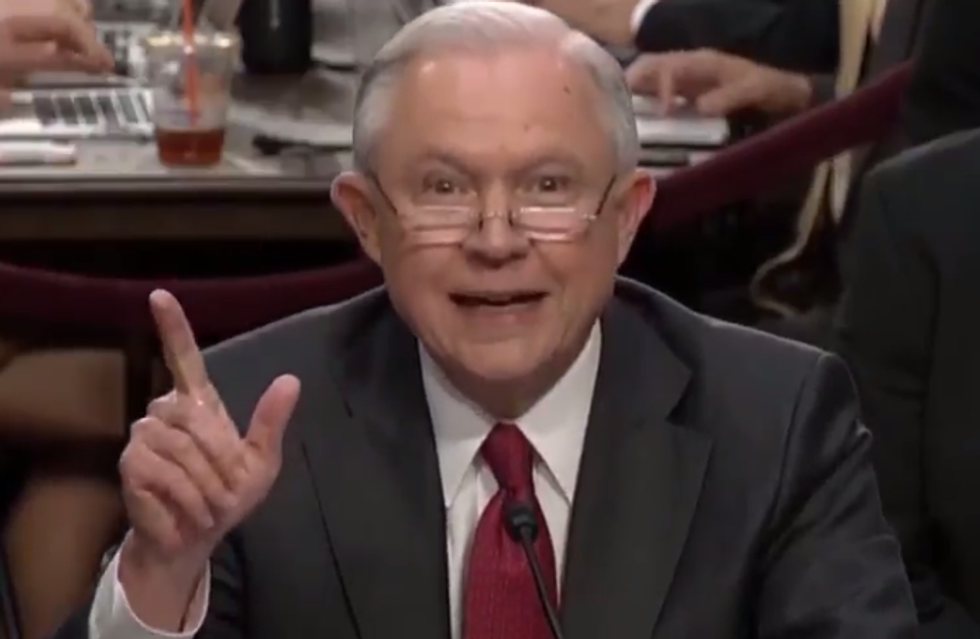 How the hell did we end up on the same team as Jeff Sessions? Time to start buying those freeze-dried slop buckets from Jim Bakker -- clearly the Apocalypse is nigh! Because that racist elf's ability to absorb constant abuse from the Horrible Boss in Chief is the only thing protecting the Russia investigation. And we never thought we'd say it, but ... STAY STRONG, JEFFBO!

See, no matter how much Donald Trump hates Jeff Sessions, and he hates him A LOT, he can't fire the AG. Chuck Grassley made it abundantly clear that the president's agenda is DOA in the Senate if he messes with Ol' Jeff. And firing Comey is how Trump got Robert Mueller in the first place. Even Trump has figured out that he's likely to wind up with a second Special Counsel if he kicks Sessions to the curb.

"There's no doubt he's complained about him," Giuliani, who is currently serving as Trump's lawyer, told reporters on Wednesday. "There's no doubt he has some, some grievances. I don't know if they've aired them out yet, but he's not going to fire him before this is over, nor do I think he should."

But if Sessions quits, well then it's all good! So Trump has settled on a strategy of kicking the Attorney General in the nuts several times a day to see if he can force him to resign. Lucky Melania is MIA, or she'd be pissed! You know that FLOTUS simply can't abide bullying.

And where the Chickenshit goes, the Fox will follow.

#Betrayal- @GreggJarrett: The feckless AG Sessions has no skills. His recusal from the Russia probe was a severe & serious betrayal of President @realDonaldTrump. #MAGA#TrumpTrain#DTS#Dobbspic.twitter.com/ATEcZK7R6J

Yes, that there is very good journalisming! Who else would like to make some shit up about federal law? You know the president is always watching!

“The recusal of Jeff Sessions was an unforced betrayal of the President of the United States.” JOE DIGENOVA, former U.S. Attorney.

LOL! Remember that time when Donald Trump couldn't get any reputable lawyers to work for him, so he announced that he'd hired Joe DiGenova and his loony wife Victoria Toensing? Except after he met with them, even Donald Trump was like, Nah, bro! This guy looks like a hobo trying to get into free wing night at a dive bar on the outskirts of town?

And speaking of good hair ...

Rep.Trey Gowdy, “I don’t think so, I think what the President is doing is expressing frustration that Attorney General Sessions should have shared these reasons for recusal before he took the job, not afterward. If I were the President and I picked someone to be the country’s....

....chief law enforcement officer, and they told me later, ‘oh by the way I’m not going to be able to participate in the most important case in the office, I would be frustrated too...and that’s how I read that - Senator Sessions, why didn’t you tell me before I picked you.....

....There are lots of really good lawyers in the country, he could have picked somebody else!” And I wish I did!

(Why would a guy who tweets fifty times a day learn how to thread tweets, right?)

Okay, clearly it's time for a lawsplainer on this newest wingnut nonsense. We know the fuckwits aren't reading us, but at least you'll all be able to jump in with a, "Well, actually!" when your asshole brother-in-law starts that shit about Jeff Sessions being SO MEAN to Donald Trump.

Uh, not. 28 cfr 45.2 MANDATES that the attorney general recuse from any investigation of a campaign if he was a part of the campaign. When the investigation ripened after Sessions confirmation, I and others demanded recusal —and Sessions property complied https://t.co/5nB0XWhlhJhttps://t.co/9X0BjgsZNd

What exactly does that statute say?

(a) Unless authorized under paragraph (b) of this section, no employee shall participate in a criminal investigation or prosecution if he has a personal or political relationship with:

(1) Any person or organization substantially involved in the conduct that is the subject of the investigation or prosecution; or

(2) Any person or organization which he knows has a specific and substantial interest that would be directly affected by the outcome of the investigation or prosecution.

Oh, so Jeff Sessions, who was the first senator to endorse Trump, worked actively on his campaign, played a prominent role in the transition, and is a potential witness to criminal conduct during the campaign, transition, and post-inauguration, is legally obligated to recuse? That's probably why the Justice Department's own lawyers told him in no uncertain terms that he had no choice! Gosh, no wonder DOJ officials told the Times that they were appalled when White House Counsel Don McGahn urged Sessions to un-recuse!

Mr. Trump immediately recognized the potential effect of a recusal. He had his White House counsel, Donald F. McGahn II, lobby Mr. Sessions to retain oversight of the inquiry.

To Justice Department officials close to Mr. Sessions, the request by the president made through Mr. McGahn was inappropriate, particularly because it was clear to them that Mr. Sessions had to step aside.

Joe DiGenova knows damn well that Sessions had no choice but to recuse. But DiGenova's a hack who will say absolutely any stupid shit to prop up the president. That train is never late!

Gowdy, however, has taken a slightly different tack. He concedes that Sessions was obliged to recuse, but he argues that the Attorney General should have anticipated the investigation and "should have shared these reasons for recusal before he took the job, not afterward."

Is Trey Gowdy saying that Sessions should have known from his work on the Trump campaign that it was NO COLLUSION! NO COLLUSION! OKAY, IT WAS ALL THE COLLUSION? Or is he suggesting that Jeff Sessions, being a leprechaun, should have used his magic divining stick to look into the future and see that the campaign would come under investigation for making sexxxytimes with allllll the Russians? Are we really going with that? Jeff Sessions should have refused the job because he is a magical Lucky Charms creature who knew damn well that Trump was guilty as sin?

Trey, let's try to put this in language you'll understand -- That dog won't hunt! Either you're as confused as a fart in a fan factory, or you're talking with your tongue out of your shoe! You could make a preacher cuss telling lies like that!

Did we do that Southern talk right? Because up here in Yankeeland we'd say YOU'RE FULL OF SHIT. Which won't get you RT'd by That Idiot, or even make you many friends at a barbecue, but has the virtue of being true.

Please click here to fund our lawsplainers! You know you wanna!