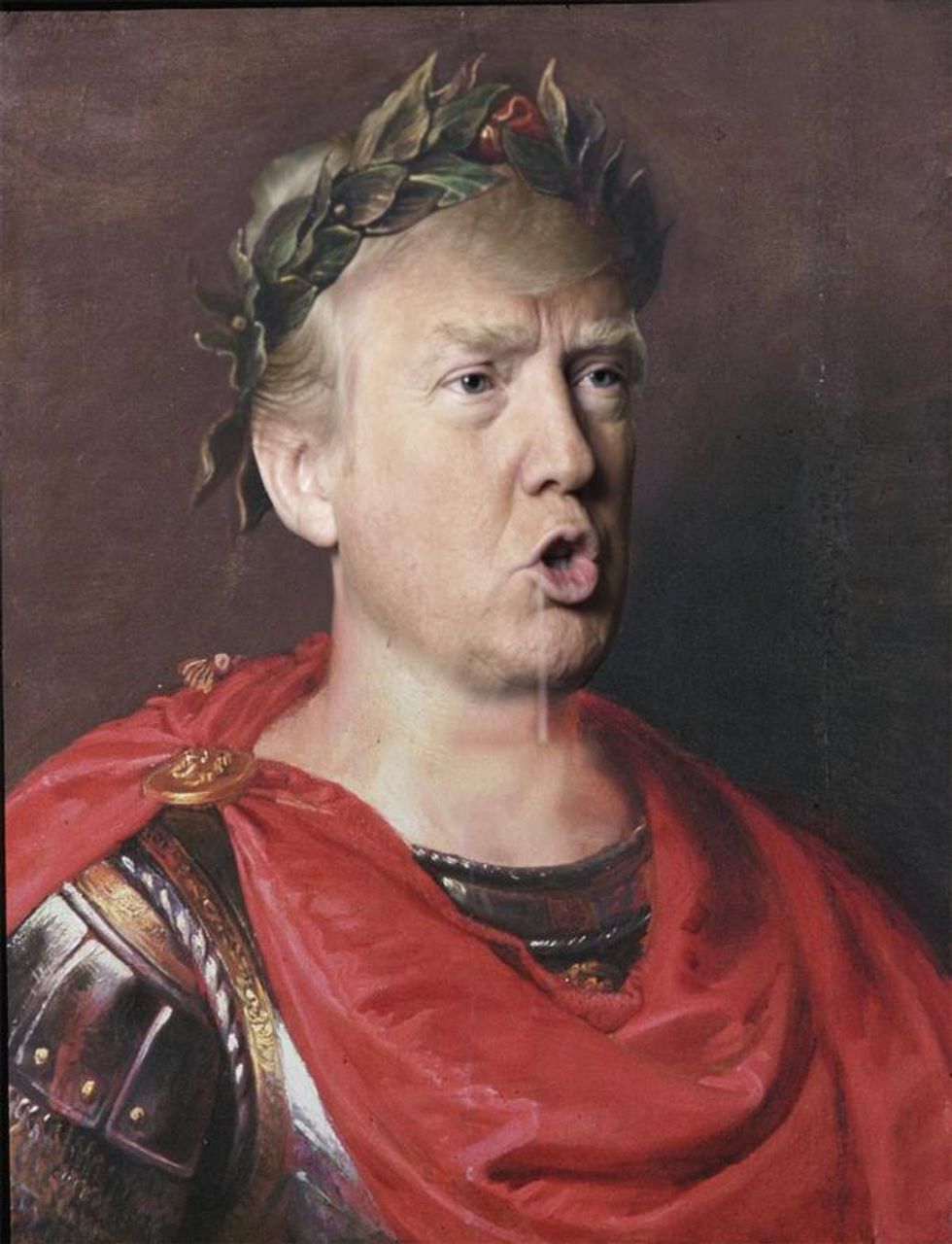 Gaul is supposed to be a big deal, but it's nothing. Very disappointing. Terrible hotels.

Now that Donald Trump has declared himself the Republican Nominee, High Pooh-Bah, and All-Father of the World (Dilute! Dilute!), it's time for him to start Acting Presidential, so he gave a Very Serious Foreign Policy Address today. How serious was the speech? A PBS preview informed us the whole spectacle would be

dressed with the trappings of gravitas. It will be held at Washington’s stately Mayflower Hotel (after a last-minute location change blamed on “overwhelming interest”) and will be presided over by Zalmay Khalilzad, a former U.S. ambassador to Afghanistan and Iraq, according to the campaign. Trump is expected to use a teleprompter, despite the fact that he has mercilessly mocked his rivals for doing the same, declaring at one point: “If you’re running for president you shouldn’t be allowed to use a teleprompter.”

Ooh, maybe this was Trump's much-anticipated "exit strategy"? Now that he's used a teleprompter, he'll have no choice but to drop out, to be true to his word, because he is a man of honor? Sadly, it was not to be.

We also got this important advance expectations-lowering advisory:

That was from Walid Phares, one of Trump's weird foreign policy advisor dudes, but not the one who's worried Montana Native Americans are going to sell nukes to Turkey. Phares clarified:

Of Trump's plans for combatting the Islamic States specifically, Phares said, "He's not going to say 'we're going to send three brigades to do the job.' No. He's going to confirm the principle that ISIS should be destroyed so that the other political settlements can work."

Gotta be able to surprise the bastards, by, say, invading Denmark when they least expect it.

Trump began by starting the festivities a half hour late, just like a real president. He had some really cool introductory phrases about shaking the rust off American foreign policy, which has been nothing but sheer chaos under Barack Obama. "'America First' will be the major and overriding theme of my presidency," he said. He briefly reviewed the entire history of American foreign policy, which began with America whipping the Nazis and Japanese in World War II, and culminated in Ronald Reagan making Gorbachev tear down the Berlin Wall. Since then, everything has been terrible, and Barack Obama created ISIS by being so weak.

Like any good freshman comp student, he presented a five-point essay on what currently sucks about American foreign policy. Or as Wonket emerita Ana Marie Cox tweeted:

Trump then explained 1) We're trying to do too much around the world, and we're overextended 2) we'll make our allies pay their fair share for defense. Trump got through these pretty quickly.

Outline Point Three: Our allies aren't sure we can be depended upon. A large portion of this section dealt with how Iran is really, really bad, and the Iran nuclear deal was terrible -- which is one crappy example of stuff that makes our allies nervous, seeing as how we negotiated the treaty with our allies. Trump even bitched about the terrible treatment of our 10 sailors who were briefly detained by Iran and then released.

Paragraph IV focused on how our rivals don't respect us, and everyone around the world laughs at us, because of the whole weakness thing. Trump recited a litany of terrible humiliations America has suffered under Barack Obama, who wasn't even kissed by the Saudi King when he visited there. North Korea is totally out of control, and we aren't making China do what we want it to. We bet that will go over really well with the Chinese.

Point 5: America no longer has a coherent foreign policy. Good lord, we're a mess. We've totally messed up the Middle East, and let's mention ISIS again, plus Barack Obama refuses to say the magic words "Radical Islamic Terrorism," not even in reference to Syrian refugee children. Oh, yes, and Benghazi, Benghazi, Benghazi. We need to be blockading and bombing pretty much everywhere.

Trump then promised a coherent foreign policy, which will put American interests first. And by golly, he had a simple four-point plan there, too:

Goal one: Beat Radical Islam. Work with our allies in the Islamic world (whose citizens we won't allow to come to America). But no more free ride: the countries we help need to appreciate us, damn it.

As part of that outreach to the moderate Islamics, he'll stop Muslim immigration and look very closely at all the Muslims already in America, which should win all sorts of love. Trump warned ISIS that their days are numbered, but he won't tell them when or how, because he has some great surprises in store for them. Maybe he'll leave a flaming bag of dog poop on their door, ring the bell, and run away. There's simply no telling.

Goal Two: Rebuild the military and the economy, by spending all the money on the military, or as Trump put it, going briefly off-text, the military must be "funded beautifully." To illustrate how badly Barack Obama has let our military decline, Trump pointed out all branches of our armed services are much smaller today than in 1991, when there was some kind of Cold War going on. Imagine that! Also, he pledged the military will no longer have to worry about global warming, because it is not real, even if the Pentagon thinks it is. (Some liberal must have made them say that.)

Also, we'll create jobs and make America great again, with the cyber-weapons and the research and development of weapons systems, and 3-D printing, plus also funding the VA gooder, and saving money. How do you like that coherence?

Goal the Last: Develop a foreign policy based on American interests. He mentioned terrorist attacks in Kenya and Tanzania, which he pronounced "tan-ZANE-ia" like a good American would. But where was America? Playing footsie with China.

Trump also said we need to have closer relations with China and Russia, dealing from a position of strength, by fighting our common enemy, radical Islam. We also need to become friendlier with China, by being tough on them, because the Heathen Chinee only respects strength. Trump will learn them to respect us, damn it.

As for our allies, Trump will tell them the free ride is over, and they need to pay their own way. "If America fights, we will only fight to win." Because apparently most of our military action since Iraq was aimed at losing, and that had nothing to do with the unrealistic expectations of the Bush administration, which was terrific at beating the Iraqi army, and utterly fucked up the peace. Notably, Trump never mentioned George W. Bush by name.

Trump repeated, once more, his evidence-free claim that he always opposed the Iraq invasion, and pined over our failure to take all the oil.

Oh, yes, and also he wants to promote Western Civilization, even if he has to rain it down on dirty foreigners from B-52s. Get ready to hear this line repeated a lot in future stump speeches, because you could tell he really loved it: "We will no longer surrender this country, or its people, to the false song of globalism."

All in all, it was a bunch of lines from other Trump speeches forced into an outline by some poor speechwriter. We learned nothing new, except that when a text of his usual blather is shoved in front of him, he can deliver it with only minimal digressions into calling things great and wonderful. Also, by some miracle, the only wall he mentioned was the Berlin one.

Get ready to start hearing about how presidential this fucking idiot is, at least until the next rally where he pulls down his pants, waves his dick around, and encourages the audience to beat the crap out of a protester.