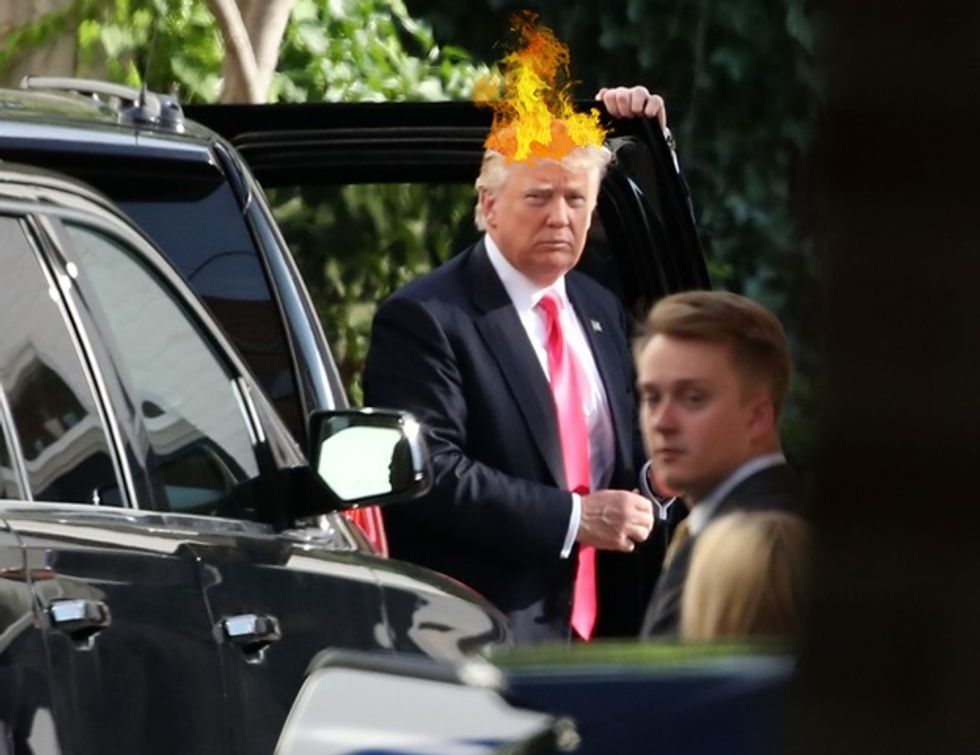 Huh. Usually it's the pants.

Donald Trump visited Capitol Hill Thursday and met with Republican members of the House and Senate. The House meeting went just great, according to Speaker Paul Ryan, who somehow managed to avoid the phrase "rainbow party" in describing his caucus's reception of the presumptive nominee. The Senate meeting involved less tongue and more teeth, according to "two Republican officials with direct knowledge of the exchanges" who gave the inside dirt to the Washington Post:

Trump’s most tense exchange was with Sen. Jeff Flake (R-Ariz.), who has been vocal in his concerns about the business mogul’s candidacy, especially his rhetoric and policies on immigration that the senator argues alienate many Latino voters and others in Arizona.

When Flake stood up and introduced himself, Trump told him, “You’ve been very critical of me.”

“Yes, I’m the other senator from Arizona — the one who didn’t get captured — and I want to talk to you about statements like that,” Flake responded[.]

Goddamnit, Sen. Flake, don't you go and make us like you. Flake assured Trump that he wasn't part of the "Never Trump" movement, but also said he wasn't entirely ready to give his unqualified backing. Oh, how the fake fur flew!

Trump said at the meeting that he has yet to attack Flake hard but threatened to begin doing so. Flake stood up to Trump by urging him to stop attacking Mexicans. Trump predicted that Flake would lose his reelection, at which point Flake informed Trump that he was not on the ballot this year, the sources said.

Credit where it's due: That's how you manage the ferret-topped wankstain.

Illinois Sen. Mark Kirk has become the first Republican to formally withdraw his earlier statement that he would support Donald Trump. Other rats are still reportedly waiting for reports on the ship's buoyancy.

Trump also reportedly aired his grievances about Illinois Sen. Mark Kirk, who wasn't even at the meeting, but Trump apparently felt he needed to let Republican senators know who's boss (it is the senators, actually). Trump was very, very disappointed with Kirk for undorsing him following Trump's racist comments about the judge in one of his Trump University lawsuits.

Characterizing Kirk as a loser, Trump vowed that he would carry Illinois in the general election even though the state traditionally has been solidly Democratic in presidential contests.

Unfortunately, we don't have any further details on Trump's comments about Sen. Kirk, who uses a wheelchair since a stroke a few years back. We'll assume Trump didn't do any hilarious pantomimes of Kirk's disability, since we would have heard about that by now. So there's your pivot to "presidential" for the day -- enjoy it.

The walking bundle of self-absorption and resentment also criticized Nebraska Sen. Ben Sasse, who has vocally yearned for a third-party candidate; again, we don't have any details on what Trump said about Sasse, although Sasse's office was generous enough to offer a statement about his perspective on the meeting:

“Senator Sasse went to today’s meeting ready to listen. Senator Sasse introduced himself to Mr. Trump, and the two had a gracious exchange,” said James Wegmann, the senator’s spokesman. “Mr. Sasse continues to believe that our country is in a bad place and, with these two candidates, this election remains a dumpster fire. Nothing has changed.”

Before meeting with Senate Republicans, Trump was warmly received by House Republicans, many of whom we'll assume gargled afterward with Scope and/or scotch. Paul Ryan, his face frozen in a rictus of what was almost certainly meant to be a smile, was over the moon, really he was:

“What I thought was especially helpful today was our members just got access and got to ask their questions and talk about their issues,” said House Speaker Paul D. Ryan (R-Wis.). “I thought he did a great job engaging with our members, and I think our members appreciated it.” [...]

“We clearly have a presumptive nominee who wants to work with us on moving this agenda forward,” Ryan said.

Ryan then stated in a curiously robotic monotone, "It was much better than Cats. I want to meet with Mr. Trump again and again."

Also, during the meeting with senators, Trump

claimed that he had inside intelligence about Hillary Clinton’s vetting process for Supreme Court vacancies and that he knew the names of two people the presumptive Democratic nominee is considering nominating, two Republican officials said. But Trump would not reveal those names.

He did not specify whether it was both of the Two Corinthians, or just one. We can hardly wait to find out what cockamamie "intelligence" he comes up with on this one. Maybe he'll say Hillary plans to nominate Bill Ayers and Gary Busey.

Not all the House members fell to their knees in praise of Trump, either. Illinois Rep. Adam Kinzinger described his remarks to the House meeting as “a lot of stream of consciousness,” somewhat similar to his patter at rallies but “less cheery.” And you'll never guess which of Trump's current obsessions came up in the meeting!

He said Trump brought up his recent comments about Saddam Hussein “in the context of how unfair the media has been to him.” Trump has praised the former Iraqi dictator for being “so good” at killing terrorists while adding that is all he thinks was good about a “bad guy, really bad guy.”

Kinzinger called Trump’s previous comments about Hussein “disgusting and despicable.” He said it was “awkward” to hear the GOP nominee defend his remarks in the room.

Donald Trump Airs His Grievances: The Media (Who Are Probably Jooz)

Donald Trump would like to tell you a thing he knows about the Jews.

Miraculously, Trump's other current hobbyhorse, the indisputable fact that his Star of David tweet was not a Star of David tweet, didn't come up at either meeting, probably thanks to warnings from the Senate's Zionist Illuminati paymasters.