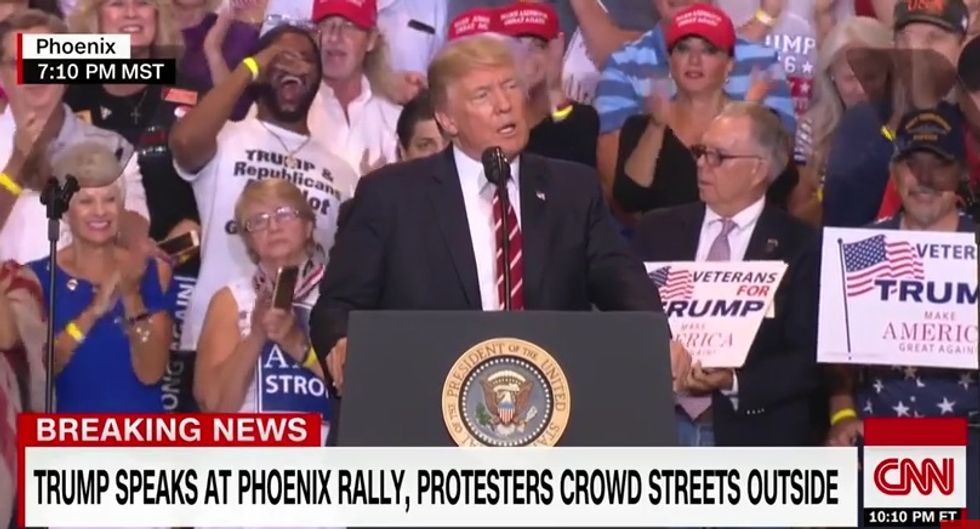 Sounded just as bad in the original German

We honestly aren't sure whether Donald Trump was more unhinged than usual at his rally in Phoenix Tuesday night, or if we simply hadn't seen him turn the crazy up to Eleven like that since the 2016 campaign. Tuesday's appearance was an actual campaign rally, paid for by Trump's 2020 campaign committee. And Donald Trump was presidential as fuck, all the way through explaining that reporters make everything up, accusing the media of not accurately reporting his comments on Charlottesville while he actually misquoted himself, pledging to pardon former sheriff Joe Arpaio, and hinting he might shut down the government if the U.S. Congress doesn't appropriate the money to build a border wall that he'd promised last year Mexico would pay for. While he was at it, he told the crowd the Secret Service had assured him only a few people were outside the convention center protesting, which was accurate enough if you call thousands "a few."

We'd offer an analysis of the substantial parts of the speech had there been any. There weren't, so we'll offer a couple of summations from the Twitter machine. Republican strategist Rick Wilson described it thusly:

But this is also every bit as accurate:

Donald Trump just can't seem to say who might have been responsible for the murder in Charlottesville. Maybe radical Islam.

In one of the rally's many highlights, Trump spent several minutes reading parts of his statements on Charlottesville, noting that he'd condemned "hatred and bigotry and violence" but conveniently leaving out the part where he condemned the bigotry, hatred, and violence coming "on many sides -- on many sides." He also made no mention of his later insistence that there were "many fine people" marching with the KKK and neo-Nazis in Charlottesville. Trump went on to explain reporters simply don't love America. In a great disappointment to the crowd, he did not actually direct the beating of a reporter onstage. Give him time.

MSNBC's Lawrence O'Donnell eventually just gave up on the live coverage of the speech, and cut away to talk with his studio panel about the lies and madness:

Shortly after that, O'Donnell briefly re-joined the rally; Trump was talking about what a terrific apartment he has in Trump Tower, plus he gets to live in the White House, too. O'Donnell cut away to the studio again, saying, "Clearly there is nothing worth following in what he's talking about," and then only went back to the rally when Trump dropped his maybe-newsworthy comments about Joe Arpaio and shutting down the government. O'Donnell later explained on Twitter,

At another point, Trump accused CNN of turning off its cameras because the lying media wouldn't cover his speech. Viewers on CNN saw the entire rant.

Trump falsely says media turning off the cameras. “CNN does not want its falling viewership to watch what I’m saying," he says—live on CNN. pic.twitter.com/br3KOh21WE

'America's Toughest Sheriff' may be headed for a federal prison, where he can expect better treatment than at his own jail.

On the possibility of a pardon for Arpaio, Trump got cheers for saying, yeah, sure, what's a little criminal contempt of a federal judge's order to stop discriminating against Latinos?

So was Sheriff Joe convicted for doing his job? You know what, I’ll make a prediction: I think he’s going to be just fine, okay? But I won’t do it tonight because I don’t want to cause any controversy. But Sheriff Joe should feel good.

Trump also called for an end to the filibuster rule in the Senate, blamed "obstructionist Democrats" for refusing to fund the border wall that Mexico will definitely pay for -- saying that he'll shut down the government if it's not funded -- and said he'll probably just give up on negotiations to reform NAFTA, so maybe he'll just pull out of the trade agreement altogether.

Oh, and let's not forget this bit of actual science, from the mind of the president of the United States:

We've ended the war on beautiful, clean coal, and it's just been announced that a second, brand-new coal mine, where they're going to take out clean coal -- meaning, they're taking out coal, they're going to clean it -- is opening in the state of Pennsylvania.

This is the man with the nuclear codes.

Trump also took the opportunity to slag on Arizona's two senators, John McCain and Jeff Flake, but very cleverly refused to say their names, because that way, he could make a big deal about how he was following the advice "they" -- his advisors? the lying media? the voices in his head? -- gave him to not mention their names:

There's nothing at all weird in Trump's repeatedly shouting "One vote!" -- McCain's apparently treasonous refusal to pass a sham of an Obamacare repeal -- and then going on with his very presidential comments:

“They all said, ‘Mr. President, your speech was so good last night, please, please Mr. President, don’t mention any names.’ So I won’t. I won’t,” said Trump, perhaps referring to his advisers or allies.

“One vote away — I will not mention any names. Very presidential, isn’t it?”

Of Flake, whom Trump cleverly didn't name either, he said,

On NPR this morning, Republican strategist Michael Steel said the stunt was "almost like kids in the back seat of a car: 'I'm not touching you! I'm not touching you!'" and noted that maybe if Trump wants to pass anything in the Senate, it might be useful not to attack senators from his own party.

Aw, but what fun would that be? It was a big night for Donald and his id. Don't go spoiling it with details about how legislation gets passed. We'd hate for him to actually figure out how to do that.

Yr Wonkette is supported by reader contributions. Please click the "Donate" linky or you'll have to clean a lot of coal.