Donald Trump Knows Who Gets Yooge, Classy Pussy, Tucker Carlson, And It Is Donald Trump

Dear Christ help us, Tucker Carlson has written a think-piece for Politico in which he sermonizes to "Washington Republicans" -- you know, the bad, Establishment kind, not the honest decent folk who read the Daily Caller -- about how Donald Trump could teach them a thing or two "if only they stopped posturing long enough to watch carefully." It's the usual "Trump is here because Republicans failed to live up to True Conservative Principles and also Trump speaks Honest Truths" crap that you can find nearly anywhere, and we say the hell with it. But wowie, does it ever start off with a lovely Trumpian anecdote that sounds completely true -- for all we know, it might be among the most honest things Tucker Carlson has ever said.

According to Carlson, some 15 years ago, he "said something nasty on CNN about Donald Trump’s hair," which would have been unremarkable considering that hair jokes were the default opening for any discussion of the short-fingered vulgarian even then. In a moment of Nabokovian honesty, Carlson admits he doesn't remember the context, "assuming there was one," but the point of the story is that Trump saw it and left an answering machine message for Carlson, the only available option given that Twitter was still years away:

“It’s true you have better hair than I do,” Trump said matter-of-factly. “But I get more pussy than you do.” Click.

At the time, I’d never met Trump and I remember feeling amused but also surprised he’d say something like that. Now the pattern seems entirely familiar. The message had all the hallmarks of a Trump attack: shocking, vulgar and indisputably true.

It's rare that we're ever inclined to give credit to Tucker Carlson, but his admission that he couldn't get no girl reaction in the early 2000s was the journalistically responsible thing to do. It really lends him gravitas, which is generally the only way he gets any of that, too.

As of yet, Mr. "I Love The Bible So Many Corinthians Much" hasn't taken to the Tweetosphere to reply to Carlson's piece about how many pieces the two got 15 years ago. We figure he can simultaneously insist that it's merely proof of how much he loves women (at least the non-bleedy kind) and perhaps someone can clue him in about that "Christians aren't perfect, just forgiven" bumper sticker, a fine point of Christian theology that Trump may not have encountered yet in his Walk with the Lord. He's been spending his time Friday congratulating America on loving him so much (for the Vets!) and reposting an ineptly-photoshopped picture of "Mygan Kelly" hanging around with a scary Saudi guy who used to own 6% of Fox News, but with whom she's probably never been in the same building: 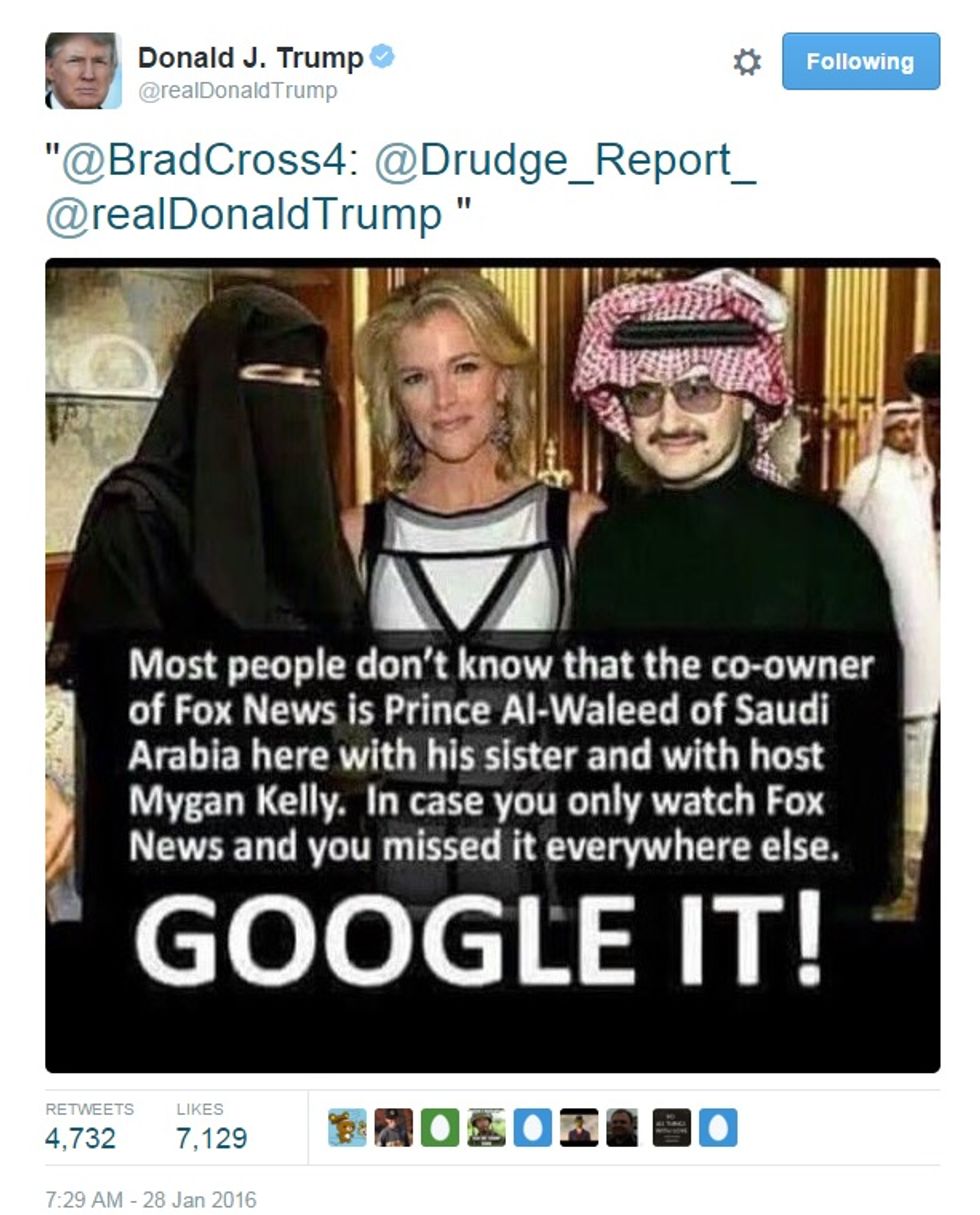 Still, congratulations to Donald Trump for having the guts to brag about his Big Pussy. Just imagine how much better Tucker Carlson might have done with the ladies if only he'd had a really good penis pump.

Donald Trump's Got A Fever, And The Only Prescription Is MORE GOLF

How's Your Kid's Online Schooling Going? Well, You're Reading This So You Have Internet

Trump: 10 Million New Jobless Will Get 'Something Much Better Than Obamacare'. Someday. When He Invents It.