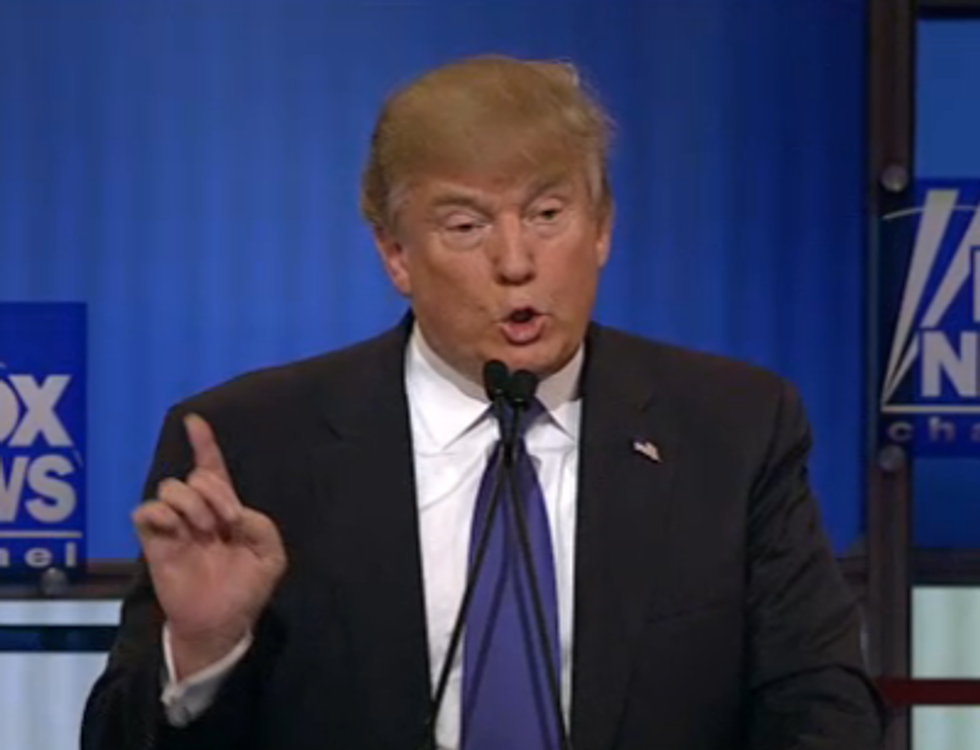 Yooge cock or your money back

Thursday night's Republican debate among four adult men who want to be leaders of the free world delivered all the seriousness and gravitas you'd expect from the GOP. And because we know said free world leader must, above all else, be packing a sufficiently sized bit of man parts in his pants, frontrunner Donald Trump guaranteed -- guaranteed, my friends, and you know that a Trump guarantee is as good as the gold plating on the toilet in which he dumps his digested business -- that he's got what it takes to be president.

[Marco Rubio] hit my hands. Nobody has ever hit my hands. I've never heard of this one. Look at those hands. Are they small hands? And he referred to my hands -- if they're small, something else must be small. I can guarantee you there's no problem. I guarantee it.

Naturally, this promise was met with wild enthusiastic cheering and applause from the NO HOMO audience, which was very excited to know Trump's penis is just the right size for the job. Whew. What a relief. We wouldn't want to lose sleep at night over whether the president of the United States has a big enough cock.

However, it is our ethics-in-journalism duty to fact-check Donald Trump's boastful claim. You'll be shocked and amazed to know it comes up short:

Just to drive him a little bit crazy, I took to referring to him as a “short-fingered vulgarian” in the pages of Spy magazine. That was more than a quarter of a century ago. To this day, I receive the occasional envelope from Trump. There is always a photo of him—generally a tear sheet from a magazine. On all of them he has circled his hand in gold Sharpie in a valiant effort to highlight the length of his fingers. I almost feel sorry for the poor fellow because, to me, the fingers still look abnormally stubby. The most recent offering arrived earlier this year, before his decision to go after the Republican presidential nomination. Like the other packages, this one included a circled hand and the words, also written in gold Sharpie: “See, not so short!”

Assuming Trump's guarantee is true -- and we have no reason to think that it is -- guess that means Mitt Romney, and any other Republican who dares to speak against him as he bullies his way toward the GOP nomination, is going to have to work on his gag reflex.