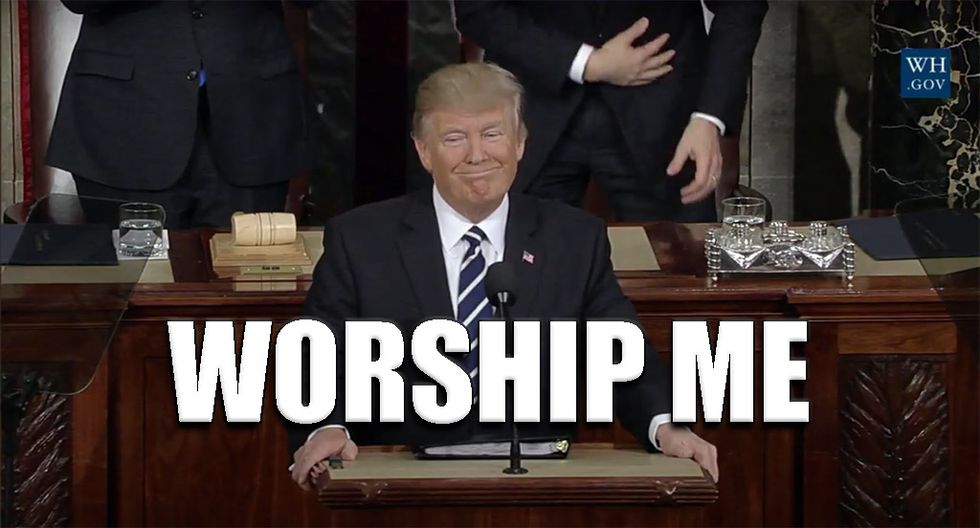 It's what he wants

Donald Trump has now made it through the fake and stupid 100-day benchmark, having accomplished basically nothing in his young presidency, and he spent his weekend showing us his true colors. He read a poem at his Nuremberg rally in Pennsylvania about how refugees and immigrants are vicious snakes who will bite us and kill us. He's invited genocidal freak Rodrigo Duterte, president of the Philippines, to come Pussgrab 'n' Chill at the White House. Oh, and White House Chief of Staff Reince Priebus went on TV Sunday morning to say the regime is definitely looking into ways to gut the First Amendment, so people won't be allowed to say things that hurt the president's feelings. U-S-A! U-S-A!

But wait, did we just say the regime wants to gut the FIRST AMENDMENT? Yes, we did!

It was in an interview with ABC's Jonathan Karl, and thanks to liberal troublemaker Josh Marshall from Talking Points Memo, who is always saying mean stuff about Dear Leader, we have the transcript:

KARL: I want to ask you about two things the President has said on related issues. First of all, there was what he said about opening up the libel laws. Tweeting “the failing New York Times has disgraced the media world. Gotten me wrong for two solid years. Change the libel laws?” That would require, as I understand it, a constitutional amendment. Is he really going to pursue that? Is that something he wants to pursue?

PRIEBUS: I think it’s something that we’ve looked at. And how that gets executed or whether that goes anywhere is a different story. But when you have articles out there that have no basis or fact and we’re sitting here on 24/7 cable companies writing stories about constant contacts with Russia and all these other matters—

KARL: So you think the President should be able to sue the New York Times for stories he doesn’t like?

PRIEBUS: Here’s what I think. I think that ... newspapers and news agencies need to be more responsible with how they report the news. I am so tired ...

KARL: I don’t think anybody would disagree with that. It’s about whether or not the President should have a right to sue them.

PRIEBUS: And I already answered the question. I said this is something that is being looked at. But it’s something that as far as how it gets executed, where we go with it, that’s another issue.

Wow, that is breathtaking. We bolded the parts we found the most interesting. As Marshall notes, Priebus said TWICE that they're looking at ways to gut the First Amendment, so that Trump can punish people who write mean things about him. This is because Donald Trump is a thin-skinned pussy who is mentally and emotionally unequipped to be president of the United States.

We also think it's real funny that he mentions "constant contacts with Russia," as if the administration should be able to shut down press about what may end up being the biggest presidential scandal in U.S. history, something WAY bigger than Watergate, as Trump always said during the campaign when he was projecting his own corruption onto Hillary Clinton. We understand that it probably chaps Trump's ass real good every time a new story comes out about his creepy ties with Russia, but the news wouldn't be able to write that story if it didn't exist, so fuck you, Mr. President.

As Marshall notes, and as Jonathan Karl noted, changing the rules so it's illegal to say things that bring displeasure to the wannabe tinpot dictator in the Oval Office would require a Constitutional amendment, so take comfort that the process for doing that is a REALLY HEAVY LIFT. The Trump regime would have to rig elections all over the country WAY more than they (allegedly!) did in the 2016 election, to get the 2/3 majorities in Congress (or in the states, if they went the constitutional convention route) required to make that happen. (And that's assuming that all Republicans would just go along with it. We're skeptical.)

Also, pray tell, how would such an amendment read? Would the part about "abridging the freedom of speech, or of the press" be replaced with "It's all fun and games until Samantha Bee talks shit about the president's tiny hands or Rachel Maddow does an investigative report on Russia or Wonkette won't stop dunking on Trump with its constant jokes about puss-grabbing or Russian pee hookers"? We are just curious.

Anyway, we don't have much more to say about this, except for shit's fucked up, yo. Also, all of us alarmist liberals who have been sounding the alarm about how Trump literally wants to destroy everything that makes America good keep getting proven correct, don't we?