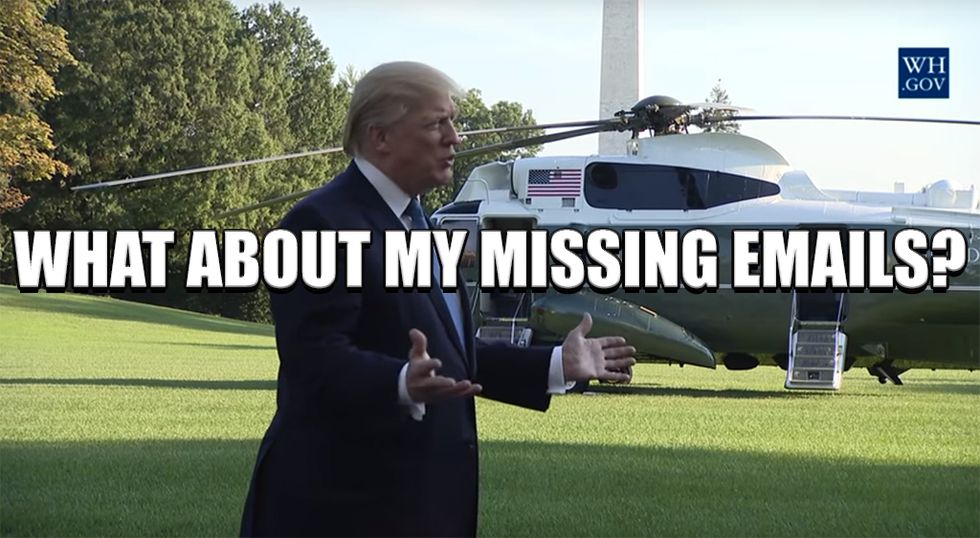 Happy Taco Tuesday, Wonketariat! There's just so much going on right now that we can hardly cover it all, but we're going to try! Here's some of the things we may be talking about today.

It certainly LOOKS like the undead son of zombie TrumpCare has been dealt a deathblow now that Collins has come out against it, but we've seen this movie before.

The rumor mill on the Hill says that Republicans are working on another plan that will allow them to bundle tax cuts for the super rich with yanking away healthcare for the poors. STAY VIGILANT!

Facebook is trying to defend itself from the coming shitstorm of legislation that seeks to curb-stomp its freedom to accept Rubles.

The FEC is trying to drag disclosure rules into the 21st century, and they're soliciting comments. Some ideas include a database of political ads, and banning automated (programmatic) ads. You know Zuckerberg is just going to cry about over this one.

MOAR senior Trumpkins are using their private email addresses to conduct government business. Once again, it's not the same as when Hillary Clinton murdered a million Internet kittens because the Trumpkins didn't know it was a crime. LOCK THEM UP!

Republicans want to investigate all the Trumpkins who used their own murder mail accounts, but we're confident this is just Trey Gowdy jerking himself off, as usual.

Rather than offer support, Trump decided to tell Puerto Rico to go fuck itself, ridiculing its massive debt (a debt that is the direct result of decades of pillaging from people abusing its status as a US territory).

Jeff Sessions will speak at Georgetown later today, and he's expected to start crying about the death of free speech at colleges. He'll probably come out draped in a Confederate flag and holding a tiki torch so all the banned protesters can't see him.

Ratfuck king Roger Stone will sit down with the House Intelligence Committee today where he'll lie about all his ratfucking during the 2016 election.

Alabama Senate candidate Roy Moore pulled out a gun on stage last night to show how hard he is in front the other gun fetishists. It's a cute little purse pea shooter; I'll bet it goes pew pew pew!

Former President Bannon was also at a Roy Moore rally where he told the crowd that people think they're "a pack of morons...nothing but rubes," and that "they have no interest at all," in what Alabamians are actually saying. He then told people to "praise and honor" Donald Trump.

Illinois Republican Governor Bruce Rauner has sided with Donald Trump in the great sportsball debate in a Hail Mary attempt to reconnect with his base in Not Chicago.

North Korea says it can shoot down our planes when they come close to their border, so that's nice.

There's a petition going around to "You're Fired" FCC Chairman Ajit Pai now that he's up for re-confirmation. YOU KNOW WHAT TO DO! (Sign the petition. He is the worst.)

Now the story of a wealthy family who lost everything, and the one son-in-law who had no choice but to keep them all together by convincing his father-in-law to run for president and accept Russian bribes for a pee pee tape. It's Jared Kushner's Arrested Development.

We're just doing our part to help spread the rumor that Princess Ivanka and Little Donnie may have tried to "bump off" Tiffany Trump for all the Trump monies a few years back. (No, not kill her, just take her inheritance. At least we think not kill her. That would be worse than we expect from them, which is pretty bad already!)

Somebody called into C-SPAN to bemoan the death of Sunday/Monday night sportsball now that all the black people are giving everyone a sad.

And here's your late night wrap-up! Stephen Colbert had talky-time with Chi-town's own super nice guy Chance the Rapper; James Corden thinks Trump needs to tackle the right problems; Jimmy Kimmeltalked frankly about hearing regular schmoes' love of Obamacare; Seth Meyers took A Closer Look at Trump's sportsball fighting; The Daily Showbroke shit down for all of you sons of bitches who don't UNDERSTAND WHY PEOPLE ARE PROTESTING!

Help us fight the good fight by giving us your money! We spend it on good times, like the Wonkebago and drinky things, also bills!!
Dominic Gwinn