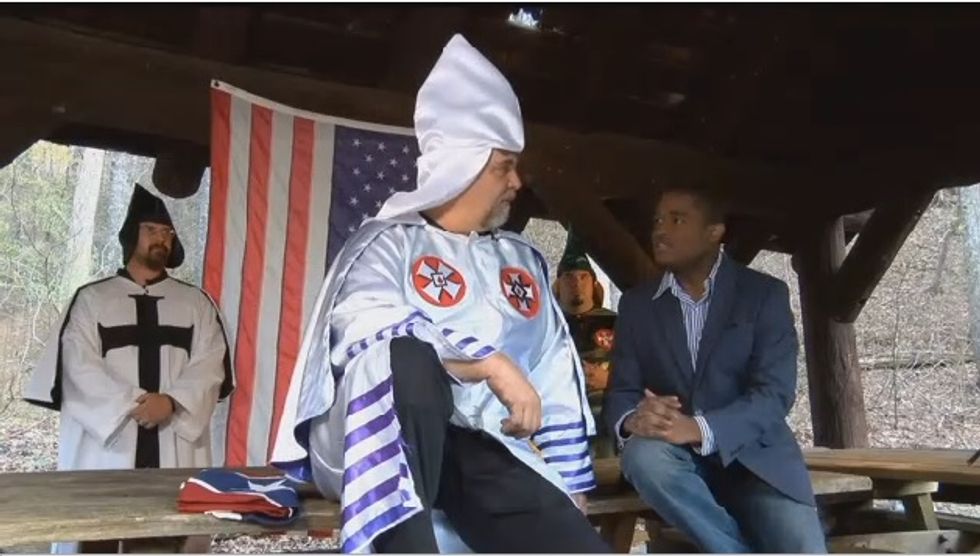 Another day, another Grand Imperial Wizard Dragon Skeksis Night Elf Cyclops of the KKK comes forward to talk about how super great he thinks Donald Trump is. This time, it is the leader of the Imperial Wizard of the Rebel Brigade Knights of the Ku Klux Klan in Virginia, who has refused to give his real name for reasons probably totally unrelated to not being proud of his totally normal beliefs. Dressed in his finest bedsheets, said Imperial Wizard told WWBT News anchor Chris Taylor that the KKK had sure gotten a bad rap based on the OLD DAYS, and that now they were just some nice dudes who like to play dress up and would really prefer to not interact with black people ever. They're not "white supremacists" he explained, but "white separatists." Because hey! Nothing creepy about that!

When asked which candidate he supported, the Imperial Wizard said “I think Donald Trump would be best for the job,” noting that “the reason a lot of Klan members like Donald Trump is because a lot of what he believes in, we believe in. We want our country to be safe.”

His second choice, he said, would be Kasich, explaining that although he agrees with what much of Ted Cruz says, he could not vote for him because he is not a real citizen, as he was born in Canada. Surely, that is it, and not the fact that Ted Cruz is not a white person!