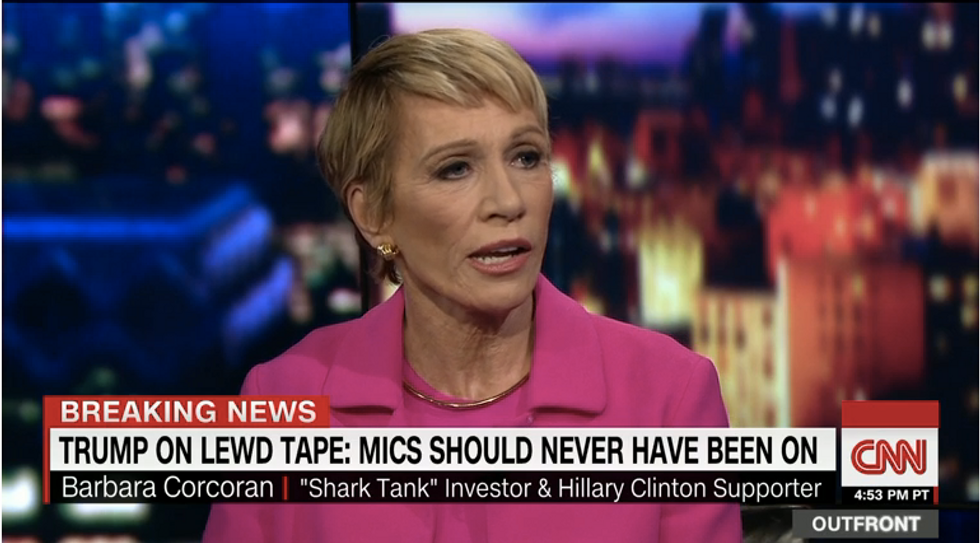 When businesswoman Barbara Corcoran heard Donald Trump on the Access Hollywood tape, she was not exactly shocked. Neither was I, or probably most women who have managed to develop their creep radar over the years -- but she had actual reason to not be too surprised.

In a CNN interview Thursday night, Corcoran -- who has known Trump for 45 years -- detailed an incident from many years ago in which Trump had some things to say about her breasts. At the time, Corcoran was pregnant and in a private meeting with Trump -- whose then-wife Marla Maples was also pregnant. Trump took the opportunity to comment on Corcoran's breast size versus that of his wife's.

"I was pregnant and he compared my breast size to his wife by putting his hands in the air," Corcoran told CNN's Erin Burnett on "OutFront," gesticulating with her hands. "I was in a business meeting. I was shocked."

Yeah! Not a thing that should come up in a business meeting! Or, you know, ever.

What he did, in that situation, was to assert power over her. It wasn't a light thing -- nothing like that ever is. He was willing to bet that she would just let it slide, he was willing to bet that -- because he is as "powerful" as he is -- he could freely comment on her breast size without facing any consequences. It's a pathetic sort of power assertion. You don't say something like that to someone you respect, you don't say it if you think there will be social consequences. And for Donald Trump, for most of his life, there were not any social consequences for being a creep. Now there are, and he is not happy about it. Not because he's embarrassed by his own behavior, but because he sees this as a diminishing of his power.

Corcoran added that she found his accusers credible, because -- duh -- that's just the kind of dude Donald Trump is.

"I just think it's preposterous that he's claiming he has done nothing like that," she said. "I mean, he has been that way. Always."

And that's really the thing, isn't it? Of course Donald Trump is a Creepy McCreeperpants. That's been his schtick for decades now. He's a sleazy dude who keeps trading in his wives for younger models (literally), runs pageants, goes on Howard Stern and talks openly about what he thinks his daughter's boobs are going to look like when she grows up. Who could possibly be surprised by him being a creep to women?

I will tell you! Any woman who says she doesn't believe he's a creep is either lying or way too sheltered for her own good. Like, growing-up-in-a-cloistered-convent sheltered. Any woman who claims that it's unusual for women to talk amongst themselves about which men are creepy without "going public" about it is also full of shit.

Hell, I've had women I don't know, in bars, warn me about talking to men who had been creepy to them. It's a thing we do for each other. I've also spent the majority of my life with a huge rack, so I am more than well aware that there are lots of men who are not at all shy about bringing that up in casual conversation. Though, I must say, never has this occurred in a business meeting. That would be a new one on me!

Donald Trump is a creep, and we all know it. Barbara Corcoran knows it, probably every woman that's ever associated with Trump knows it, and every woman who has ever met a creep in her life knows it. And, if by some horrendous turn of events, we end up with Donald Trump for president, it will be a signal to the world and to every man in this country that we find this kind of behavior totally acceptable and fine and even admirable. That will be who we are -- and that will be creepy as fuck.