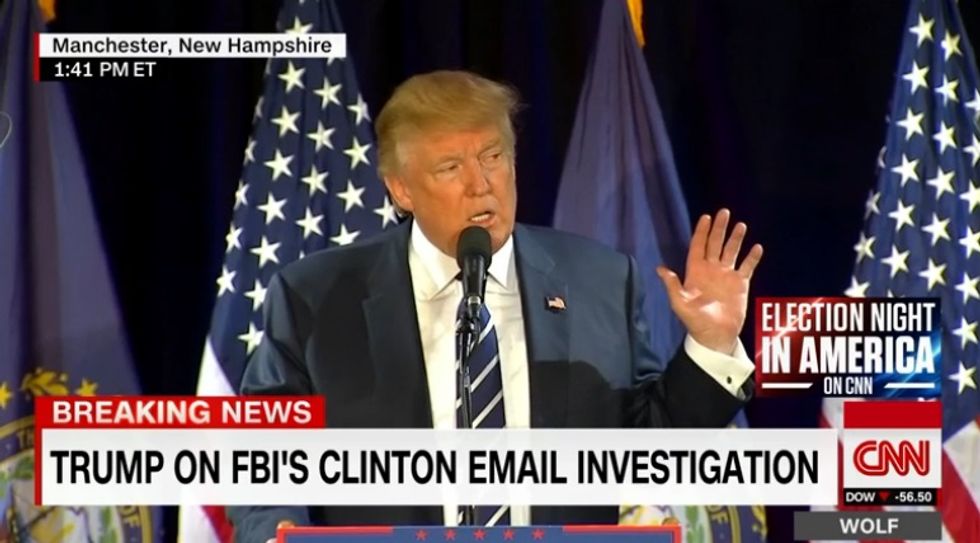 Donald Trump is so excited the FBI is investigating emails related to Hillary Clinton that he can hardly stand it, so it's probably going to be a big letdown when he eventually finds out -- possibly sometime after election day -- that today's vague letter from FBI Director James Comey is apparently not about emails from Hillary Clinton at all. Remember, as we noted earlier, the Comey letter said only that while looking at an "unrelated case" (which we now know is about Anthony Weiner???!!), it had found "emails pertinent to the investigation" and that the FBI is looking at them. That is literally all.

So, without any actual information at all, Trump is certain this will be the final nail in Hillary Clinton's electoral coffin. At a campaign appearance in New Hampshire, Trump was exultant:

Trump on FBI reopening Clinton email investigation: "We must not let her take her criminal scheme into" Oval Office. https://t.co/ic2KeSwRDK

Trump announced to a cheering crowd that the FBI had found new emails pertaining to the case (true) and that they are "reopening the case into her criminal and illegal conduct that threatens the security of the United States of America." (pure Trumpian bullshit, more cheers). And then there was the usual stuff about how Hillary Clinton is the most corrupt human in history, and "We must not let her take her criminal scheme into the Oval Office." Cheers and universal cries of "Lock her up! Lock her up!"

How big is this find, according to Trump? SO BIG! Bigger even than Watergate!

Trump after FBI reopens Clinton email investigation: "This is bigger than Watergate." https://t.co/c3Zwyhb6Yyhttps://t.co/HbrtfTLo95

After all, Watergate merely involved an actual attempt to rig an election, and then cover up the evidence, while Hillary Clinton deleted some emails and the FBI determined she had not broken any laws.

Still, Donald Trump finally respects the FBI again, and maybe even thinks the system might not be as rigged as it seemed to him when he got out of bed this morning:

Donald Trump says system "might not be as rigged as I thought" after FBI reopens Hillary Clinton email investigation https://t.co/rGvfclRVm0

So now, at long last, Donald Trump will take his rightful place in the White House, and Hillary Clinton will go to jail forever -- or maybe before a firing squad -- for... for... for Anthony Weiner's sexting with a 15-year-old. So get ready for the entire election to change, everyone! Donald Trump is jazzed, his crowds are out for blood, and somehow, this election is now all about Anthony Weiner stroking his dick while sexting with an underaged girl.

We're glad we could clear that up for you. We'll be right back with an update on Trump's evening rally in which he proclaims the FBI is totally corrupt, Hillary Clinton, James Comey, and Anthony Weiner should all stand in front of the same firing squad, and he'd really like to get a look at that underaged girl if he can.