Donald Trump Just Wondering If Hillary Is A Muslim Or What. You Know, Like Her Girlfriend Maybe. 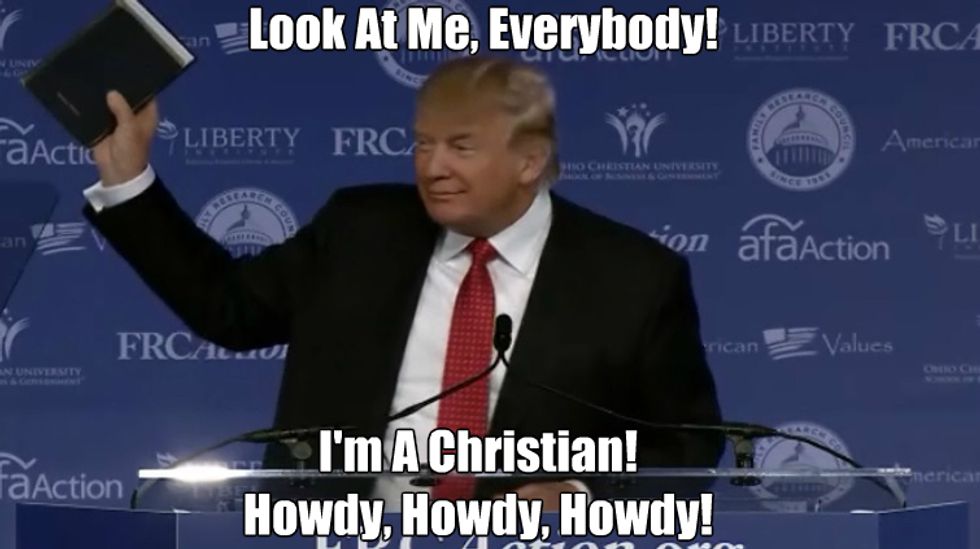 Our leaders are "selling Christianity down the tubes" #ConversationWithTrumppic.twitter.com/55PBY26aAv

Donald Trump is having Thoughts again, which can never be a good thing. In a meeting with "top social conservative evangelical Christian leaders" Tuesday, Trump wondered out loud about Hillary Clinton's relationship with the Almighty, Whom Donald Trump happens to know is totally on his side, because why else would God have created an entire world for Donald Trump to live in? He's simply a concerned person of faith who thinks the Bible is one terrific book, according to what he's heard. But this Hillary Clinton, her religious faith is a total mystery to Donald Trump, and he warned the gathered evangelicals, "we don't know anything about Hillary in terms of religion."

How true this is! Now, we could look at her Wikipedia entry (or every single story published about Trump's comments) and see she's a Methodist, or says she is. But that tells us nothing about what's really in her heart, as Trump explained:

It's so true. And her birth certificate. What about that? Do we actually know anything about this stranger who simply appeared out of nowhere and started pretending she was fit to Walk With The Lord like Donald Trump does? Does she ever eat the little cracker and drink the little wine? She probably engages in some highly suspect religious rituals, like asking God for forgiveness, which is not something Trump has ever found necessary, as he also explained last summer:

“I think if I do something wrong, I think, I just try and make it right. I don’t bring God into that picture. I don’t.”

He's a busy Deity. Why bother Him?

Trump's meeting with the hugest classiest evangelicals -- he's very big with evangelicals, or at least with evangelical leaders, who almost certainly recognize a fellow con man when they see one -- was supposed to be closed to the press, but one of the "faith leaders" at the get-together, E.W. Jackson -- misidentified by the Hill as "E.W. Webb" (no, wrong washed-up Virginia politician!) -- posted a brief video clip to Twitter. Lord only knows what other wonderful things Trump said that we'll never find out about.

Trump went on to explain that while, yes, it's nice to pray for everyone, God really isn't into your stupid politically correct prayers, and no one should waste their time on prayers for leaders who are bad, like anyone who isn't putting America First. You trying to piss off God? Here's the whole sad church buffet of word salad, which future generations may someday study as the weirdest statement on faith and politics of Tuesday June 21, 2016:

“I said, 'Well, you can pray for your leaders' -- and I agree with that, pray for everyone -- but what you really have to do is pray to get everybody out to vote for one specific person.

Trump didn't manage to make similar stupid religious attacks work when he tried them against Ben Carson (who imploded quite nicely without any help, thanks), but Carson had to go and refuse to debate faith with Trump. We have a feeling that Hillary Clinton may not respond directly, but we know for a fact she has plenty of supporters who know a thing or two about the "whatsoever you do for the least of these" parts of the Bible, and they're unlikely to stay quiet. Just ask those Two Corinthians over there.