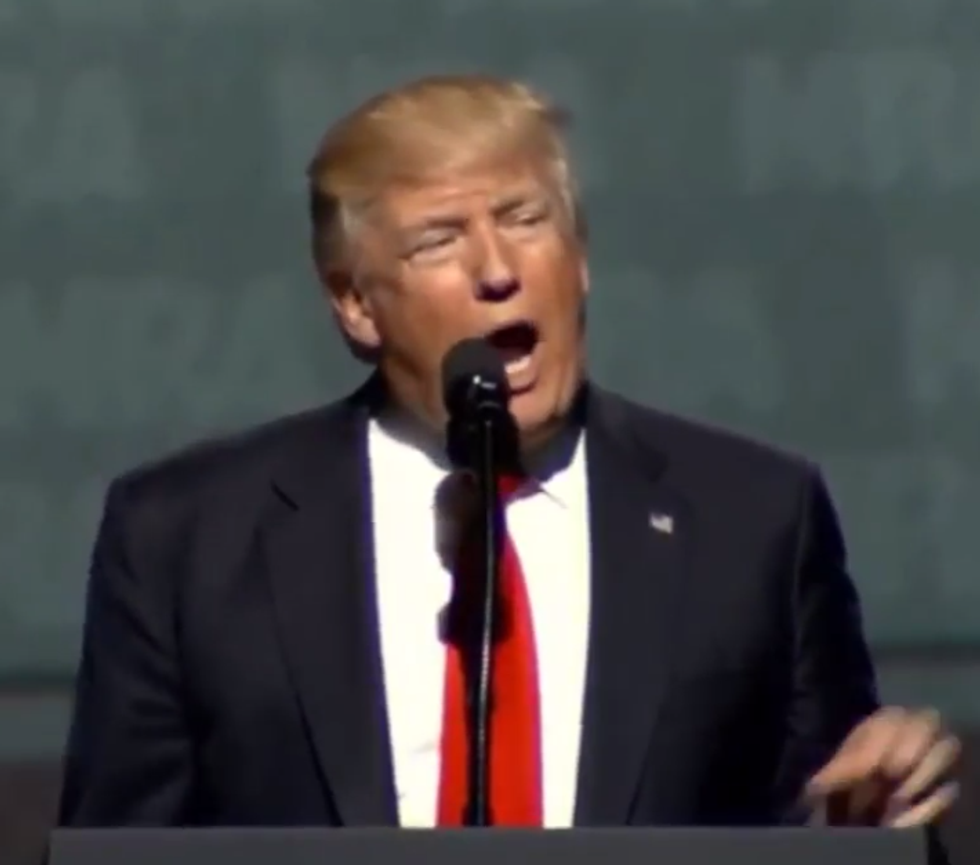 Wonder if they make mini-guns for that mini-paw of his.

Donald Trump addressed the big NRA hootenanny in Atlanta this afternoon! He was the first president to ever do that, since Ronald Reagan a long time ago! It was so 'sciting!

Before Trump came on, Lee Greenwood sang that one dumb song he sings, and everybody cried fake bald eagle tears, like they always do. Then Trump came on, and he said Georgia congressional candidate Jon Ossoff is a pussy who wants all the crime. Then he said in 2020, there are going to be a lot of candidates for president, but the NRA won't talk to any of them, because they are in gay love with Donald Trump. The other candidates will come to the NRA and say, "Hi, I would like your support," but the NRA will say "No, OTHER MAN, we love Trump!" Trump then clarified that they might be like "No, OTHER WOMAN," because it could be a lady running against Trump in 2020.

Then he called Elizabeth Warren "Pocahontas," which is still the funniest joke wingnuts have ever written.

Trump then listed off his "accomplishments" in his first 100 days, by saying something about veterans, and also he did a Supreme Court justice. (No, he didn't DO a Supreme Court justice, you perverts, what, do you think Trump is expressing his sexuality with Clarence Thomas? No way! OR ARE THEY? Nah, probably not. BUT MAYBE THEY ARE.)

His other "accomplishments" are that he nominated some cabinet members. Every time Trump said the name of one of his cabinet members, the pussy rednecks in the audience stomped their hooves and clapped their hands, and it was a good thing.

Trump gave a history lesson about why guns are very important, and it included this line:

Anyway, it was a very nice speech, and we didn't know what it would look like if Donald Trump and the NRA were giving each other a reach-around AT THE SAME TIME, but now we do.

Wanna watch it? Fuck no you don't, but here's the video anyway: