Donald Trump Knows Somebody's Doing The Firebombing, And It Is Animal Democrats 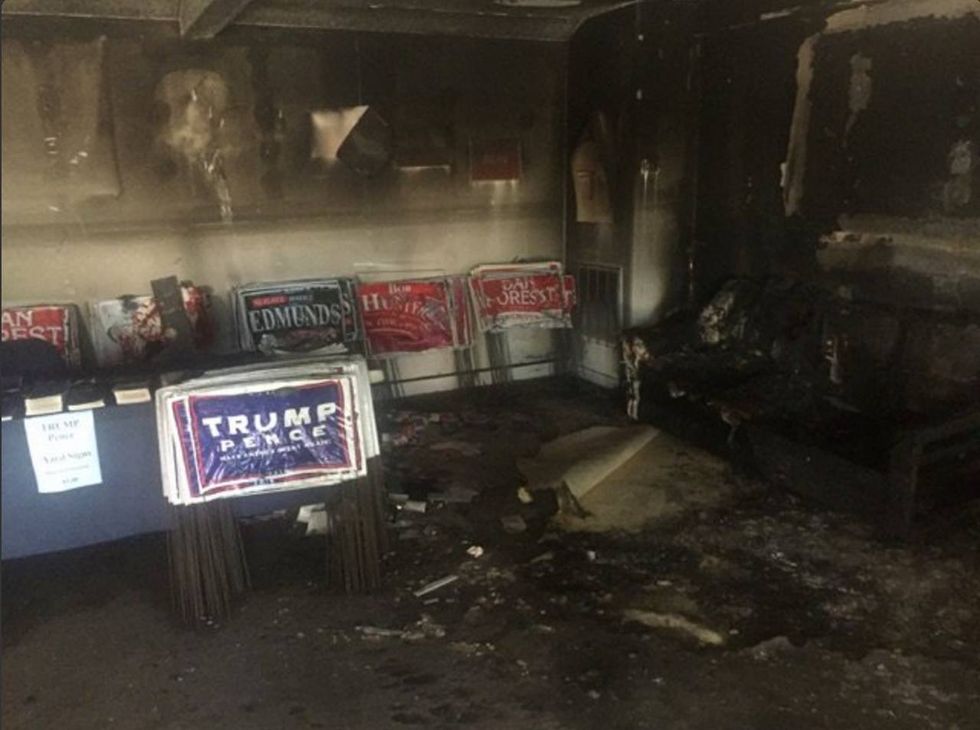 In case you slept the entire weekend, there was a firebombing at the GOP headquarters in Orange County, North Carolina:

Hillsborough police said somebody threw a bottle of flammable liquid through the window of Orange County’s GOP headquarters, setting campaign signs, supplies and furniture ablaze before burning itself out.

A swastika and “Nazi Republicans get out of town or else” were spray painted on the side of an adjacent building. No damage estimates were available.

“The firebombing of a local political headquarters in Orange County is clearly an attack on our democracy,” [North Carolina Governor Pat] McCrory said in a statement. “Violence has no place in our society – but especially in our elections. … I will use every resource as governor to assist local authorities in this investigation.”

This one time, Wonkette agrees with Gov. McCrory, who is at all other times A Idiot. Firebombing is very bad and should not be done EVER, but especially during a U.S. American election. Despite how Donald Trump is crying about how the election is rigged -- including with voting machines! -- because his sad loser ass is losing, free elections are a cornerstone of our democracy, so if you did the firebombing, BAD JOB and DELETE YOUR ACCOUNT.

Speaking of Trump, here is what he tweetered about the firebombing, when he wasn't too busy crying over how mean "Saturday Night Live" is to him:

Somebody's doing the firebombing, and Donald Trump knows who it is before an investigation has even taken place. We also must take issue with Trump's use of the word "winning," since every recent North Carolina poll shows Hillary Clinton taking the state.

Speaking of Hillz, here's what she tweeted about the event:

The North Carolina GOP said thank you to both candidates, on Twitter, because in 2016, Twitter is how we communicate about important things.

So, very good news that nobody was hurt! As to who actually did it, we don't know. As of this point, there are no suspects being publicly named. Was it animals representing Hillary and the Democrats, as Trump suggested? The Charlotte Observer points out that Orange County is super-Democrat, so could be we guess! Was it Hillary and Vince Foster's ghost? Did some clever Trump supporters -- those words have never appeared together, have they? -- decide to do a false flag and bomb their own HQ? Malcontent teenagers with nothing better to do? Was it WikiLeaks? We don't know! Unlike Donald Trump, Wonkette does not prematurely ejaculate conclusions about whodunit, when some bad thing happens.

But for a silver lining to this story, some mean Democrat animals decided our American democracy is way more important than partisan politics, and started a GoFundMe to rebuild that Republican campaign office, and it made its $10,000 goal pretty much immediately:

As Democrats, we are starting this campaign to enable the Orange County, North Carolina Republican office to re-open as soon as possible.

Until an investigation is undertaken, we cannot know who did this or why. No matter the result, this is not how Americans resolve their differences. We talk, we argue, sometimes we march, and most of all we vote. We do not resort to violence by individuals or by mobs.

So, let's all pitch in, no matter what your party affiliation, in and get that office open again quickly.

Here is a tweet from David Weinberger of Brookline, Massachusetts, the animal Democrat who started the crowdfunding campaign:

Hooray, even in the middle of the most toxic election of our lifetimes, people are still good!

So! Firebombing is never a good thing to do. No matter who did it -- whether it was Trump supporters or Hillary supporters or a local bunco group that accidentally drank all the moonshine and went cray-cray -- they did A BAD THING.

We could scour the internet for wingnut reactions to this, but we'd rather focus on how out of a bad thing came a glimmer of hope that Americans are still basically good people who understand that political differences are just political differences and maybe America will be OK after all, because we still have 22 days to go before this fucking election is over, and our therapist says we need to focus on happy thoughts.