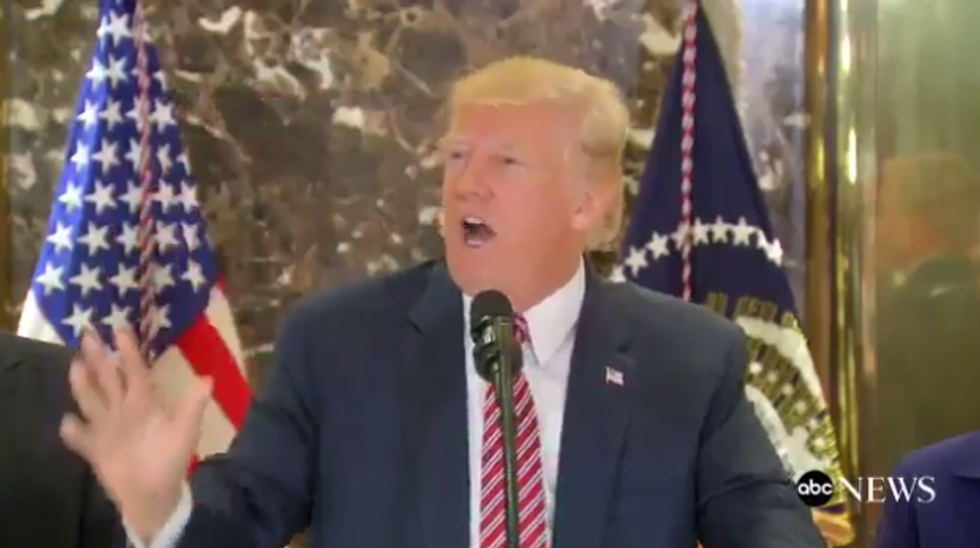 OH WOW HOLY SHIT DONALD TRUMP WHITE SUPREMACIST MOTHERFUCKIN' SAY WHAT? The president of America just did a press conference in the tacky-ass lobby of Trump Tower about his stupid "infrastructure" plan, but we all know that's not what journalists wanted to talk about. And Trump got MAD.

And we learned A LOT about Trump's true feelings about the Nazi attack that happened in Charlottesville this weekend. You can go ahead and disregard his Monday statement and go back to what he originally said this weekend, because Trump's point is that BOTH SIDES DO IT and BOTH SIDES ARE BAD, and did you know those Nazis had a permit, whereas the counter-protesters didn't even file the proper paperwork?

No, for real. And did you ALSO know that some of the people protesting the removal of confederate traitor loser statues weren't even Nazis or white supremacists, just normal sweet (racist) people who love (racist) statues? Don't let their screams of "Jews will not replace us!" and "Blood and soil!" fool you, these were STATUE LOVERS!

In case you're worried those tweets are somehow inaccurate, here's video of Trump saying exactly that:

President Trump on Charlottesville: “There are two sides to a story” https://t.co/UYpqI3w42Lhttps://t.co/OQnTTHerZs