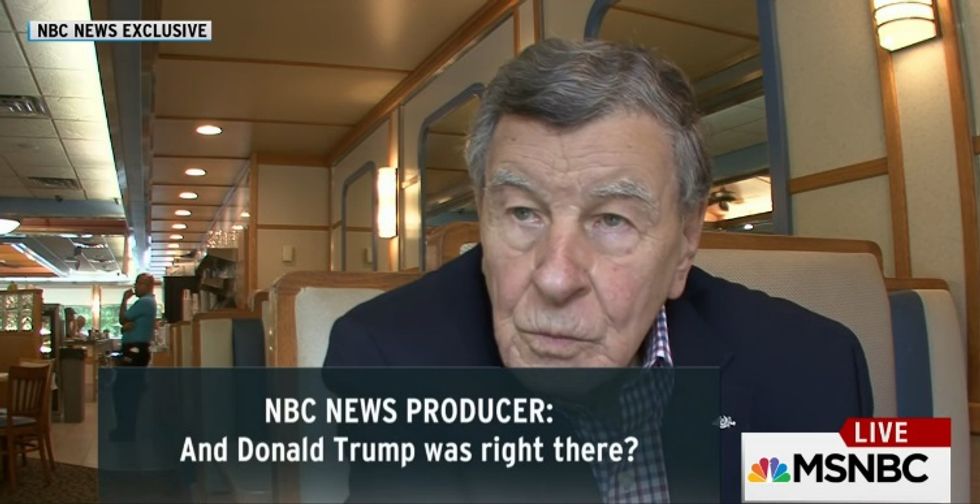 During the presidential debates, Donald Trump insisted the only important thing about a federal fair housing lawsuit accusing the Trump Management company of refusing to rent to blacks was that the suit ended in a settlement that admitted to "no wrongdoing." With less than two weeks to go before the election, plenty of people are coming forward to remind us that no matter how much he says that, Young Donald Trump nonetheless ran the company very much in the way his daddy, Fred Trump, taught him. And Trump was sued not just once, in 1973, but then a second time, in 1982, for failing to actually follow the consent decree that settled the 1973 suit.

Tuesday's Rachel Maddow Show offered some details on those practices, including an interview with Stanley Leibowitz, a rental agent for Trump in the 1960s, who recalled a particular instance of blatant discrimination in 1963. One black applicant had been especially persistent in calling back to check on the status of her application, and so Leibowitz asked Fred Trump what to do with it.

"Mr. Trump and his son Donald came into the office. I asked what I should do with this application because she's calling constantly and his response to me was, 'You know I don't rent to the N-word. Put it in a drawer and forget about it,'" Leibowitz, 89, told NBC News. "Donald Trump was right alongside his father when I was instructed to do that."

This isn't exactly new news; the New York Times reported on the account of the applicant, Maxine Brown, back in August, and the New York Daily News interviewed Leibowitz about the incident in September. But this time we have Leibowitz on camera saying that Donald Trump was there nodding in agreement while his dad said "You know I don't rent to niggers."

Not surprisingly, the Trump campaign has issued two denials of the story. In reply to a specific query from the Maddow show about Leibowitz's comments, spokesperson Hope Hicks issued a statement saying only "This is total nonsense." In a separate reply to NBC's reporting on the housing discrimination cases, Hicks said in an email,

There is absolutely no merit to the allegations ... This suit was brought as part of a nationwide inquiry against a number of companies, and the matter was ultimately settled without any finding of liability and without any admission of wrongdoing whatsoever.

Now, the real problem here isn't simply that a 17-year-old Donald Trump may have stood there and nodded while his father used the N-word over 50 years ago. The real problem is that there's no evidence that Trump today sees any problem with anything his father did, from being arrested at a KKK rally in 1927 to the the way he ran the property management company all his life, or with how Donald Trump himself continued to run the company until the Department of Justice sued him -- twice -- and forced him to change his business practices. In Trump's strange mind, if he wasn't forced to admit wrongdoing, then obviously he did nothing wrong. Among other words for that, "amoral" comes to mind.

As Wonkette founder Ana Marie Cox noted on "The Last Word With Lawrence O'Donnell," it might be unfair to make too much of a 17-year-old Donald nodding along with his dad while he said all that, because people raised by bigots sometimes grow past their roots. The problem is that Donald Trump "has shown no sense that he's changed at all" or that he's learned anything. And no, insisting "I'm the least racist person you'll ever meet" and "there was no admission of wrongdoing" aren't exactly a demonstration that he's gotten all enlightened on race, especially when he thinks black people all live in Hell and tells his white supporters to go out and watch the polls for voter fraud. "Growing and learning are not exactly his core competencies," after all, said Cox. Plus, he sure has made a habit of proudly saying he learned everything he knows about real estate from his dad.

The new video of Stanley Leibowitz recalling how Fred and Donald Trump did business in the old days isn't the only reply to Trump's "no wrongdoing" idiocy. Hillary Clinton's campaign has released a web ad featuring Mae Brown Wiggins, another woman who was denied an apartment in a Trump complex, and who still feels the pain today. (Yes, get ready for the inevitable rightwing claims that Wiggins should just get over it, and is the real racist for holding onto her hatred of white people so long. And of course accusing Hillary Clinton of needlessly dividing America.) It's powerful stuff.

We also want to rather noisily point out that while that word tends to grab the headlines (and good god, if the alleged video of Trump saying that word on the set of "The Apprentice" were to actually exist, we'll hear nothing else but that til November 9), it's the actual discriminatory actions that should be every bit as outrageous, regardless of whether that word was flung about. Paula Deen needs to be condemned for her very recent habit of not letting black employees work the front of the restaurant or use the bathroom, even more than for using that word in the '80s.

Yes, Donald Trump's attitudes are abhorrent. But it's also not isolated to Donald Trump or to what his dad said about black renters in 1963. What's also abhorrent, and also needs to be front page news, is that Donald Trump is part of a party that sent Indiana state police to raid the office of a voter registration drive focused on increasing black registration, possibly denying the vote to 45,000 newly registered voters, shutting down the registration and GOTV efforts of the Indiana Voter Registration Project (IVRP). Conveniently, that raid came with just one week remaining before the deadline for new voter registrations.

And why was that massive raid needed? Obviously, to prevent voter fraud, because out of those tens of thousands of new registrations, Republican Secretary of State Connie Lawson said in September that her office had discovered at least ten whole applications where signatures appeared to be forged. As in most states, the people running a voter drive are not allowed to discard registration applications even if they suspect there's a problem, but must send them on to the Secretary of State's office for review. Lawson's response seems perfectly reasonable: she sent out a letter accusing the IVRP of mass criminality, reading in part,

"Unfortunately, it has recently come to my attention that nefarious actors are operating here in Indiana," she wrote. “A group by the name of the Indiana Voter Registration Project has forged voter registrations. ... If you receive one of these applications, please contact the Indiana State Police Special Investigations."

The state police claim -- without offering any evidence -- that "hundreds" of registrations submitted by IVRF could be suspicious, and the investigation could take months. There are also reports of state police harassing IVRP canvassers, trying to intimidate them. Bill Buck, spokesperson for Patriot Majority USA, a liberal group that runs the IVRP, said,

We've seen nothing but partisan activity from the secretary of state, and even from the police [...] They saw that there was a very successful voter registration drive happening, and this was an attempt to shut it down.

So yes, potentially trashing 45,000 new registrants' applications over a small number of iffy applications strikes us as pretty damned bad, too. Even though Ms. Lawson -- a close ally of Mike Pence -- carefully avoided using that word.