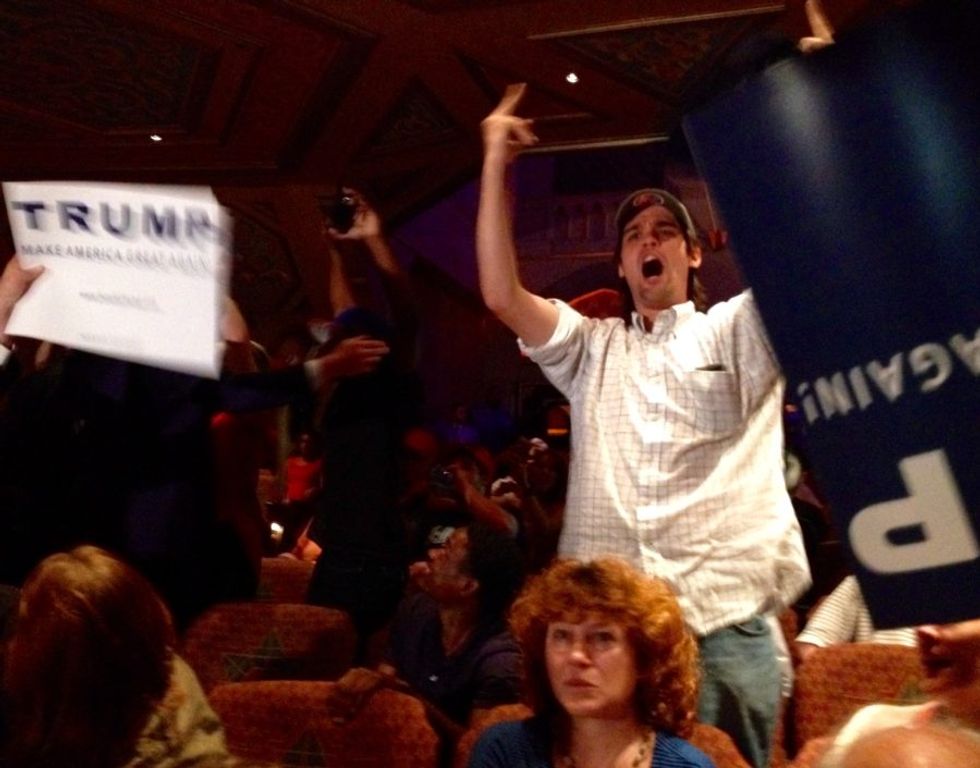 Quay, a 16-year-old private-school kid from a tony Atlanta suburb (mostly obscured behind that reporter's head, MOVE, DUDE!) and his little Trump friends exchange views with a sizable man wearing a Black Lives Matter t-shirt. Minds did not appear to change, but at least the press stayed busy.

We did a supposedly brave thing yesterday, and went to see the Donald Trump Howler Monkey Circus as it stopped in Atlanta! And we were not even slightly killed!

We had been warned that the traveling Trump show could be a bit, ah, rustic and spirited, but we figured we were getting the old-folks matinee version, having it at noon at the Fabulous Fox Theatre, a 1920s movie palace located in one of the gayest zip codes in America.

But we were still a little nervous when we arrived and started talking to the early crowd of anti-Trump protesters setting up across the street, who seemed nervous, too. We're pretty sure they thought we were a cop compiling some sort of protester database with our ancient Sony Cybershot camera. But they relaxed after we explained to them that we were with yr Wonkette, and were merely wearing Denny's manager drag to keep from being thrown out of the rally later.

Susan B. Citizen (if that is her real name) was shy at first because we are the most cop-looking person you have ever seen this side of a cop.

We all wondered if Trump actually knew what he was doing in coming to Gaylanta Gay Ground Zero. Sharon, a corporate hiring type person who said she was representing "Business Ladies Against Trump," said she thought not. "It's just a very incompetent organization," she said. (We are using just people's first names, because we don't even use our own name here and anyway, this way we have an excuse not to check spelling. Plus it keeps away the Twitter flying monkeys.)

Brandon from Marietta had the opposite view, and thought Trump was there specifically to pander to teh Gayz. He may be right! Donald did talk a lot about about the "gay community," which seemed to unsettle his audience, most of whom are quite aware of the common roots of community and Communism. More about that later.

Trump vendor Robert, of Sarasota, Fla., volunteered that Bernie Sanders has it all wrong on free education. You can get that now just by joining the military, duh!

This being Atlanta, hardly anyone was there on time, and we were beginning to wonder if they'd fill the 4,700-seat Fox (reports from the balcony say they didn't). The warmup acts were familiar to locals and Fox News viewers (Ralph Reed, Herman "Shucky Ducky" Cain), but for some reason there were no Republican state politicians, in a state with a Republican governor and Republicans in charge of both houses of the legislature. Sad! Former University of Georgia sportsball coach Vince Dooley showed, though, and everyone enjoyed having a good old Bulldog woofing session.

Most of the people were wearing flag clothing and had driven an hour in their SUVs to get there, but there were a number of children from the neighborhood we saw sneaking in wearing Trump ball caps with their tight shorts, gym bodies and spotless Chuck Taylor high tops. Naughty! We later learned why they'd come.

We have covered some big, weird things before, including a Louis Farrakhan speech and the 1997 Promise Keepers rally in DC, and these Trump people could use some pointers on organizing a proper freak show. Herman Cain was great, all shucky ducky this and shucky ducky that, and letting us know that only in America could a chauffeur's son grow up to ride in the back of a limo, for now, unless Trump gets beat, in which case enjoy pedaling that rickshaw, suckers! But after Cain, we got 30 minutes of no-doubt unauthorized '70s rock music (Elton John, for Christ's sake, could you pander harder? Just play Donna Summer and get it over with).

There were quite a lot of ladies for Trump in attendance. They mostly wore flag colors. This has been your Trump Lady update.

During the lull, we eavesdropped on a couple fellows slightly older than we sitting behind us. One guy said he'd deliberately worn old, ratty jeans and not shaved, "So the Communist protesters would leave me alone." His new buddy, who had come from Habersham County 85 miles north of town, agreed that was wise, and said he'd driven "my old car." So, see, Trump united us all in fear of our lives.

Anyway, FINALLY, Trump came out to raucous cheers, almost as loud as the UNDER GOD we were all supposed to yell real loud during the pledge. And blah, blah, you know what Trump says. It's hard to report on, or even unpack, because he's such a cagey bullshitter that he doesn't even use proper nouns half the time, so he can later deny saying what he just said.

For instance, he did a whole bit about how Germany has supposedly fallen into the Radical Islamic Terrorism shitter, because of what "she" did, apparently assuming his audience would know that he was talking about German Chancellor Angela Merkel. They did not seem to know this, and just sort of shuffled their feet until he got back to whacking around Crooked Hillary.

The whole speech felt a bit like a Festivus celebration, where the head of the household spends WAY too much time on the Airing of the Grievances, while the kids just want to get to the dang Feats of Strength. Every time Trump bitched about Benghazi McPantsuit specifically, he got a deep-throated "YEAH!" Trump rally attendees LOVE getting to bellow "BUILD THE WALL!" but Trump would much rather complain about how Hitlery twisted his words on NATO, and how he never said Japan should go nuclear, but maybe they should, but not, and the media lied about EVERYTHING he said, and man, it is some boring stuff even for Trump supporters. You could hear the press pool rolling their eyes and yawning.

The press pool updates their Linked In pages in hopes of being hired by Wonket, between protester defenestrations.

Between all the kvetching, Trump restated that our country is dying of cancer (no, really) because it is run by weak and stupid people and it can only be fixed by the chemotherapy of being smart and strong under Trump.

All fine, but he got a lot less positive feedback with his latest brilliant thesis, that weak and stupid Obama and Crooked Hillary hurt the gays because they take the Saudi money, and we know what "certain people in certain countries" (he really put it like that) do to the gays. The Habershamers looked kind of confused by this, since they're used to lumping Crooked Hillary and the sodomites in one Satan Club, but at least it finally got the festivities started, the main point of a Trump rally, which is the Ousting of the Protesters.

The first guy to erupt, a bald, middle-aged man, set the tone by screaming bad words and pointing his middle fingers at Trump, the crowd, and the whole cockamamie scene before stomping out. They loved it. One guy yelled "Put them up against The Wall!" every time a protester made her or himself known (it happened at least 10 times). Very few of those slim boys with shaped eyebrows and Trump hats stayed to the end. Nor this dude.

One young woman who looked barely 20 was filming while visibly ready to EXPLODE at the bullshit she was hearing, until Trump mentioned his "support" from the gay community. "FUCK YOU!" she yelled, and then seemed shocked by it. They actually let her sit down and be quiet, while ushering out some other protesters, but she eventually couldn't keep still and got the boot.

"Physically evict the Communist!" yelled Mr. Ratty Jeans. She walked out under her own steam after being asked by a polite Atlanta cop.

Young protester says, no thank you, I paid for my free ticket and I'm going to sit here until a real authority figure tells me to go. Screw you, Trumpkins.

Trump came back several times to how he's super popular with the "LGBT community, the gay community, the lesbian community," and nobody seemed to be buying that ice cream. The place started to leak from the back like a Braves game crowd when he had about 10 more minutes of off-the-cuff rambling left.

Afterward, we checked back in with our friendly anti-Trump protesters, where things apparently had gotten a bit heated and slightly physical. One dude had been arrested for snatching the hat off a Trump supporter (the Trumpkins supposedly came over and hung out next to the protesters, just to irritate them), and there were a few more arrests. The cops had surrounded the BLM and anti-Trump area and were not letting anyone else in.

Police and anti-Trump protesters are a wee bit tense in the rain after the rally, as the Trump crowd files out of the Fox Theater.

So we went home in the rain and ate hot dogs. Because America is still fucking great without you, you pompous fascist.