Donald Trump Made Up Exciting New Insane Shit To Lie About In Nashville Rally! 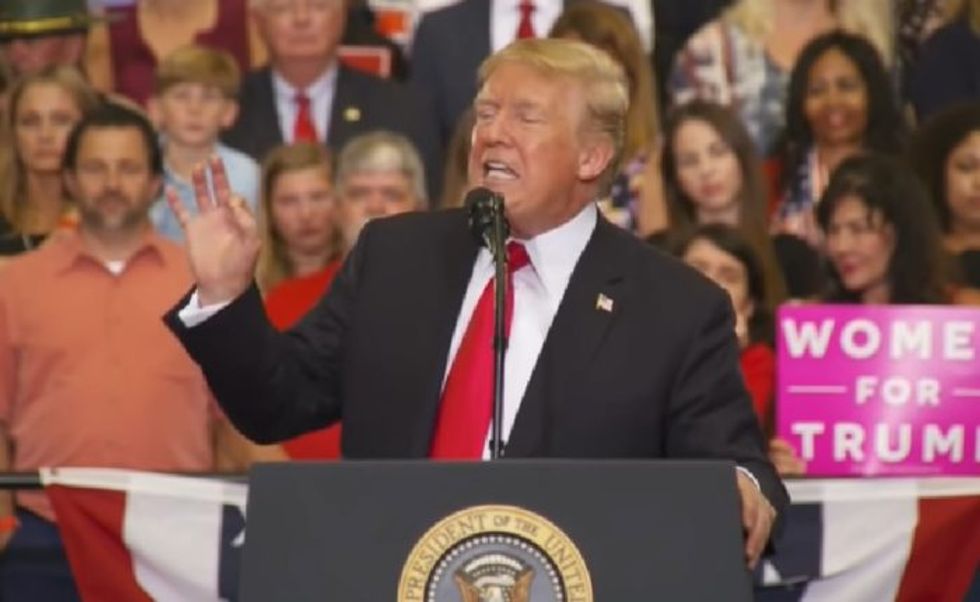 Donald Trump shambled out onto the stage of the not-actually-full Municipal Auditorium in Nashville Tuesday night to do one of his campaign rally things, ostensibly to help the Senate campaign of US Rep. Marsha Blackburn, but mostly because he needs to know that everyone at a Trump rally still loves him. It was the same familiar mix of lies and race-baiting that got him elected, and if you want to hurt your brain you can watch the whole sorry spectacle in the video up top. It's worth looking at, if only to remind you of just how disjointed and stream-of-whine-nationalism Trump is at these things. He had a teleprompter, but as usual, mostly just went riffing off in random directions.

The pandering was deep, albeit weird -- early on, Trump said he just loves country music, which we've never seen any evidence of. He might just mean that one Toby Keith song that is now in your poor head, too.

After introducing Sen. Bob Corker (and that guy needs to decide what the hell he is doing), to boos from the audience, Trump said Marsha Blackburn would be a great successor, and, proving he knows his audience, said of the former two-term Nashville mayor and two-term Tennessee governor who's running on the Democratic ticket, "Phil Bredesen -- I've never heard of this guy. Who is he? Who is he?!" As we noted in our Senate Sunday profile, Bredesen is much better-liked in Tennessee than Blackburn, whose appeal to voters suffers every time they're reminded she's Marsha Blackburn.

Trump used the occasion to try out a new nickname for Nancy Pelosi, calling her ""the MS-13 lover. She loves MS-13, can you imagine?" That's a perfectly accurate description of Pelosi's condemnation of Trump's conflation of all immigrants with MS-13, after all. He also said Bredesen -- whom he called either "Philbert" or maybe "Phil Berg" -- was recruited by Chuck Schumer so Pelosi and Schumer could have a mindless puppet to control. Worse, Bredesen, whose name he eventually found on the prompter, had given money to the Obama and Clinton campaigns. Isn't that illegal? The crowd dutifully chanted "Lock her up! Lock her up!"

In what seems to be either a new bit or something recycled from the campaign, Trump explained that NOBODY went to Hillary's rallies, but when they did, they only showed up to see Jay-Z, whose awful f-words made Donald Trump look like a very "clean-cut" serial sexual assaulter:

Trump goes after JAY-Z at Nashville rally: “His language [at 2016 Clinton rally] was so filthy, that it made me like the most clean-cut human being on earth… and by the way, without any musical instruments, I had much bigger crowds than he was drawing.” https://t.co/1t7fXRT2Fwpic.twitter.com/G2415ZTDV5

Among other outright lies, Trump claimed he had already started building his big beautiful wall in California, but decided he'd suddenly stop building the wall to put pressure on Jerry Brown, that crazy stupid Mexican-loving governor, ha ha ha! Not a bit of it is true, if anyone cares about such sweet old-fashioned notions:

Trump is telling his usual lengthy ramble-lie about how "San Diego" came and begged him for The Wall. None of this happened. San Diego's Republican mayor opposes the wall, and its city council held a formal vote to express disapproval.

He also lied about illegal immigration being way way down (if so, why do we need the damn wall?) and about the need to end "chain migration," with a lie about how the driver of the van that mowed down people on the bike path in Manhattan had "brought in 22 people," which isn't even remotely plausible. And since the actual details were apparently not gruesome enough (one woman lost both legs after being hit), Trump added extra limbs: "MISSING A LEG! MISSING AN ARM!" Just limbs flying everywhere. Probably one severed arm or leg flying through the air for each of the 22 fellow terrorists the attacker brought into the country. He also lied about the immigration lottery, and thank goodness Toronto Star reporter Daniel Dale has been keeping a tally:

Trump is graphically recounting the story of the West Side Highway terror attack. "MISSING A LEG! MISSING AN ARM!" Nobody lost an arm in this attack. One woman lost two legs.

To summarize, illegal immigration is down (it's not) but we have to build a wall to end chain migration and the immigration lottery, neither of which Trump knows anything about. Oh, but there's good news on the big beautiful wall!

Trump in Nashville tonight: “In the end, Mexico is going to pay for the wall...and they’re going to enjoy it.”

Mexican President Enrique Peña Nieto (@EPN) reaponds on Twitter: “NO. Mexico will NEVER pay for a wall. Not now, not ever.”pic.twitter.com/ITYlWQuPrj

It's obvious Trump no longer believes a bit of that, and his supporters don't care either, but it sure feels good to chant. Trump also has a new chant to play with: Calling MS-13 (population approximately all Latinos in the USA) ANIMALS!:

Trump is in Nashville and he's going right back to the "animals" comments regarding MS-13.

This time he gets the crowd to join in.

The dehumanization of a popluation allows people to lose empathy for others, makes people numb to their pain, and allows them to cause them harm. pic.twitter.com/sOzao3uLj9

And yes, he really did say the people of Long Island welcomed ICE agents like a liberating army. Get ready for Trumpers to start beating up random brown people in the name of stopping the animalistic crimes of MS-13. We have no choice, as the man likes to say.

Trump, in Nashville, says African Americans have blindly voted for Democrats “for over a hundred years.” If only black folks had the right to vote for that long ...

And as proof of how far we've come, the follow-up tweets quickly descended into a "well actually" discussion of how blacks got the right to vote immediately after the Civil War, SO THERE. And how dare Bennett pretend that was untrue simply because most were unable to actually exercise it until 1956 (no, please do not mention the Voting Rights Act being gutted in 2013). Also something something party of the KKK and Robert Byrd MAGA!

So yeah, it was a Trump rally is what we're saying.