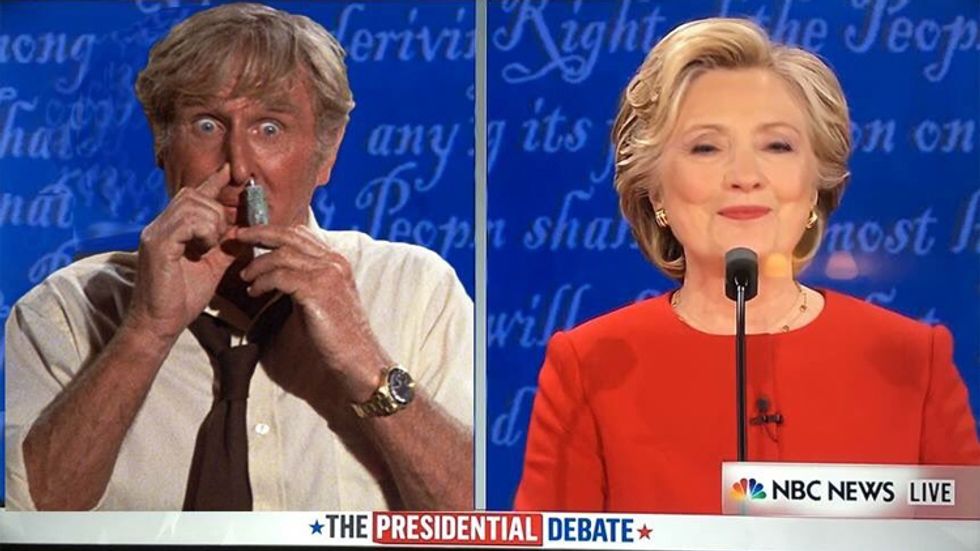 Just a quick de-clarification on Monday's debate: You may have heard Donald Trump say that if he never paid taxes, that would mean he was smart, but he denies having said that, even though those may have been the words that seemed to come from his mouth. Probably a bad mic. Now, if you believe the lying video and transcript of the debate, it might seem like Trump bragged about not paying taxes, when Clinton raised the question of why Trump hasn't released his tax returns:

Clinton: Or maybe he doesn't want the American people, all of you watching tonight, to know that he's paid nothing in federal taxes, because the only years that anybody's ever seen were a couple of years when he had to turn them over to state authorities when he was trying to get a casino license, and they showed he didn't pay any federal income tax.

Trump: That makes me smart.

Clinton: So if he's paid zero, that means zero for troops, zero for vets, zero for schools or health. And I think probably he's not all that enthusiastic about having the rest of our country see what the real reasons are, because it must be something really important, even terrible, that he's trying to hide.

Shortly after, there was this exchange:

Clinton: And maybe because you haven't paid any federal income tax for a lot of years. And the other thing I think is important ...

Trump: It would be squandered, too, believe me.

Obviously, the patriotic thing, and the smart thing, is to not pay taxes, because government bad, starving the government good. Clearly, he's a man of wealth and taste. Which sort of leaves you wondering why Trump would then go to the spin room and deny what a smart guy he was. Sort of -- here's the exchange with CNN's Dana Bash:

Bash: It sounds like you admitted that you hadn't paid federal taxes, and that that was smart. Is that what you meant to say?

He then went on to say he hates the way our government spends our taxes on foolishness like the Iraq and the South Africa, and such as. But no, he never said he doesn't pay taxes. But if he did, he'd be a damn fool. Not that he avoids paying taxes. Which the government wastes anyway on things it shouldn't spend money on. Like for instance why hasn't the government bought any beautiful paintings of Donald Trump? That's a good use of money.

The eyes seem to follow your wallet around the room

Clinton's campaign was quick to post a tweet with the exchange, explaining that not paying your taxes doesn't mean you're smart. It means you're cheating:

It makes you a tax evader. https://t.co/g9nQkSRvTB

That was pretty smart of them.