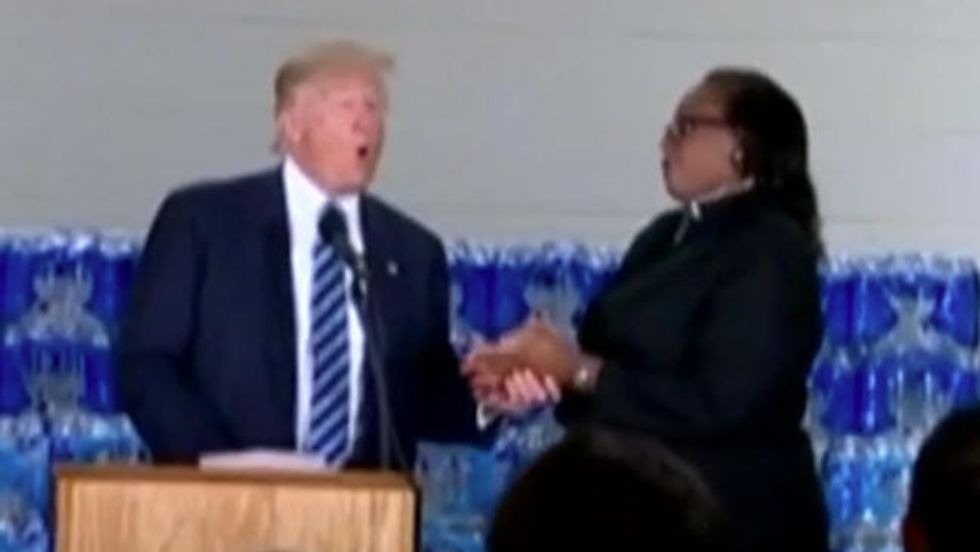 Donald Trump took his wisdom to Flint, Michigan, Wednesday, so he could make everything better by touring the city's now-dormant water treatment plant -- where he praised "the really good executives," yes he did! Trump then went on to give a short speech at Bethel United Methodist Church, where about 70 people gave him a tepid reception. "Tepid" may suggest more enthusiasm than there really was. Trump launched into a low-energy version of his stump speech, and even made a Very Funny Joke:

When the line was met with one person giggling instead of thunderous laughter, Trump went right along: "That's not good! That's not good! It's terrible!" He didn't get much farther into his standard litany of how Democrats and especially Hillary Clinton ruined Flint, because at about the 4-minute mark in the above video (skip ahead; it's worth seeing) a beautiful thing happened. Trump was in the middle of explaining how NAFTA had taken all the jobs away, and it was all Clinton's fault:

“Hillary failed with the economy just like she has failed on foreign policy — everything she touched didn’t work out. Nothing,” Trump said.

The Rev. Faith Green Timmons, pastor of the Bethel United Methodist Church, interrupted Trump while he was standing on a stage in the church’s fellowship hall.

“Mr. Trump, I invited you here to thank us for what we’ve done in Flint, not to give a political speech,” Timmons said.

Not that it really matters too much that Trump lied once again, but we should probably point out that NAFTA went into effect in 1994, five years after the release of Michael Moore's movie Roger and Me in 1989 -- a film documenting how GM plant closings had devastated Flint since the 1970s. Damn that time-traveling Hillary Clinton and her 40 years of ruining American manufacturing.

As Trump wrapped up, Pastor Timmons also had to shush hecklers, including one person who yelled, “You discriminated against Black tenants!" to which Trump replied -- somewhat politely, for him -- "Never, you're wrong. Never would." Except of course for how he did.

What was Trump doing in Flint with no advance notice, anyway? Turns out the trip had been arranged by Ben Carson's business manager and close personal friend, Armstrong Williams, which may explain why Flint Mayor Karen Weaver was completely blindsided by Trump's sudden announcement that he'd be in town -- the campaign hadn't contacted her at all.

For what it's worth, Trump never actually offered any actual solutions to the problem of Flint's lead-poisoned water, except of course his usual explanation that it never would have happened in the first place if he'd been president.

By Thursday morning, Trump had an explanation for what went wrong in Flint: That bitch pastor set him up! Trump claimed on Fox and Friends that Pastor Timmon had been conspiring to interrupt him ALL ALONG, and he knew this because she was nervous when introducing him, and also because she invited the media to see the speech:

Trump said he did at least feel a little better when he heard the audience yelling "let him speak, let him speak!" when Timmons sprung her nefarious trap:

“She had that in mind, there’s no question about it,” he said. “Everyone plays their games, it doesn’t bother me. I’ll tell you what really made me feel good — the audience was saying, ‘Let him speak, let him speak.’ And the audience was so great… but she was so nervous, she was like a nervous mess, so I figured something was up.”

Must be Trump's version of "but all the commenters agreed with me," because darned if we heard anything but applause when Pastor Timmons told him to keep politics out of it. NPR's Scott Detrow, who was at the event, says Trump is full of it, saying that as Timmons introduced Trump, "she didn't appear nervous at all." He also flatly states Trump lied about the crowd's reaction:

That isn't true. In fact, several audience members began to heckle Trump, asking pointed questions about whether he racially discriminated against black tenants as a landlord.

Detrow notes that Timmons actually "stepped in to defend Trump, saying the Republican nominee was 'a guest of my church, and you will respect him.'"

But that's not nearly as good a narrative as Trump's story about the rude black lady who set him up to look foolish, and the rude black people who weren't even receptive to his important message about how the burnt-out ruins of Flint are devastated by crime, and his inspiring "What the hell have you got to lose?" appeal to The Blacks. So ungrateful, those people.