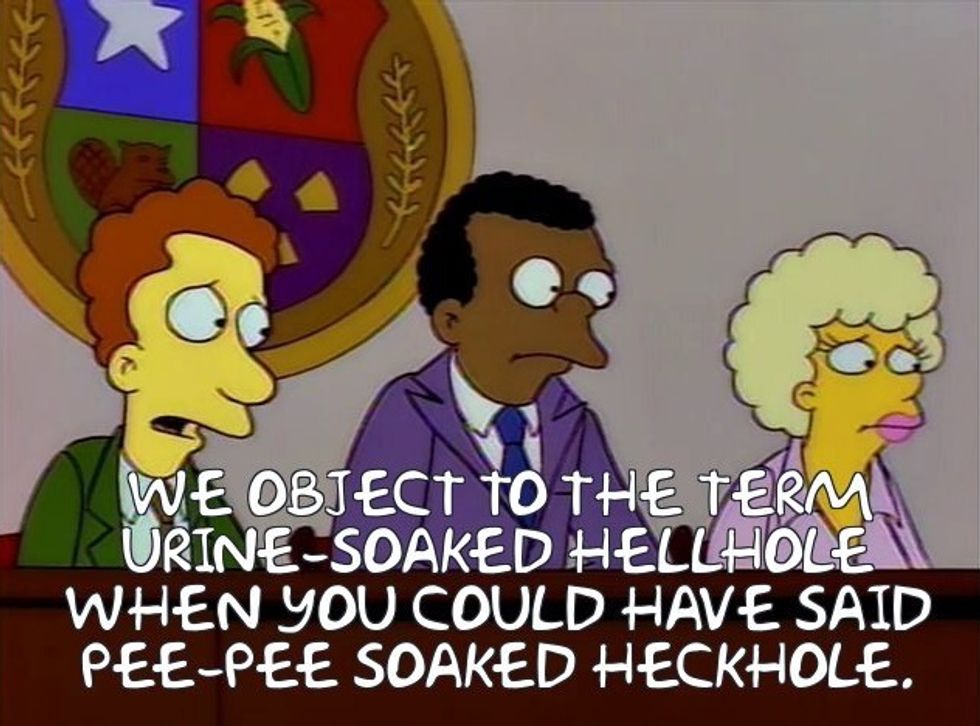 Won't anyone think of the children from shitholes?

In a meeting with Congressional leaders where he rejected a bipartisan Senate proposal on immigration, Donald Trump once again reminded us who he is. The Washington Post puts it too kindly, saying he'd grown "frustrated with lawmakers" after they proposed extending temporary protected status for people from Haiti and El Salvador, and then, according to "several people briefed on the meeting," Trump let himself be Trump:

“Why are we having all these people from shithole countries come here?” Trump said, according to these people, referring to countries mentioned by the lawmakers.

Trump then suggested that the United States should instead bring more people from countries such as Norway, whose prime minister he met with Wednesday. The president, according to a White House official, also suggested he would be open to more immigrants from Asian countries because he felt that they help the United States economically.

Trump also added a an extra-special slur for people from Haiti, insisting he'd reject any deal that includes those people:

“Why do we need more Haitians?” Trump said, according to people familiar with the meeting. “Take them out.”

And that's the real meaning of America, Charlie Brown.

Oh, hey, and today is the anniversary of the 2010 earthquake, which took at least 100,000 Haitians out and led to the granting of temporary protected status for Haitians here in the USA. But everything's just great there now, so get rid of them. It's not like they're from a nice country like Norway.

Deleted Comments: 'Donald T.' Has Thoughts On Haitians And Nigerians. They Are Very Racist Thoughts

Some trolls have opinions on everything, and the dumber they are, the louder they get.

The White House didn't deny that the incident happened, unlike the New York Times report saying that in June, Trump said Haitians "all have AIDS" and that Nigerians, once they saw the USA, wouldn't "go back to their huts." Instead, this time out, the statement from White House spokesperson Raj Shah blithely insisted America First: We want Mexicans from Norway, not Mexicans from Haiti:

Donald Trump, for his part, took to the Tweet machine this morning to deny he'd said what all the sources agree he said. And also, shame on those nasty senators for trying to mess up DACA by trying to fill America up with Haitians. With whom, by the way, he has a WONDERFUL relationship:

Illinois Senator Dick Durbin, the only Democrat at the meeting, says Trump's a goddamn liar, and that he's "seen the comments in the press, and I've not read one of them that's inaccurate":

Oh, but he's a Democrat. Are you going to trust a Democrat?

At MSNBC, the chyron proudly read "shithole," although anchors Joy Reid and Rachel Maddow said the word aloud just once or twice while directly reporting Trump's remarks, then euphemized like crazy afterwards. CNN, on the other hand, started out cautious, then decided what the hell, let's not pretend he didn't say what he said:

Fox News was a bit more circumspect. Tucker Carlson's show used "S***hole" in the Chyron, while Hannity's chyron was even more sensitive to the feelings of his delicate viewers:

On CNN, Don Lemon was happy to go with Shithole Pride:

I'm a descendant of people from a shithole country, and I'm sitting here on television and I get to hold the President's feet to the fire. God Bless America.

MSNBC's Lawrence O'Donnell noted that he, too, is the descendant of people from the shithole country of Ireland, and that American nativists feared the country would be overrun by a bunch of uncouth criminal bumpkins from that awful, poor, crime-ridden shithole. He also reminded us that for a long time, the Trumps of Long Island hid their German ancestry by falsely claiming Swedish roots.

Hope you have your deportation pants on, 'cause you're about to get deported.

Since it's Donald Trump, it's difficult to say how much calculation or even simple brainwave activity goes into any of his comments, but it's worth noting that Trump's immigrant-hating pals love him all over again, after having decried what had looked to them like a dastardly embrace of those nasty DACA people Tuesday. Whether he planned it or not (he planned it), Ann Coulter loves him again:

Mission Accomplished. The base has been reassured that Donald Trump is just as racist as they are.

And of course, some morons insisted that we shouldn't be jumping to conclusions and assuming this was about race at all, because maybe Donald Trump was simply contrasting the economic and educational achievements of Norway with those of Haiti, El Salvador, and that Africa place. Take Fox News shithead Tucker Carlson (please!), who explained that, in reality, all Trump meant was that a lot of foreign countries "aren't very nice":

Today, as you doubtless heard, during immigration talks, President Trump said something that almost every single person in America actually agrees with -- an awful lot of immigrants come to this country from other places that aren't very nice. Those places are dangerous, they're dirty, they're corrupt, and they're poor, and that's the main reason those immigrants are trying to come here, and you would, too, if you live there.

You could tell he was going out of his way to cleanse all the shit from Trump's shoes, because he had his extra-chirpy voice going. After pretending to be astonished that anyone -- mostly those elitist media outlets in "Washington, New York, and LA" -- would consider Trump's comments anything to get upset about, Carlson brought on his guest, Democratic strategist Jose Parra, who'd directed Latino outreach for the Obama campaign. But first, Carlson had to prepare the ground by framing how "dishonest" so many people were being about all this:

Of course you can have a debate over what countries we ought to admit immigrants from, and I think we are kind of having that debate, but what bothers me about the explosion this afternoon is the dishonesty in it.

And I will just give you one example. Joan Walsh, over on CNN, an analyst over there was asked just a minute ago, "Would you rather live in Haiti, or Norway." And she said, with a straight face, "I can't say."

Now, that's lying. If we have gotten to the point where we all have to pretend that every country is exactly as nice as every other country, then we are being dishonest.

Such hypocrites! Nobody would rather immigrate to Haiti over Norway (except people who prefer a year with 12 months of sunlight), although if you want to get all technical about it, the debate here is about who the USA wants to come here, not tourism to foreign lands.

Still, the Usual Suspects had their say, and were quickly asked by decent people to STFU. Former congressman John Dingell suggested to Fox's Tomi Lahren that maybe the anniversary of an earthquake that killed over 100,000 -- before you get into the health disaster that followed -- isn't the time:

While we're at it, if you want to talk about giving preference to countries with a high level of educational achievement, it's probably worth noting that African immigrants to the USA are kicking the educational-attainment asses of all US-born ethnic groups, including whites, and all other immigrant groups, including Asians, according to data from the 2000 Census.

And those Nigerians, with their huts? Just under two thirds of Nigerian immigrants have college degrees, a far higher percentage than immigrants from China or South Korea. Mind you, these stats say more about who's lucky enough to get into the US than anything else, but when it comes to African nations, they are definitely sending us their best people.

Oh, and as for more immigration from Norway, it seems they're not interested in leaving, for some reason. OK, many, many reasons:

And finally, more than one Tweetperson, including Yr Editrix, called attention to this 2011 article from Inc -- hardly a lefty magazine -- about all the entrepreneurs in Norway who just love their country's socialist policies, like one Wiggo Dalmo, who despite his name, is not actually a Hobbit. He's a very successful businessman who started out with a small machine shop and by 2011 had a $44 million company that employed 150 people. And Wiggo Dalmo is a big fan of high taxes, because he doesn't see them as theft; he sees taxes as a necessary payment for the services the government provides:

"The tax system is good -- it's fair," he tells me. "What we're doing when we are paying taxes is buying a product. So the question isn't how you pay for the product; it's the quality of the product." Dalmo likes the government's services, and he believes that he is paying a fair price.

It's a terrific article, and you should read the whole thing, duh. So thanks, Donald Trump, you did accomplish something yesterday: Applications from Americans looking to move to Norway are probably going to skyrocket this week, at least from folks who don't mind the whole 2-3 months of total darkness thing.

Yr Wonkette is supported by reader donations. Please click here to send us your Kroner!