Donald Trump Penetrates Deeper And Deeper, Into The Heart ... Of Dickness 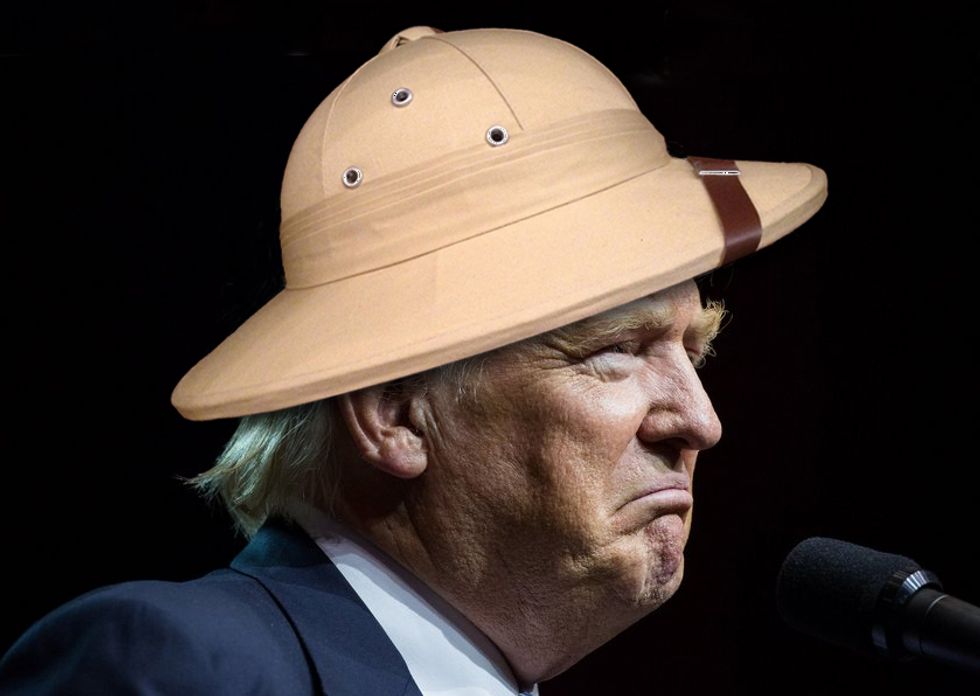 Bwana he no smart.

Following his breakout success playing Gen. Buck Turgidson in a dinner theater production of "UN General Assembly" Tuesday, Donald Trump followed up yesterday with a smash performance as "Generic Clueless Colonialist" during a meeting with African leaders. He did at least manage to stick to his prepared text long enough to say

In this room I see partners for promoting prosperity and peace on a range of economic, humanitarian, and security issues. We hope to extend our economic partnerships with countries who are committed to self-reliance and to fostering opportunities for job creation in both Africa and the United States.

Then it was time for one of those famous Trump ad-libs!

Trump: "Africa has tremendous business potential. I have so many friends going to your countries trying to get rich" https://t.co/UrQCwG8HuU

Africa has tremendous business potential. I have so many friends going to your countries trying to get rich. I congratulate you. They're spending a lot of money.

Donald Trump Threatens A Little Nuclear War At The UN. But So Presidentially!

Donald knows how to connect with people. All he has to do is toss in a personal perspective like that, or maybe threaten to rain down nuclear destruction. Strangely, the African leaders didn't seem to find it all that funny, almost as if that hasn't worked out terribly well for them in the past. Not getting the applause he thought he deserved, he returned to the text and repeated the "business potential" line and noted that "six of the world's 10 fastest growing economies are in Africa." To everyone's relief, Trump didn't add that he hoped to someday travel up Africa's beautiful Congo river and meet that great entrepreneur Mr. Kurtz. But he might want to bless the rains while he's there.

Trump later recited a list of achievements by various African nations which he had clearly never heard of before reading from his text, and invented a new nation, "Nambia," whose health system "is increasingly self-sufficient":

Trump, at a lunch with African leaders, refers to the non-existent country of "Nambia." pic.twitter.com/N8megnC1Xi

CNBC helpfully confirmed that "A White House transcript confirmed that Trump meant to say Namibia." Nonetheless, Yr Wonkette has learned that protests were lodged with the State Department by representatives from Namibia, Zambia, Narnia, and Freedonia. Also, Twitter was quick to grind the most obvious joke into the mineral-rich ground:

Today at the United Nations, Mr. Trump is expected to meet representatives from Germany and from the Czech and Slovak Republics, and to announce he supports the annexation of the Sudetenland.

Yr Wonkette is supported by reader donations. Click here to help us with our continuing mission to photoshop funny hats on Donald Trump.